How does AC LED Driver provide power to LED when input circuit is open?

Over on the Home Improvement Stack Exchange there have been several questions noting that an LED light bulb or lamp glows dimly when only one of its AC supply wires is connected. Here, here, and here for example.

These are not examples of leakage through a switch that is never truly off like a dimmer or a "night light" switch that glows when off. These examples are all where the AC input circuit is open. One side of the driver input is connected to a wire that has AC voltage when (elsewhere) compared to ground or when compared to an (also absent here) other wire. But no ground, neutral or other wire is connected.

These are also not examples of residual power stored in the drivers' capacitors or of inductance from nearby power sources. In these accounts, the bulb turns off instantly when the single leg of the AC circuit is disconnected but remains glowing indefinitely if it remains connected.

Apparently, the LED driver is able to consume power from an open circuit. How? What is happening here? My vague theory is that some part of the driver is using the capacitance of the air around it as a current path. Does that make sense? I do not know how the internals of an LED driver work. If you take an 8th-grade science class view of this, there is magic going on.

My question is: what is really going on?

This is due to a leak from capacitive coupling. In short, a charged wire might be able to charge a little more if it is close to a conductive material (it "pushes" a little further the electrons of this material). By doing so, a slight current is induced in the live cable, which subsequently generates a magnetic field. If another non-live cable runs in its vicinity, it will catch some of this field and a slight current is now induced in the neutral: the current travels for a few milli seconds. But because this is AC, then the electrons moving to the right will start moving slightly to the left as soon as the voltage reverses; thus repeating the previous steps, and so on: you AC circuit is "closed". The effect increases when the cables get closer to each other, and/or when they run parallel for a long distance.

The electric field effect (letting the electrons move a little further) can be modelled by a capacitor "closing" the loop. Note I put this into brackets because, as per the transformer example, a capacitor only lets AC run through, not DC. Here is an illustration, unfortunately the comments are in French, but the schematics of the circuits are enough to illustrate the purpose. (full article here) 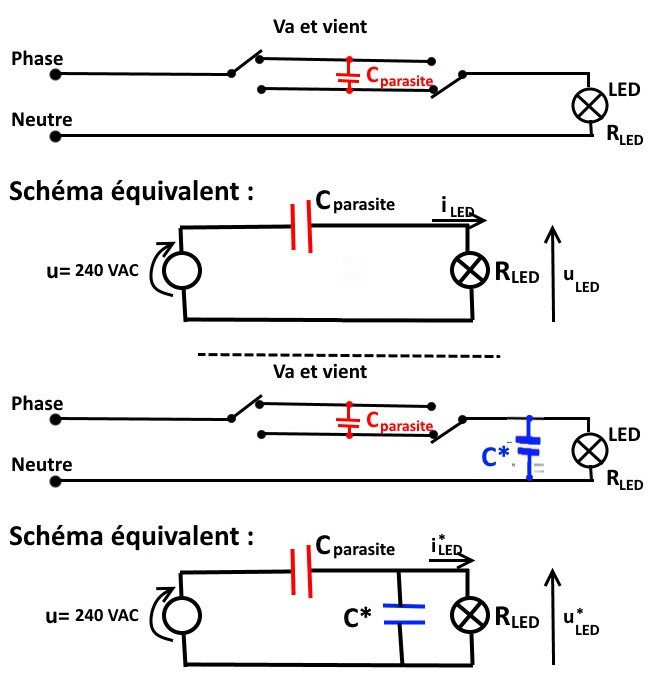 At the top you have a typical situation with two switches controlling the light for example from each end of a corridor: for the length of the corridor, you have two wires running parallel to each other. The schematic is the modelling of this situation.

Then the author of the article goes further: we add a real capacitor, shown in blue. Now, when the circuit is OFF, the leaking current goes through the LED and the capacitor: get a large capacitor and most of the current will prefer to go through it rather than the LED. When the circuit is ON, the capacitor is small enough that it rapidly gets fully charged, which means that the current then can only go through the LED. So choosing the right capacity of the blue capacitor is important: get it too low and you will not absorb the entirety of the leak, get it too high and you will needlessly waste power.

This effect was always there, but it is so small that incandescent bulbs would dissipate it before they became hot enough to produce light. With LEDs, which can turn on with only a few milliwatts, things are different and they do get sufficient power to glow a little.

Now, what do you have with this single-wire-to-an-LED circuit? One conductor is obvious (the wire). The other conductor is either the neutral wire from this cable, the ground wire from this cable, or the earth ground below you. (Which is tied to the ground wire by an earthing rod, usually.) Yes, those wires or earth are very far away -- but they do exist. And the air and/or carpet and/or hardwood floor surface and/or subfloor and/or wood framing and/or drywall/sheetrock, is the set of insulators.

This parasitic capacitor is going to be a very tiny capacitance, meaning it will have a very high impedance at the 60Hz AC frequency (assuming you're in the US). Because impedance in the absence of other resistors is equal to the reactance, which is \$X_c = \frac{1}{2\pi*f*C}\$, with f in hertz and C in farads. C is very small and f is 60, so \$ X_c \$ is huge.

But the input voltage is pretty big too. So the current may not be negligible -- it may, in fact be enough to light up the LED.

Note that as \$ f \$ approaches zero, resistance approaches infinity; this is why if you apply DC to this circuit you will never see the LED light up.

This is basically what @winny said in a comment on the original question, but fleshed out a bunch. That comment got me thinking about this in the right frame of mind to understand what's happening.

Not the answer you're looking for? Browse other questions tagged led-driver or ask your own question.

5
LED lamps keep glowing when dimmer is turned off

9
Explanation of LED driver circuit
0
Less noise when not following LED Driver datasheet
0
How to troubleshoot led panel
2
LEDs intermittently non-responsive to short multiplexed pulses after high reverse voltage?
0
Led driver interference on lcd screen but only when with 1 power source
1
Trouble getting AL8861 LED Driver to illuminate LEDs
1
Inverted LED driver circuit
4
36x LED 5730 in series: diodes burnt when LED driver (based on BP9833A or MT7854BD) powered up
1
How to use YX8122 led driver?