I have a (third-party) device that has failed EMI testing, and have been asked to investigate the cause and fix the issues. The device is an automobile accessory, and has 12 V DC power input. Internally, this 12 V DC is converted to 5 V through a DC/DC converter, which powers the circuitry and also charges an internal LiPo battery.

The EMI issues are clearly coming from the 12 V -> 5 V DC/DC converter, as the noise disappears when the device is disconnected from 12 V and powered directly from it's internal backup battery. Reconnecting the 12 V DC supply, the measured noise also increases approximately 10 dB when the device is charging the battery (total load on SMPS is 500 mA @ 5 V) compared to when the battery is full or disconnected (total load on SMPS is only 50 mA @ 5 V).

The EMI issues are all in the band 150 - 180 MHz. The DC/DC converter switches at approximately 570 kHz. I have purchased a spectrum analyzer (Signal Hound) and near field probes (Tekbox) to attempt to observe the radiated emissions. My measurements are the same as the reported measurements that caused the device to fail the EMI testing, but I don't understand what I'm looking at, and have several questions on how to interpret them. These measurements were taken with the Tekbox 20mm H-field probe parallel to the board, directly over the SMPS, with about 5 mm separation, and using a 20 dB preamp (Tekbox TBWA2): 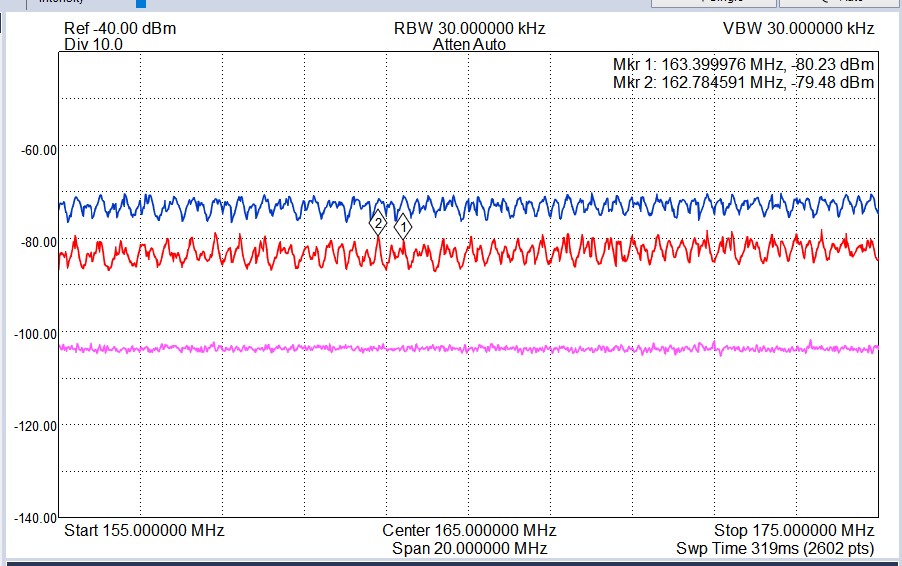 As can be seen, there is a massive increase in the noise level across the whole band when the SMPS is powered on, and it increases proportionally to the current flowing in the circuit. There are also peaks and troughs roughly every 600 kHz, the fundamental frequency of the SMPS circuit.

I have taken a cursory glance at the SMPS circuit and layout and it seems to follow good design principles: the switching loop is kept as small as possible, the inductor is a shielded type, there is a ground plane directly underneath and plenty of via connections, and also a ground pour on the top (component) layer.

You need to understand that the BW of pulses is dependent on the current rise time. Ideally they want risetime as short as possible to minimize conduction losses such as <<1% of a cycle. Although the -3dB BW is = 0.35 / risetime it does not limit or define the harmonics at -30 dB or even -60 dB.

â€” This will reduce emissions significantly from being conducted then radiated on external cables and chassis.

Not the answer you're looking for? Browse other questions tagged switch-mode-power-supply emc spectrum-analyzer or ask your own question.