I was reading some articles online where it talked about this kind of RC oscillator.

I just want to clarify some caveats about this circuit:

From: https://learnabout-electronics.org/Oscillators/osc31.php it says: "even though using four filters does give slightly better frequency stability" while this article says: "By cascading three or even four RC stages together, the stability of the oscillator can be greatly improved."

I see a contradiction here. Which article is right about having better stability with 4 stages rather than 3? Does having 4 stages allow for greatly improved stability or just slightly better?

The second thing that I wanted to clarify/know about is the loading effect of the RC stages and its performance and stability/reliability of the circuit. It says here:

But because this formula is based on calculations for individual filters, it does not fully take into account the effect of connecting the filters in cascade, which causes of one filter to be 'loaded' by the input impedance of the next, as shown in Fig.3.1.3, where the input impedance of filter 2, made up of the reactance (XC) of C2 and the resistance of R2 effectively changes the value of the output resistor of filter 1 (R1) as they are effectively connected in parallel with it.

Could someone go into more detail about this and talk about how it affects the performance and stability/reliability of the circuit?

Have a look at the TI publication "Sine-Wave Oscillator":

It's an excellent reference for designing phase-shift oscillators with RC components. I'll be referring to that in my answers.

Figure 2 from the paper shows plots of phase shift \$\phi\$vs. frequency \$\omega\$ for different numbers of stages. The stability of the oscillator is related to the derivative \$d\phi/d\omega\$ at the point where \$\phi\$ equals 180 degrees: 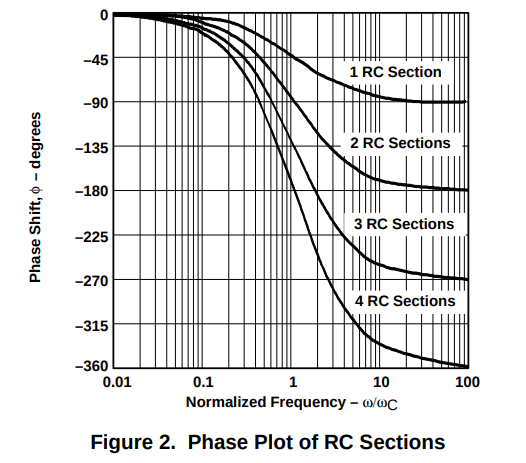 Adding more stages makes the slope at that point steeper which is better for stability. For instance, consider some noise which introduces a 1 degree phase shift into the system. In a four-stage oscillator the change in \$\omega\$ will be a lot smaller than it would be in a three- or two-stage system.

Why is four stages preferred over more stages like 5 or 6?

It has to do with a lot of practical matters:

Op-amps conveniently come in 4 device packages. If you used 5 or 6 stages you might be wasting devices.

See Section 8.4 in the TI publication for an example of a four stage oscillator producing quadrature signals.

What is loading and why should I be worried about it?

When we analyze an RC-filter we usually describe it by saying it has a certain cut-off frequency and a certain phase-shift graph. However, that characterization is only valid in the absence of any other circuitry. Once it is in a real circuit it's performance will be influenced by the following stages.

This SE answer delves into the math of the loading effects of multiple RC-stages:

The most common way to mitigate the effects of loading is to use op-amps to buffer each stage as shown in the figure above. See section 8.3 in the TI publication for more advice on how to do this.

Which article is right about having better stability with 4 stages rather than 3?

They both say basically the same thing. One says "slightly better" the other says "greatly improved".

The reality is that stacking RC stages only decreases the frequency rolloff rate of the filter, and in real circuits doesn't do much to improve the quality factor (or the oscillation frequency) because of parasitics.

You can see this in the diagram below, one RC filter gives a -20dB/Dec rolloff in slope, two gives -40dB/Dec. This filter is used to regulate the oscillator, adding more poles doesn't do much to actually change the frequencies that feed back into the oscillator (pass band) 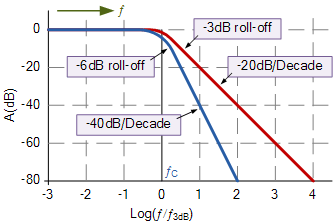 As far as loading goes, the more filters you add in series with real components, the worse your pass band gets. The way to get around this is to use active filters (like the buffered phase shift oscillator in the link above), but also uses more energy as the amplifiers regulate the voltage on the components to give an output similar to what ideal components (components that don't have parasitic resistance, inductance, capacitance) .

Not the answer you're looking for? Browse other questions tagged capacitor resistors oscillator stability performance or ask your own question.