Oli's excellent answer and circuit indeed make the duration between discharges linear wrt the control voltage. However it's not clear to me how to scale the input as suggested. Even with a large capacitor the control voltage range is narrow and the circuit throws a huge amount of current around.

I have another circuit that I believe also correctly linearizes the period based on the size of a resistor (e.g. a potentiometer): 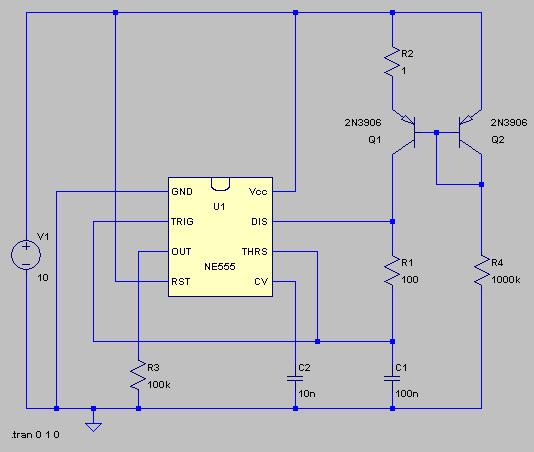 Could a current mirror like the one above with a different ratio be used to scale the control voltage / resistance? How?

Note that I think adding an emitter resistor (R2) to the load will scale down the current (wildar current source?) but it also seems to ruin the linearity.

Here's another version. That string of parallel transistors provides a 4:1 ratio step-down current mirror so that resistors can be smaller. It also makes the control current relative to ground which is nice depending on how you power your op amp.

Despite the extra parts, the're mostly transistors so the build is probably not as complicated as the schematic looks.

You would be better using a microcontroller with a crystal for this, since the accuracy would be much much better. However, here is a (very rough) 555 based circuit I threw together, that uses a constant current source to charge the cap - it's very rough but does approximately 100mV/Hz from 9V downwards (e.g. 8.99V = 0.1Hz, 8.9V = 1Hz, 7V = 20Hz)
You can tweak it to scale the V/Hz as desired (and also tweak the cap value and pulse time (remember this doesn't change so ideally is short to stop the error becoming large as the frequency increases), generally tidy things up a bit) A rail to rail (ideally precision) opamp would be needed. 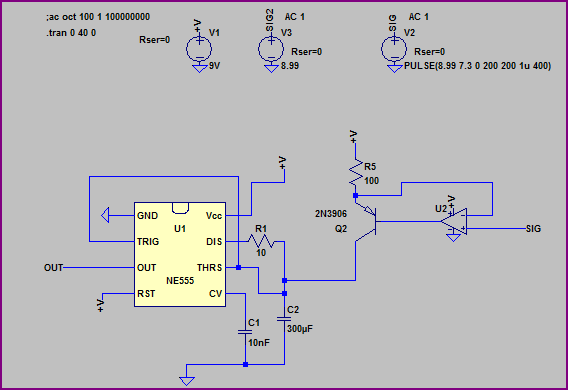 Simulation of the voltage control dropping and frequency scaling linearly:

Here's an improved version which uses a Wilson Current Mirror and a smaller capacitance, so a precision capacitor and trim cap can be used. I set it up for 0.45V/Hz, so with 9V and the 10 turn 10kΩ pot you will get 2Hz per turn (up to 9V = 20Hz in theory - in practice the current source compliance will limit things to around 17Hz, which is okay, but the pot cannot be fully turned all the way to 9V or the current source will "drop out")
So again, as it's a "rush job" things will need tweaking a bit to suit.
The large linear range is difficult to handle with one pot, so the slower range will be harder to set - it may be worth having another range resistor, to switch in for the lower range (e.g. to set it up for 0.45V/10mHz or similar)

Anyway, here it is (pot upper/lower represent the pot):

A linear scale on a metronome is not the good thing that you imagine it to be.

When you turn the dial halfway, from 1 bpm to 500 bpm, the metronome has gotten 500X faster.

Then, from there, when you turn it all the way, it only gets twice as fast.

The ideal metronome control would have the same geometric effect for the same turn angle. I.e. regardless of where we are on the dial, if we turn the knob five degrees to the right, we get about the same percentage speedup. And that is exponential behavior!

Just design the panel artwork for the knob so that it it matches the behavior.

I would suggest that if you want to use a 555-style device to produce a relatively-linear metronome, you should build a circuit which will charge the cap at a rate proportional to your control voltage, and have the 555 discharge the cap as quickly as practical so that even at the highest tempo setting its discharge current will swamp your charging current.

The fact that the discharge current will not be infinite will cause the control response of the described circuit to be slightly non-linear, but provided that the discharge current is an order of magnitude or so above the charging current, the control response should be adequate if you don't have to place your metronome markings perfectly uniformly. If you need something better than that, you will probably have to arrange to have your control voltage affect both the charging and discharging currents. Such a thing can be done, but is apt to make the circuit more complex.