I have a cicuit here that's giving me trouble when finding out what V1 and V2 equal.The book says that I1 is traveling through the 8 ohm resistor (R1) towards ground. But when I build the circuit on multi-sim it says that I1 is traveling through (R1) upwards "clockwise. I'm confused why the book says I1 is counter clockwise and my simulator says clockwise. 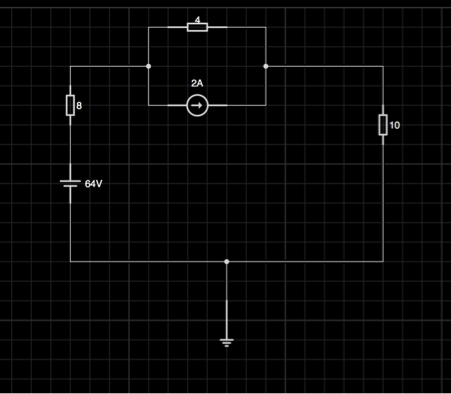 The book says that I1 is traveling through the 8 ohm resistor (R1) towards ground. But when I build the circuit on multi-sim it says that I1 is traveling through (R1) upwards "clockwise. I'm confused why the book says I1 is counter clockwise and my simulator says clockwise. ... I always seem to be confused on how to determine the direction of the current.

You don't need to know the direction of the current before you solve the circuit. You can guess whichever way you want. If the current is actually flowing the other way, you'll just get a negative number for the value of the current.

In the example in the book, what was the value they found for I1? If it was negative, there's no contradiction with the simulation result.

If I1 is the current from the voltage source there is no contradiction. All paths to ground from the 64V source flow - upwards - through the 8 ohm resistor.

Nodal analysis is the application of Kirchoff's Current Law (KCL) to solution of circuit node voltages. KCL basically says that all currents into a node (any branch or junction between components) equals the current out of the node. It has to be this way because otherwise the charges would pile up in the node, and the circuit would just explode :^) . It may seem counter-intuitive that by using KCL you end up focused on and solving for voltages, but that's the way it is.

To use KCL you need to choose a current flow convention. There are only 2 possible:

It doesn't matter which of these conventions you choose as long as you are consistent. Consistency may be the hobgoblin of little minds, but those hobgoblins are essential for Nodal analysis to work.

After choosing a current convention, make a process to follow.

Let's use this process to solve your circuit. First I'm going to make a couple of name changes: calling the battery voltage \$V_B\$ (not E), and calling the current source \$I_S\$ (not I). I'm going to choose the convention of current out of the node being positive. (I like the positive out convention because it makes it obvious at a glance which node the equation is covering. For example, if the equation is for node 2 ( \$v_2\$ ) then in each term of the equation \$v_2\$ will be first and positive.)

Not the answer you're looking for? Browse other questions tagged dc current-source circuit-analysis or ask your own question.

4
When using nodal analysis of a circuit involving CCCS, how do you know which currents are entering and which are leaving?

1
KCL Node Analysis
6
Trouble finding Thévenin equivalent for this circuit
0
node analysis with current source
1
Confusion on relating AC ground and current direction in AC analysis
0
Resistive circuit analysis with dependent current and voltage source
0
How to find the voltage of a capacitor in a Op-amp + RC network?
3
Determine the nodal voltages in the circuit
1
Circuit Analysis and Voltage
0
Circuit analysis with a dependent current source
0
Help solving circuit with Mesh Analysis and Current Source