We are controlling an old RC car using a Pi Model B+ V1.2. We have two RS-380SH motors wired in series controlled by an IRF520 mosfet. As the Pi's PWM signals are only 3.3V, we are using the L293D H-bridge to boost it to 11.1V to drive the mosfet - see attached schematic.

After assembling, everything worked perfectly for a few minutes until the dreaded smoke. We determined that the H-bridge blew, as there is a short between its VCC2 and GND pins.

We're really surprised that this is the component that failed, as it's only boosting a signal and shouldn't have much current going through it at all! Further, the data sheet specifies that it's rated for up to 36V, so we should be well within its spec.

Our question is - what went wrong? Why did we blow our H-bridge? Is our schematic missing something? Why did everything work fine for a while before blowing?

If we understand correctly, there should only have been very little current going through the H-bridge - around 1.2mA since we are using R2 as a pulldown resistor. 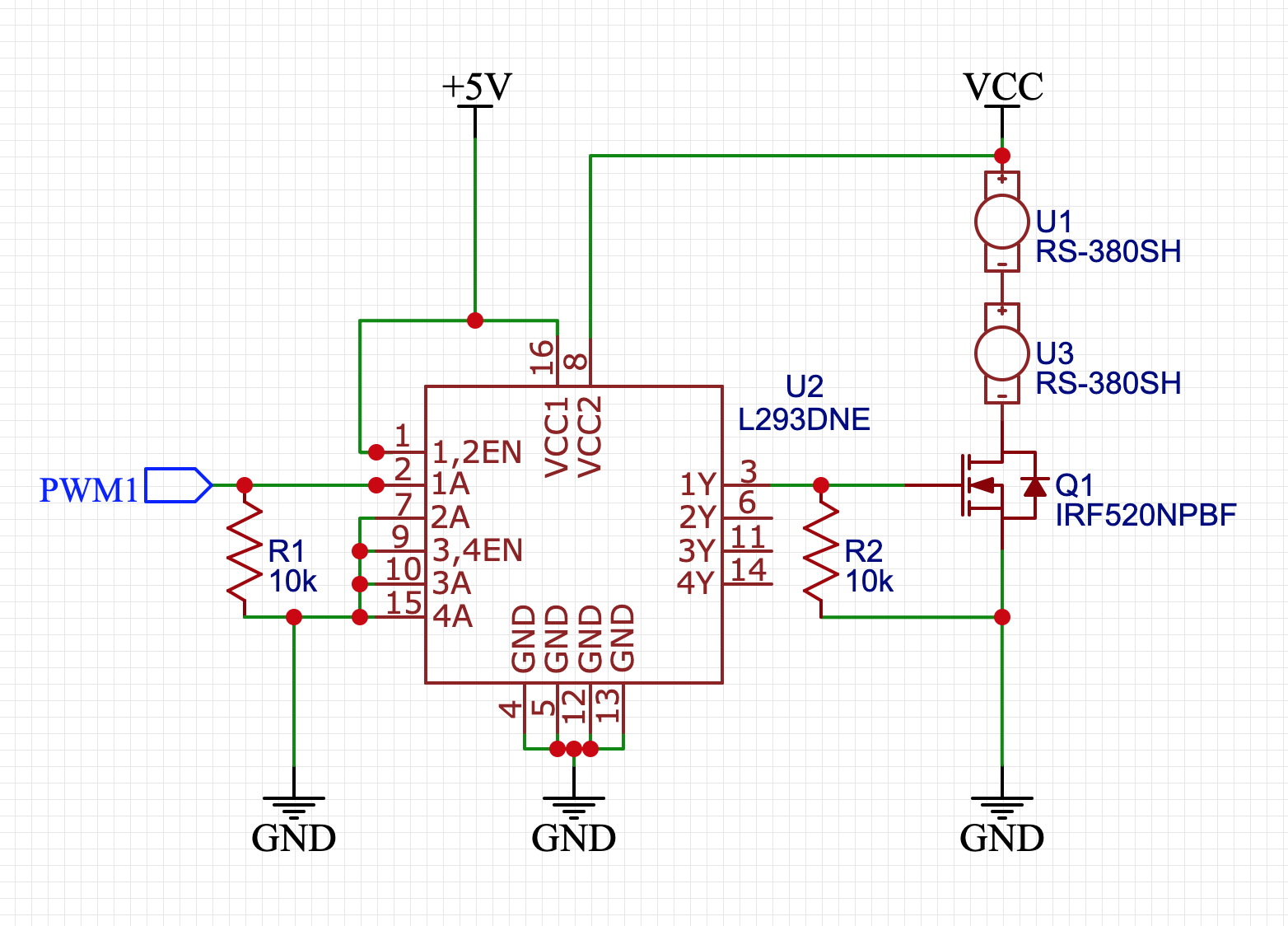 The IRF520 MOSFET is rated to withstand voltage peaks of up to 100 volts and given that you took no care in ensuring the supply wouldn't glitch to this sort of level when loads are turned off (i.e. parasitic cable inductance in the feed to the motors from the battery), then there's a distinct possibility that the L293D (maximum rating of 36 volts) sacrificed itself to save the MOSFET.

Adding a capacitor across the power rail close to the battery feed to the upper motor and the source of the MOSFET would catch any inductive energy in the feedline from battery to motor. You should also add reverse diodes across the motors as well because you need to fix that potential back-emf problem as well.

Not the answer you're looking for? Browse other questions tagged circuit-analysis dc-motor schematics h-bridge motor-controller or ask your own question.

13
Can I wire the two sides of a L293D Dual H-Bridge together if I only need one H-Bridge?
1
Can I stack two l293d h-bridge IC's to drive more current?
1
L293D maximum current with heatsink
0
Help building a scheme (involves L293D H-bridge)
0
How to Power a Controller and Motor Driver off same 24V source
0
Why did starting a motor burn out my power regulator?
0
Why did I burn my L9110s H bridge
4
H-bridge low side current sensing: Current signal with oscillation why?
1
Difference between h-bridge, dual half bridge and quad half bridge
6
Why is only one channel of my dual H-bridge motor driver design failing?