Is it possible to add an encoder to a continuous servo to control its position, and if so, how?

Also, can I add a thing to block the motion of the servo like the picture below or would having such a stop effect and damage the servo? 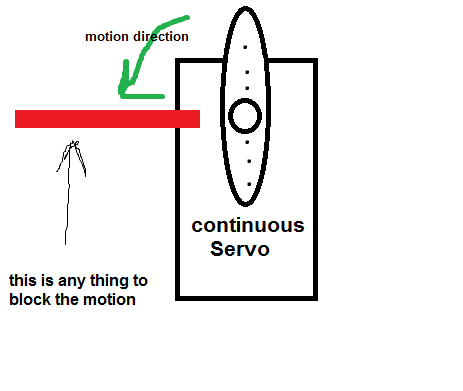 Yes, a rotary encoder can be added to any motor, including a servo that has been modified for continuous rotation, and used for position control.

However, this is a bit counter-intuitive, since the servo's internal circuitry already provides position control, using the integrated potentiometer as a rotary sensor. Disconnecting this positioning mechanism, then adding an external position determination sensor or encoder to achieve the same result seems unnecessary.

Be that as it may, the usual method to obtain such position control with a rotary encoder involves bonding the rotary encoder to the shaft of the motor, then taking the encoded values into a microcontroller, using a PID algorithm in the microcontroller, driven as a function of this position information, to control voltage and polarity of the motor for bringing the motor to a halt at the desired position.

In very simplified terms, if the servo's detected position, courtesy the rotary encoder, is clockwise to the desired position, the PID algorithm would rotate the motor anti-clockwise until the two positions are identical. Vice versa for detected position being anti-clockwise to the desired position. If any external torque moves the shaft away from the rest position subsequently, the rotary encoder feeds fresh angular data to the PID code, which then applies the logic outlined above.

Regarding addition of a mechanical stop to a servo motor, this is a feasible approach in general - the motor will draw its stall current, which is higher than normal operating current. You do need to check the datasheet of the motor in question to verify how long it can withstand stall current, though. Not all motors can cope with constant stall.

The solution in such case can be one of the following:

The only servos that "lack" movement or position sensing are cheap hobby servos. Those are the worst kind to use for any kind of rugged system. Not only do they only read feedback over a partial arc (not 360 degrees,) but they also don't even return any feedback to the commander at all.

You can buy higher-quality servos with real position encoders, real current sensors, PID controllers for motion control, RS-485 serial communciation both ways, and much more. Those servos can "go to a point" or "rotate at a speed" or do any other kind of motion you want.

For example, I'm putting this guy in my current project:

It's still a "hobby" style servo, but quite capable and so far, real

Not the answer you're looking for? Browse other questions tagged motor servo encoder or ask your own question.

0
Motor of what type should I choose?

2
Can the board inside a hobby servo be repurposed to drive an external DC motor
5
Can a motor's movement be improved to any arbitrary resolution?
1
How to determine the rotation direction, rotation angle and rotation speed of a stepper motor and a servo motor
1
Step/Dir input Servo Drive: how does it work internally compared to a serial input drive
0
TowerPro SG90 servo motor: adding analog feedback
0
Implement a speed controller for a cascaded position controller
3
Servo controller
0
Choosing an Encoder Resolution
1
How to handle rotary encoder overflow