I'm building the Arduino spaceship interface from the project book and everything works fine. It involved connecting 3 Arduino outputs to 3 leds, and 1 Arduino input to the a switch. For a photo of the setup, please see here: http://imm.io/V5oh 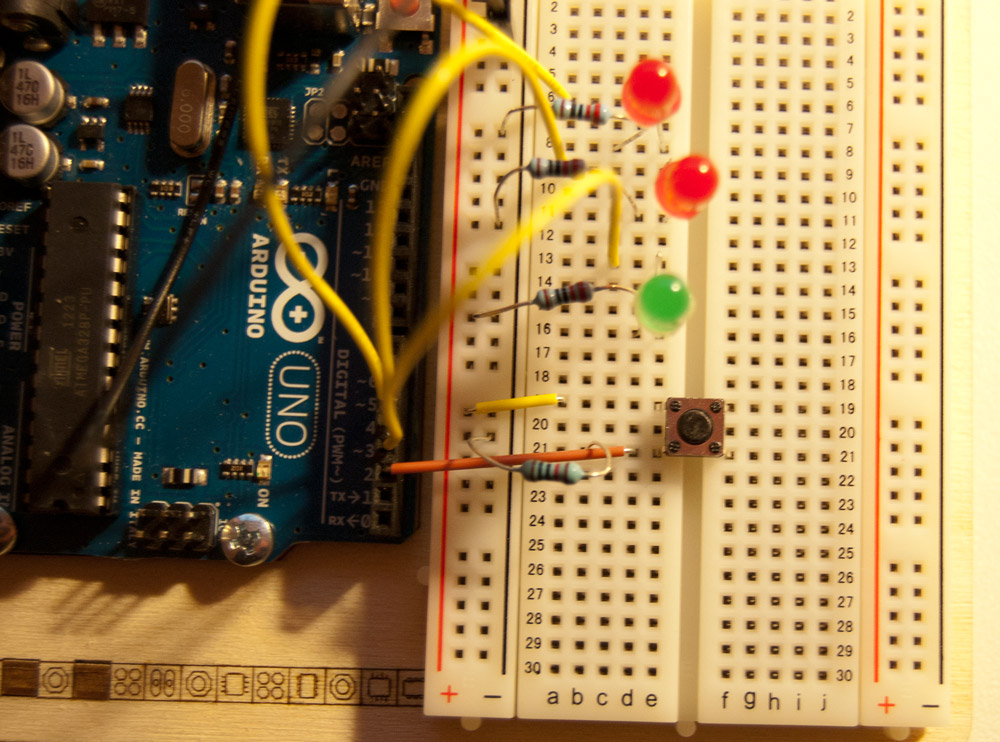 The Arduino input is connected between the push button and the 10kOhm resistor.

My question is: Why is the 10kOhm resistor needed? The manual says it is needed so that the Arduino "reads LOW when there is now voltage coming in through the switch".

Could I not simply get rid of the resistor completely (just replace it with a wire), then if the switch is open, it will still be connected to the ground and still read LOW? What is the resistor actually doing, if anything?

Without the resistor, if you press a button, you'll short 5V to 0V and BAD THINGS will happen.

On another hand, if we leave bad things for a moment as a thought experiment, what level would arduino read?

The voltage at the + would be defined by the ratio of resistances of wires going from 5V and 0V to a + point. This would be tricky to set up properly, so it's better to put a big resistor (much bigger than wire resistance) and have the result predictable.

by BAD THINGS I mean - what does happen when you short a battery? In theory unlimited current flows from positive terminal to negative, in reality this current is limited by internal resistance of the battery, battery heats up, potentially explodes or leaks. If you are powering from USB - usb circuitry inside computer fries (this rarely happens as computers usually have protection circuitry). If you are powering circuit from a wall-wart adapter, a fuse in it might blow or it can catch a fire if it's of some extremely crappy chinese origin. If your power supply is strong and robust enough (like lead acid battery or lithium cell), a power trace on a PCB can burn off. In this particular case nothing bad would happen - arduino has a resettable PTC fuse on board, it will just reboot.

The correct way to wire things is this: Pin-button-Gnd. No 5V involvement.

That uses the internal pullup resistor, no external components needed, and takes away any chance of shorting 5V to Gnd and damaging the 5V regulator, or blowing the USB fuse, etc.

Not the answer you're looking for? Browse other questions tagged arduino resistors pulldown or ask your own question.

7
Why the use of resistors when pulling something up or down?

19
Pull Down Resistors
2
How can I get this to not read an arduino digital input?
1
Simple low voltage disconnect circuit for Arduino
1
What are the mechanisms at work in a pull-up or pull-down resistor circuits with a push-buttons and a GPIO?
6
MCU pull down input push button with interrupt ESD issue
0
Can this active-high scenario be achieved without an external pull down resistor
1
Read the state of a 12v illuminated switch from an Arduino Uno
0
Voltage spikes on Arduino Input affecting digital and analog readings
2
Why does the position of the resistor matter here? (Arduino)