Why are most COB LEDs physically yellow?

Many "LEDs" found on devices nowadays appear to be yellow where the light comes from (when the device is off). Why yellow?

I put LEDs in quotes because COB leds can consist of many individual LEDs in an array/grid. In my example photo below, you can see a 5x3 grid of LEDs - all contained in a single yellow rectangle. The light emitted is actually a cool white (a slight blue tinge). 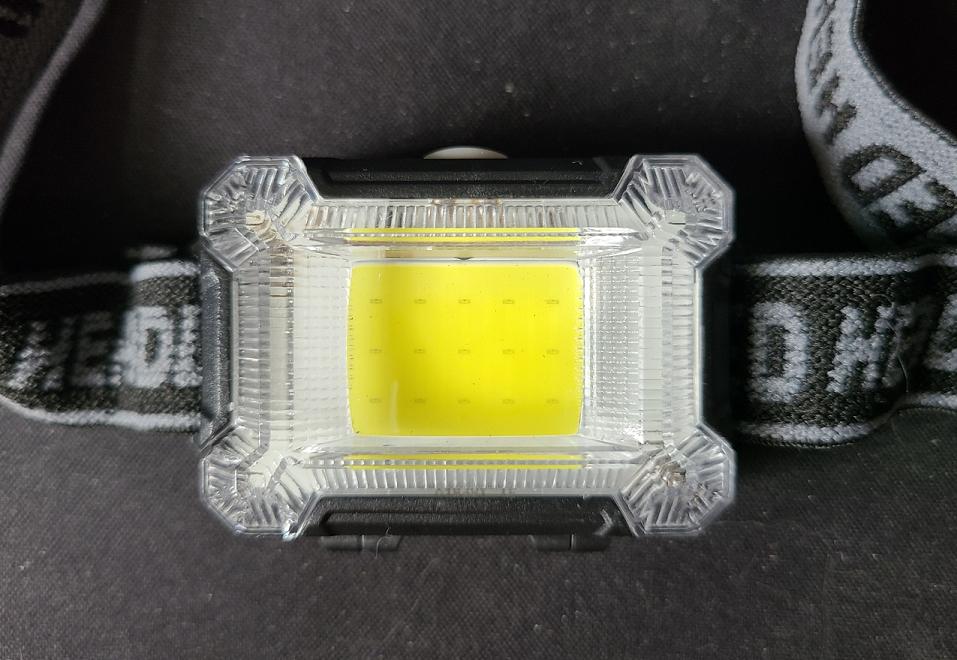 Because white LEDs do not actually exist.

The yellow you are seeing is a phosphor (a substance that absorbs light of one color and emits it again in another color) known as cerium-doped yttrium-aluminum garnet (Ce:YAG). It is used for white LEDs because there is no way to create a genuine white LED. Instead, a blue LED is coated with a phosphor which converts some of the blue into yellow. The mixture of the phosphor-generated yellow and the LED-generated blue which leaks through is perceived by us as white light.

The reason it looks yellow when it's off is because it's converting some ambient blue light to yellow. The reason why the white light it emits is on the blueish side when it's on is because it was designed by the manufacturer to have a "cool" color temperature by decreasing the relative amount of Ce:YAG. When a manufacturer wants the light to appear "warmer", they use a higher portion of Ce:YAG, decreasing the amount of blue that gets through and increasing the yellow.

The actual LEDs are probably blue and the encapsulation contains phosphors to generate the rest of the spectrum. The phosphors used will appear yellow. 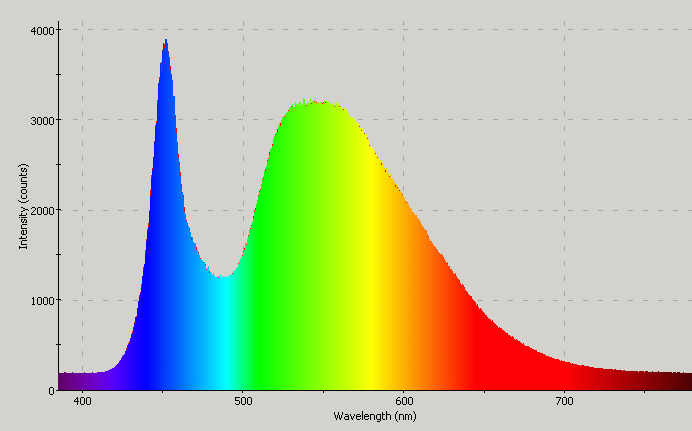 Figure 1. The blue peak is direct emission from the LED. The hump in the green to red part of the spectrum is generated by the phosphors. Image source: Physics.SE.

Note that if the LED is not powered there will be no blue emission or reflection whereas ambient light will cause some fluorescence of the phosphors.

YAG phosphors are doped Cerium which is a yellow phosphor to provide the highest efficacy in converting Blue light to Yellow light. When the emissions are nearly equal, we call it neutral white with x,y=0.31,0.31. With more yellow phosphor emission it also absorbs about 10% of the blue emissions and the CCT is lower or “warm” and with less the CCT is higher than 5000’K and called cool. There may be trace amounts of other phosphors slightly raise the x or y coordinate.

Since the thickness is so low in the phosphor it is a very difficult process to control to obtain a tolerance of +/-500’K without some yield loss yet some such as EOI, Samsung and CREE are able to have more consistent narrow tolerances in much smaller bins defined by xy colour coordinates. These are companies who make their own wafers. Most others just buy the wafers then slice and dice into chips. This has steadily improved in the last 15 years but active testing with binning provides the tightest tolerances when the application has critical specs, such as for TV backlights and automobile headlights.

There also exists lamps with remote phosphors, putting the YAG in the plastic diffuser cover. This lowers the temperature rise at the front of a LED.

The light from these lights is perceived as a neutral white light because the yellow light stimulates the red and green rods and cones. But for reflected light the absorption of the surface colours renders a product of emmittance and reflectance that we see. The present CRI index uses pastel colours to measure the colour rendering reflectance index which makes Triphosphor fluorescent lamps look favourable to LEDs but the latest 10yr old NIST standard has been slow to be adopted due to industry pressures. This is based on saturated colour rendering which gives tricolour RGB lamps a distinct advantage.

Yet the yellow YAG phosphor over BLUE LEDs continues to yield the highest Lumens per watt efficacy for white light.

Although the CCT depends somewhat on the substrate parabolic reflector cup if used and scattering effects on the phosphor, you can see on the left that as more phosphor energy is increased the Blue energy is decreased and when they are perfectly balanced which was historically difficult, the white appears neutral to the eye. Thus initially LEDs were only warm or cool. But since 15yrs ago, I have been able to source any CCT in the middle range like 4000’K, 4500’K and 5000’K with a tight tolerance on high intensity and Vf at the same time and according to customer requirements. 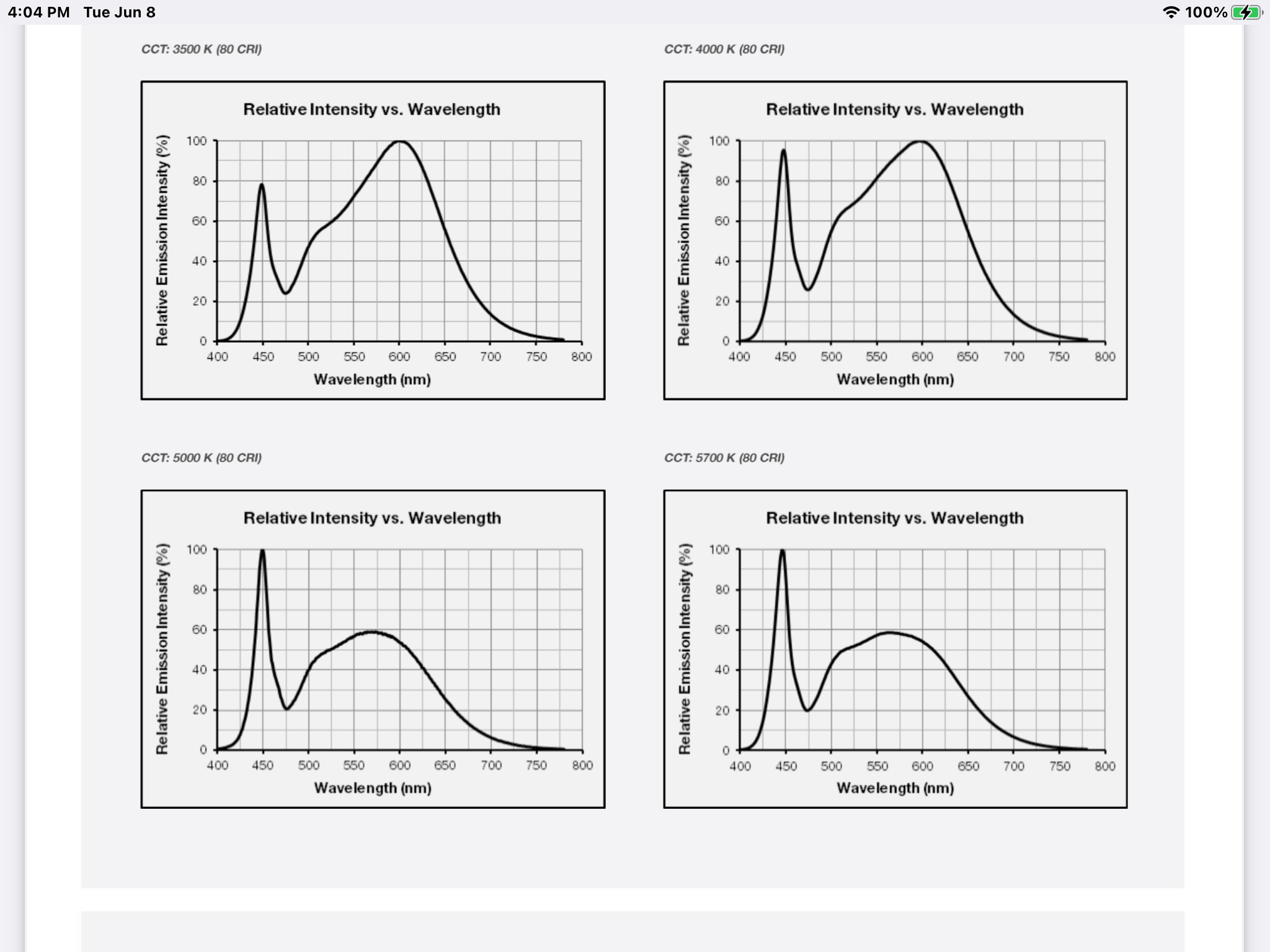 Samsung LEDs now come in hundreds of bins for CRI 80 or 90 +/-3 with efficacy from 120 to 150 increasing at higher CCT but reduced at higher CRI. But you need to order with a large MOQ if you want special parts.

The yellow color is caused by a phosphor that transforms blue light into yellow light. This phosphor works with the light emitted from the LED but also with daylight shining on an unpowered LED.

To avoid the activity of the phosphor you have to look at the LED under light without blue wavelengths. If you use a mixture of green and red light it will look yellow anyway as red + green light mixes to yellow for the human eye. So if you use only red or green light alone, the LED will look red or green only.

Not the answer you're looking for? Browse other questions tagged led manufacturing optics chip-design or ask your own question.

5
Why are high power LEDs categorized by wattage, not voltage & amperage?

4
LDR + RGB Led = Color sensor. How to calibrate it?
1
Choose the right resistor for your RGB led (calibrate the colors)
5
Parallel LEDs in CoB-like array
2
Driving power LED modules in microsecond regime
40
Why are LEDs on most embedded designs inverted?
1
Why are there no high intensity tri-color LEDs that have red, yellow, and green?
55
Are LEDs better than we think?
1
High power LED array
1
Adding a waveform on top of an LED driver signal