Working with a 2nd order Sallen-Key high pass Butterworth filter with a cutoff frequency of \$f_c=0.5\$ Hz I am having difficulties making sense of a result that I got:

After applying at its input a square signal with its first harmonic having a frequency of \$0.1\$ Hz < \$f_c\$. First the output signal surpass the input signal (overshoot) and then gets attenuated:

Edit: The filter schematic is the following: 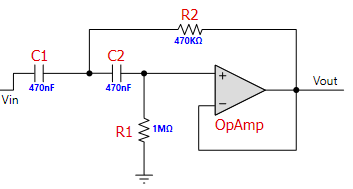 Initially the output signal follows the input exactly and goes up by the same amount relative to their current baselines. However the output signal quickly 'sags' back to the baseline as each capacitor in the filter charges, with a small undershoot caused by the second capacitor charging less due to the reducing output voltage from the first capacitor.

You could argue that this is 'overshoot' because an AC square wave goes above and below its true baseline and so has a lower amplitude, but in this time frame we (and the filter) cannot know that. It could just be a single step going from low to high voltage, and the filter has neither the 'clairvoyance' to see into the future nor sufficient 'memory' to account for what might have happened in the distant past.

What's confusing me is that this overshooting may be related to the first harmonic (along with the higher frequency ones). 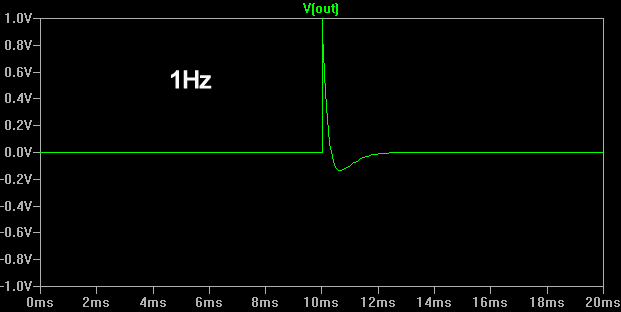 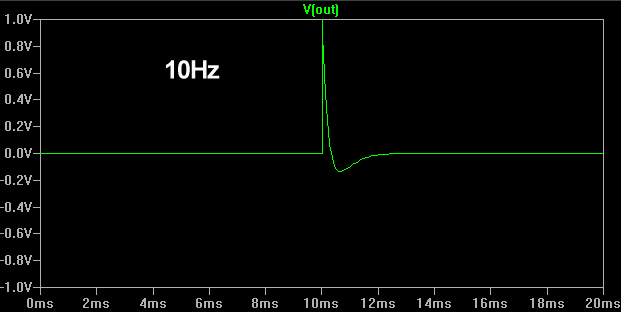 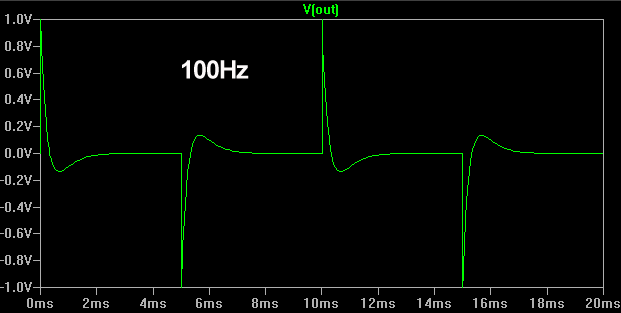 It makes virtually no difference to the impulse waveform whether the lowest harmonic is 0.1Hz, 1Hz, 10Hz or 100Hz. You could remove those lower frequencies entirely and the waveform wouldn't change much. It's not just some effect of being an 'active' op amp based filter either, a similar waveform is produced even with a passive RC filter:- 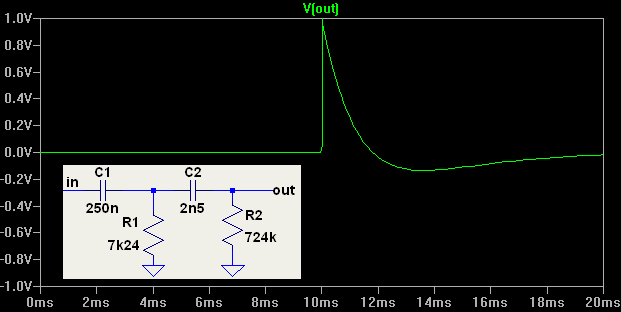 You are looking at the typical step response of a highpass filter. You can start with the prototype Butterworth highpass transfer function and determine its step response:

And this is how it looks like when plotted (does it look familiar?): 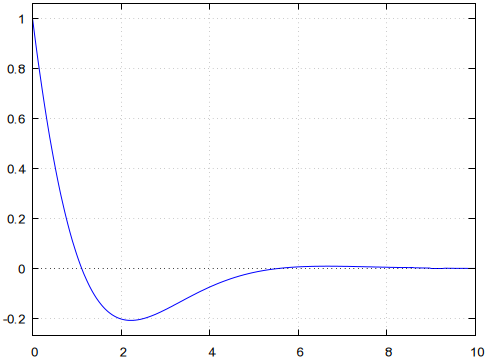 Not the answer you're looking for? Browse other questions tagged filter step-response sallen-key or ask your own question.

2
Transfer Function of Bessel Filter
0
Signal integrity in active filter
0
How to determine the corner frequency needed?
2
Low-pass Filter with zero drift amplifier
14
Active low-pass filters — good to what frequencies?
0
Sallen-Key LPF Q factor and gain
1
How does an active filter transfer function translate to a block diagram?
3
Why is the output of a high-pass filter not 0 when the input is 0?
1
Does unity gain Sallen-Key filter fulfill Bessel filter approximation?