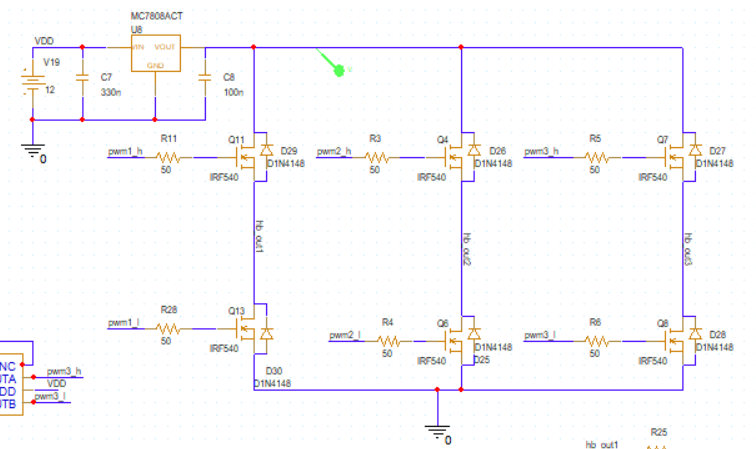 I designed a 3 phase H bridge to be supplied with 8V from a LM7808 voltage regulator while the origin voltage source is supplying the MOSFET (IRF540) gates with 12V. I noticed that the voltage coming from the regulator towards the drain of the high side MOSFETs are choppy like the PWM signals that I feed through the gates.

How can the regulator give the high side MOSFETs constant voltage instead? The picture below shows the high side gate signal pwm1_h (at the time the voltage level for VDD was 18V but the same issue occurs when the voltage is lowered): 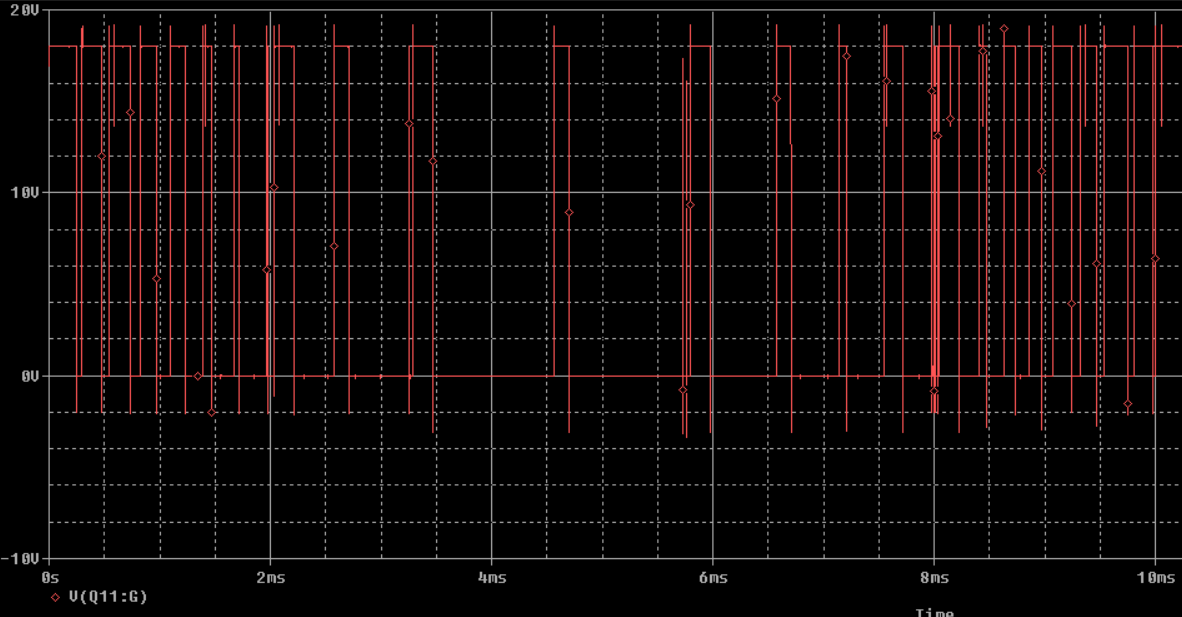 [Complete picture] The PWMs are generated with 555 timers together with a sine reference for 50 Hz and a 2 kHz switching wave. The PWMs are then sent to a TSC428 driver to increase the voltage level to be higher than the threshold voltage of the IRF540 (4V). The TSC428 has one inverted and one non-inverted output. These are then sent to the H bridge as pwmX_l or pwmX_h. 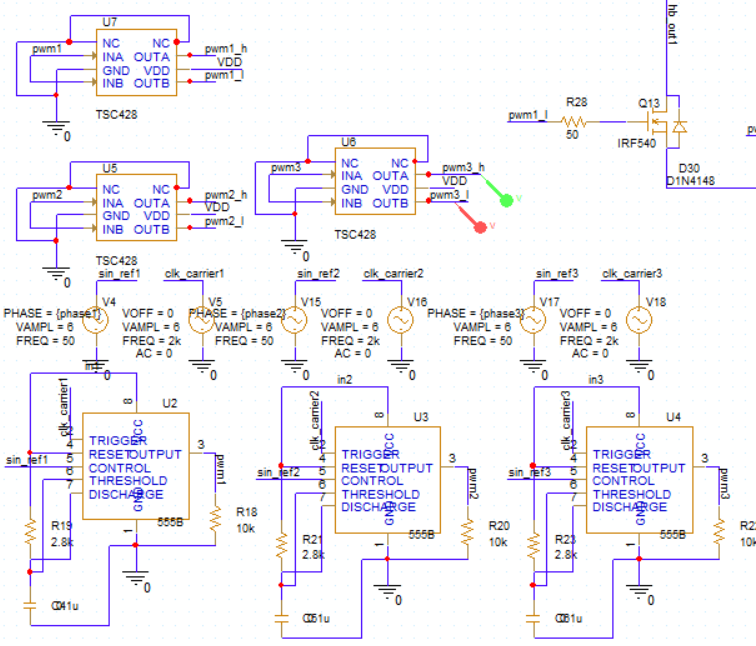 Your MOSFETs don't seem to be driving anything.

The way you have it set up, each MOSFET pair (for example, Q11 and Q13) will be turned on at the same time on the PWM edges if you don't allow any dead time. That will cause a short circuit on the 8V supply - which is what you see in the scope displays.

Now that you've posted a more complete circuit and some details, the problem is definitely "shoot through."

The TSC428 has one "normal" and one inverted output. You are driving both from the same signal, which means that the two transistors in a half bridge will transistion at the same time.

Those transistions overlap for a very short period. During the overlap, both transistors are conducting. The transistors short the power supply (the 8 volt regulator output) to ground.

The TSC428 provides an easy way to generate the inverted signal from the PWM, but it doesn't do anything to prevent shoot through. For that, you'd need to use a dedicated H-bridge driver that guarantees that the outputs don't overlap on the transistions. This "overlap avoidance" is referred to as "deadtime." This is the amount of time between switching one output and switching the other. Only one output transistions at a time so that shoot through is avoided.

Your 7808 protected your MOSFETs. It couldn't deliver the current the short circuit demanded, so it shutdown. That kept your MOSFETS from blowing when the shoot through occurred.

Not the answer you're looking for? Browse other questions tagged voltage-regulator h-bridge or ask your own question.

10
Why have my MOSFET drivers blown in this H-Bridge?
0
Will this H-Bridge and it's driver work?
2
H-bridge mosfets exploding
0
Stepper Motor H Bridge High Side N-Mos Burn Problem
0
voltage drop over IRF9540 = IRFZ440N H-Bridge
0
H-bridge driver circuit where voltage is higher than control ic
1
Can I drive a high-side N-channel MOSFET with NPN transistor and extra battery? (H-bridge)
2
H-Bridge Gates Stuck On
0
H Bridge not working on HV