A few questions on PIRs and other motion detectors

I grew up incorrectly believing that motion detectors (as part of burglar alarm systems) were designed to detect movement, when in actual fact it is the movement of a heated (like body heat) object which causes them to trip. I also understand there are some which are so sensitive they can even detect the body heat from fingers typing on a keyboard!

Question #1: Are there motion detectors which just detect motion, without the moving object having to radiate heat?

I ask this question because the above sensors can be blinded by a small glass picture frame placed over them, with a long pole. It would be much more difficult to bypass if they detected movement.

I assume we should exclude sonar sensors since they are easily bypassed with a thin layer of fabric, such as wearing a bed sheet like a ghost, according to Myth Busters.

Question #2: Aside from microwave motion detectors potentially being problematic when they can detect movement through solid objects such as wooden walls, furniture, and glass which could lead to false alarms - why are they not used more frequently?

Question #3: Why do some PIRs in alarm systems have three LED lights yellow | red | green under the plastic sensor? I ask as perhaps they detect three different types of movement, so this might be related to the question and not off-topic.

PIR sensors have quite a few advantages:

I’d be curious to see a PIR sensor that can actually detect fingers moving on a keyboard at any decent distance (1 or 2 meters), though. Given how a PIR detector works this seems highly unlikely.

Some of the cons:

There are many, many other ways of detecting presence or motion, though, like PIR sensors, each has its own pros and cons, and many may not be suitable depending on what exactly you want to detect.

There are probably many more, and depending on you exact use case, some or many may or may not be applicable.

VHF or UHF signals in a quiet channel using a splitter on one of the 2 ports can measure reflected signals off walls and detect reflections up to 10 or more wavelengths by using a Schottky diode and amp to detect changes in level using a constant power amp of ~100mW or so. This is the same as using RSSI on a Return Loss bridge.

I found by accident this worked to 10 yds in a lab when tuning a dipole back in the 70’s and later found commercial solutions doing the same. The idea is to differentiate changes in mV in the reflected “standing wave” off walls and anyone disturbing those paths changes the amplitude up or down so an AC full wave rectifier with a slow high pass filter and a comparator is all that’s needed.

IR motion sensors are extremely accurate using pulsed IR to get an AGC average reflection back with a PD and signal conditioner. Then any small change relative to the AGC’s signal, triggers the light on. They are found in big box stores for outdoor lights and are very cheap to turn on floodlights. Just hack the sensor to an Optocoupler for an alarm signal. Then add in battery backup if your grid is unreliable.

I assume we should exclude sonar sensors since they are easily bypassed with a thin layer of fabric, such as wearing a bed sheet like a ghost, according to Myth Busters.

As opposed to a thin emergency blanket for PIR sensors?

No other answers yet address #3 - the three LEDs. What you are probably looking at is a dual technology motion detector, not a PIR. These contain a PIR, which only when triggered (to save energy) activates a second technology to detect motion (often microwave) for a few seconds. The PIR activates the first LED, and the microwave the second LED. When they both triggered simultaneously for a period of time, the third LED is activated, and the signal tripped.

However, this is trying to do a different thing from the use case you are concerned about. You are concerned someone might block the PIR's usage - this would still work (as then the microwave motion sensor would never be triggered). The reason for this arrangement is to reduce false alarms.

Note also that most home intruders are not sophisticated opponents who are well versed in defeating home security systems. They're often poorly educated desperate sorts, looking to fund their next hit. The main two effects of an intruder alarm are first to encourage them to pick an easier target (e.g. next door), and secondly to make them exit as quick as possible when the loud noise goes off. There are far easier and more reliable well known ways (which I won't post here) of making sure a cheap intruder alarm does not alert anyone than sneaking past the PIRs wearing something. If your adversary is well versed in defeating traditional home security systems, you will need a far better security system (as e.g. banks, high end jewellery shops use).

Motion sensing can be done with cameras. OpenV and other technologies can detect motion from image section analysis over time instead of heat changes over sensor sections. This is unlikely to be defeated with a simple mirror unless very very slowly moved into place.

@jcaron's answer mentions Ultrasonic motion detectors and I'll expand on this. They are easy and can be cheap but can see around corners and outside the room; they are not limited to line-of-sight like the PIRs, which can be both good and bad.

An ultrasonic transducer emits an ultrasonic wave (sound at a frequency higher than a human ear can hear) and receives reflections from nearby objects. Exactly as in Doppler radar, heterodyne detection of the received field indicates motion. The detected doppler shift is also at low audio frequencies (for walking speeds) since the ultrasonic wavelength of around a centimeter is similar to the wavelengths used in microwave motion detectors. One potential drawback of ultrasonic sensors is that the sensor can be sensitive to motion in areas where coverage is undesired, for instance, due to reflections of sound waves around corners. Such extended coverage may be desirable for lighting control, where the goal is the detection of any occupancy in an area. But for opening an automatic door, for example, a sensor selective to traffic in the path toward the door is superior. 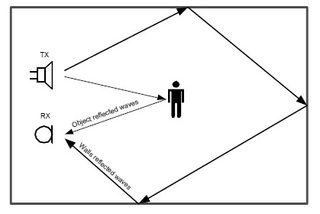 Not the answer you're looking for? Browse other questions tagged microwave motion detector security pir or ask your own question.

0
Most energy efficient and very small volume way to produce motion
0
How to use pir motion sensor to light up 3.8v dc bulb using battery and relay
3
Motion sensor to detect birds and small animals but ignore humans
0
PIR sensor detects motion only when a very near motion to the IR sensor and when the cover opened