How to improve buck converter's efficiency

My first question - is this even possible? I've seen a 650 - 40V converter on mouser, but that is the best that I found. Is the limitation for output is PWM duty cycle? Because it would have to be almost 0%, to get low output?

but it has very low (<10%) efficiency. Is it because switching ratio? I increased duty cycle, to get 50V and efficiency reached 26%. The bigger output, the better efficiency, but I still need 10V output. I've read that I need to replace diode with another mosfet, but it just made things worse. Changing LC values and DC or PWM frequency barely changes outcome.

I am green at this - I only designed and built a small boost converter so far. I do not have serious plans to make this (so dont worry about high voltage), I'm just trying to understand how this works.

The main efficiency hog in a switched converter of any type is the switching time of the switch.

Here, you have 10kHz and 1/60 duty cycle, or about 1.6us "on" time. A quick browse of the datasheet gets a total of ~0.6 us switching time in the normal use case of this transistor. Not good.

Be also aware that the diode has switching time, too. You probably did simulate the circuit with an ideal diode, but real diodes will make you even less happy.

You can increase the overall efficiency by lowering the frequency and using an impractically big inductor - and it will emit an audible sound as well (bad in itself no matter if you are there to listen to it).

On the other hand, if you use an 60:1 transformer, you will get near 50% duty cycle and a possibility to use way smaller transistor with better switching properties (capacitances, etc...) at lower current to switch in the first place. You could then use a Shottky diode at the output as well, losing only 5-7% of the efficiency in it. Synchronous rectification is also an option, getting even these 5-7% back.

As an added bonus, you will get the transistor at the lower side with its emitter/source at ground and the whole gate controlling circuit at some reasonable voltage, leaving at these 600V only the drain/collector of the transistor and the transformer primary. Since you are not separating the input from the output, you may power your control circuit from the output as well.

p.s. bipolar transistors are so 1990s for switching power supplies, but since you are only practicing, you can use them as well. A reasonable SMPS circuit in 2021 will probably feature a GaN FET transistor.

Theoretically it should be possible to achieve high efficiency with the right parts. I reproduced your design in LTspice using 'real' components. The calculated efficiency was 81.2%. Here's the circuit:-

I chose an STP11NM80 simply because it was the highest voltage NMOSFET in LTspice's database. However this FET has much lower RDSON and total Gate charge than the IRFPG50. The importance of this becomes apparent when you look at the Drain current waveform:- 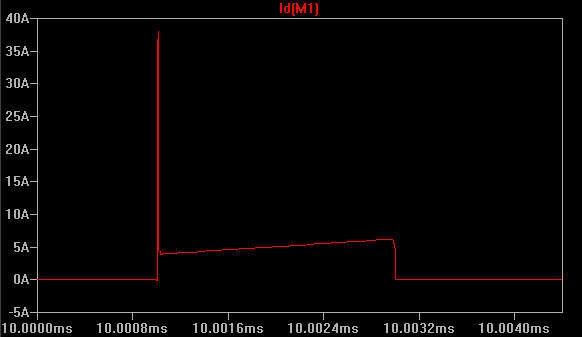 More concerning is the huge current spike you see at switch-on, mostly caused by the flyback diode's reverse recovery as the voltage across it goes from ~+1.5 V to -600 V. The 38 A peak is just within the STP11NM80's peak current rating, but well over the 25 A rating of the IRFPG50.

The individual component power losses in my simulation were:-

So in this case we see that the diode is the major loss contributor, followed by the inductor and then the FET. With different component choices the rankings could change and total loss could be higher or lower.

So much for the simulation. In the real world you have more problems. You need to control the FET somehow, which requires another power supply just for the controller - which has to boost the Gate voltage above 600 V to drive the NMOSFET. If for any reason voltage regulation fails the output could rise to 600 V with no current limit.

In a practical circuit the FET's switching speed will be limited by the driver, and perhaps also to reduce EMI. This will increase FET power loss during switching when it has both high voltage across it and high current going though it.

These problems can be solved solved by using a transformer, which improves efficiency by running at a higher duty cycle, can have an auxiliary low voltage winding to power the controller, and provides galvanic isolation. You might prefer an inductor to save space, but a 500 mH inductor rated for 2 A is not small either.

Not the answer you're looking for? Browse other questions tagged mosfet buck buck-boost or ask your own question.