LP324N op-amp amplification - why does one circuit work over another?

I have been trying to use an op-amp (LP324N) to amplify a LED that I am using as a photo sensor. The datasheet suggests that a single voltage supply is sufficient, but when Circuit 1 below is used I don't seem to be getting any output reading that changes with light exposure.

If instead I connect the resistance to the inverting input of the LM324N (cf. Circuit 2), and disconnect the non-inverting input that was previously grounded (so its floating now), I start being able to get output readings that vary with light exposure.

Can someone please help with: 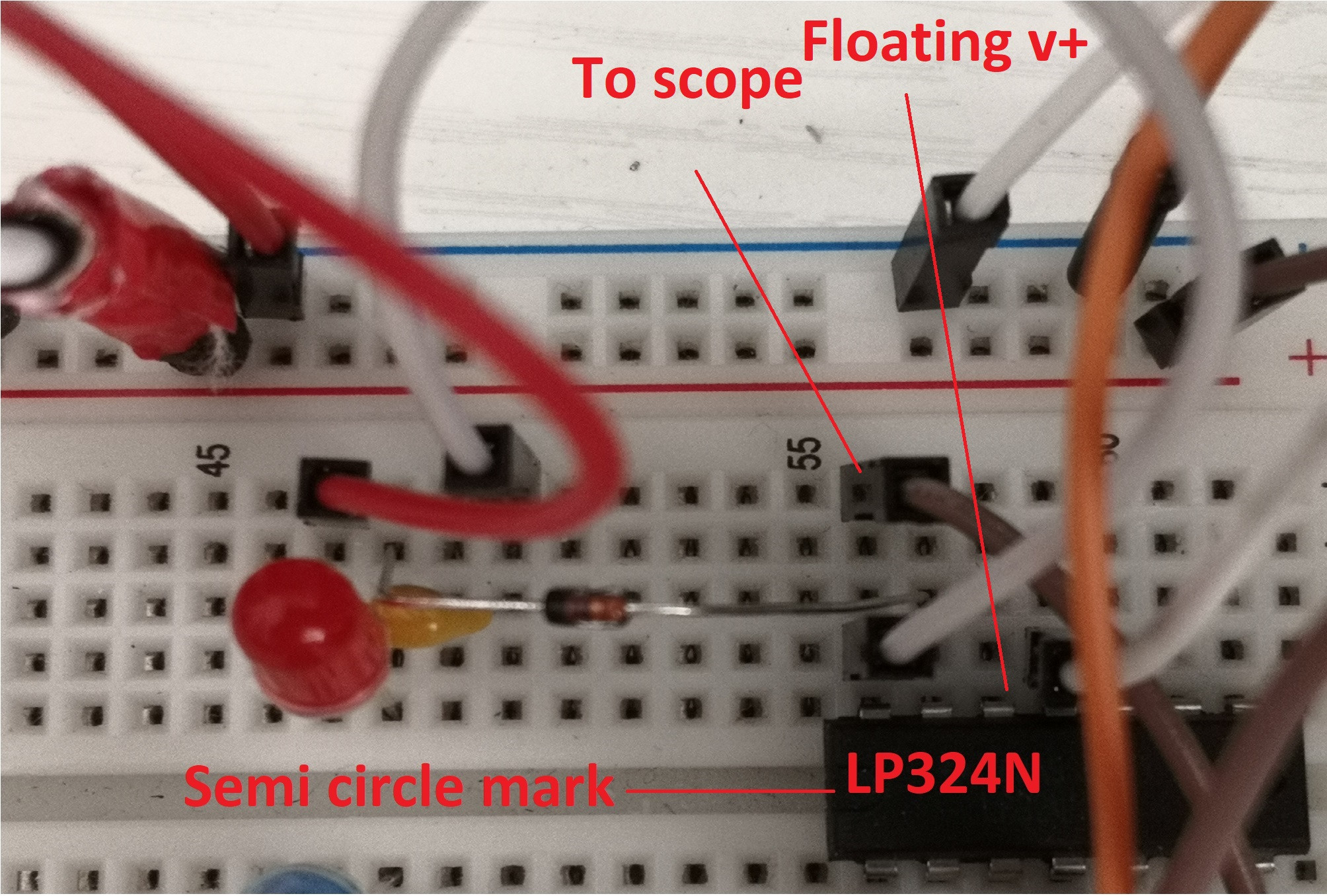 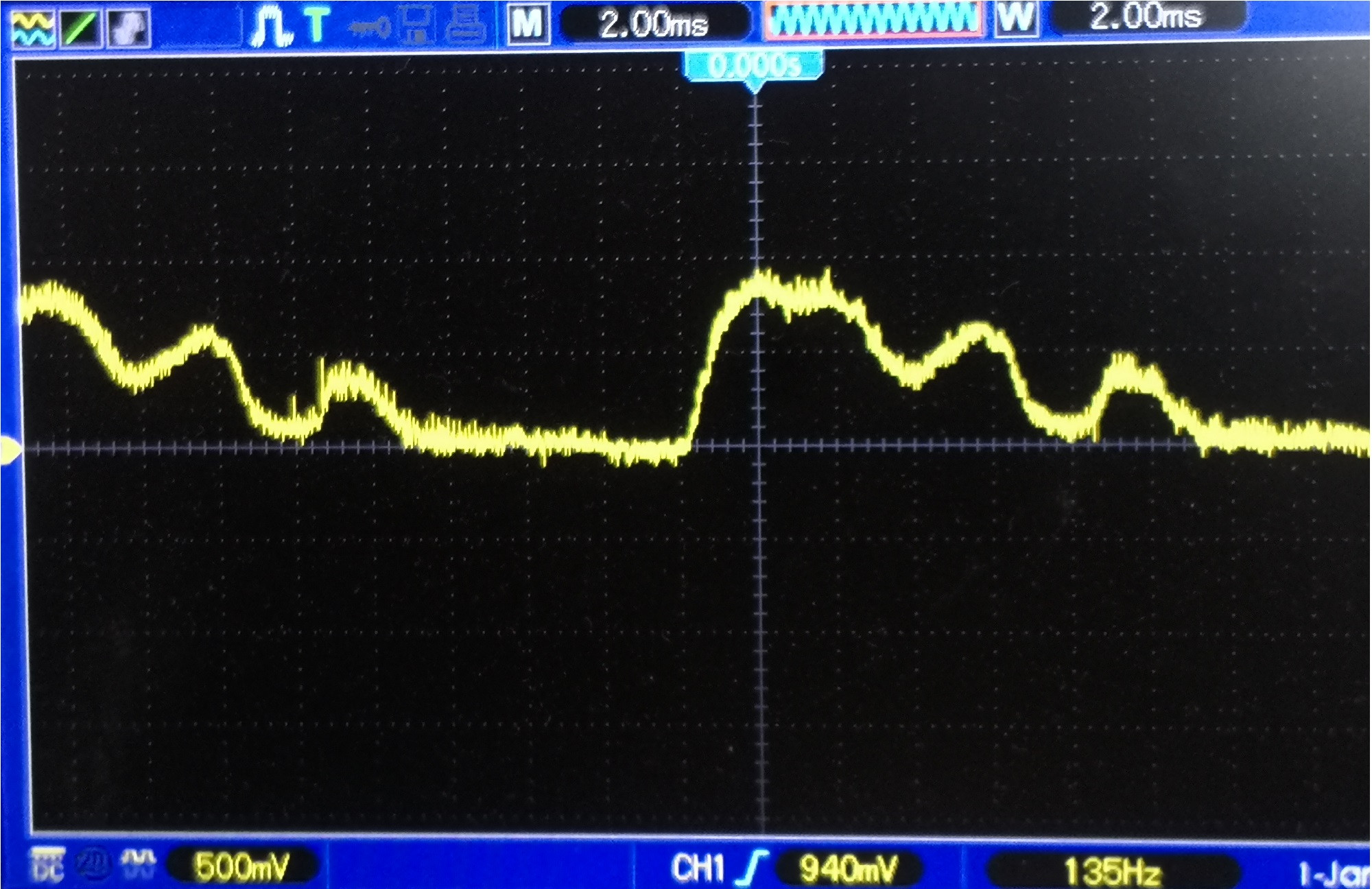 Let's take the second circuit first. What you are seeing is a pathological condition. Letting the +in float is asking for trouble, and you're getting it. Just as an exercise, try triggering the scope on the middle of the rising edge of your waveform. When you do this, you'll probably see the measured frequency change to 120 Hz. Whenever you see 120 Hz on a circuit which should be giving you DC, you know you're picking up AC hum, and I suggest that's what's happening. The floating input is varying at 120 Hz, which is 60 Hz rectified by internal diode junctions, and the output reflects that. Never, ever, ever let input pins float on an op amp. For that matter, I suggest you configure the 3 unused channels as followers and tie them to something convenient like 2.5 volts, which you make by using two resistors in series for +5 to ground.

Now, the first circuit. You're probably not aware of this, but LEDs are pretty bad photodiodes, and putting them in a colored body makes their response to "white" light even worse.

EDIT - Part of the reason that LEDs aren't great photodiodes is that their collecting area is very small. Dedicated photodiodes which are that small are usually intended to be used with high light levels, and can operate at higher frequencies. END EDIT

Also, running your op amps single-supply means that you can't measure what happens when a signal tries to go negative. I suspect that you've got issues with the offset voltage of your op amp, and your test illumination is insufficient to overcome it.

My first bit of advice is to get a second power supply, and drive your op amp with +/- 5 volts. If you're not willing to do that, try offsetting the input with a virtual ground. 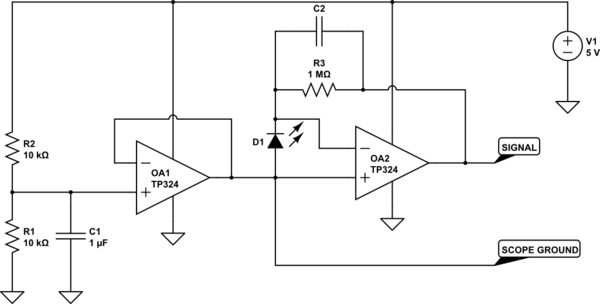 A word of warning - You must use an isolated 5V supply. If you don't, when you connect your scope clip to the virtual ground, you may well get sparks, melted wire insulation, and dead components. Some cheap power supplies from places like China do not have isolated grounds. Caveat emptor applies.

If you're stuck on this, you can get around it by using an AC light source. Illuminate the LED with another LED tied face-to-face with a few turns of electrical or masking tape (not scotch or magic tape, since they are transparent.) Drive the new LED with a circuit like this

This will give a square wave at about 30 Hz, and you can use your scope's AC coupling to get rid of the 2.5 v offset on the photodiode output.

324 inputs are weak current sources, if you don't connect them to anything they will rise to near the positive supply voltage

in circuit 2 both inputs float high but the inverting input is pulled down by the LED/photodiode resulting in a positive imbalance and thus a positive output signal.

3
How does this OP-AMP offset voltage measuring circuit work?
2
Voltage-controlled switch using op-amp
1
Why will my led not light up & why does my input voltage fluctuate when I add a wire?
1
Why Does Op-Amp Output Voltage Always Saturate (in a Non-Inverting Amplifier Circuit)?
0
Photodiode circuit Op Amp and amplification failure
11
Expected and actual unity gain bandwidth LM324N
3
Why does the input resistance of an inverting op-amp amplifier have to be high?
1
MCP6001 op-amp unable to drive LED when configured as inverting buffer?
1
Op-amp input voltage gets clipped off