I have a constant current LED driver which keeps the LEDs at about 5% glow when the AC side when the driver has its phase terminal connected to live power and its neutral terminal not connected to anything. 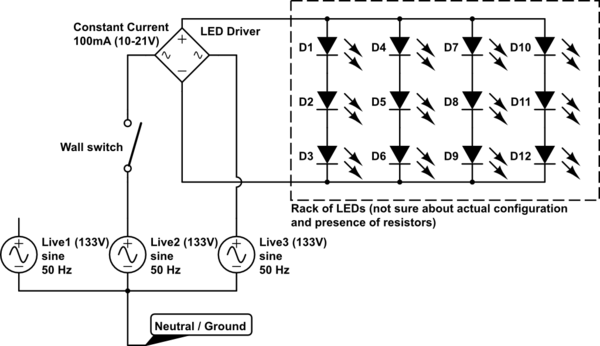 Whilst trying to figure out a way to absorb the leaking energy so that the LEDs do get to 0% instead of 5%, I noticed some weird behaviours on the DC side of the driver: 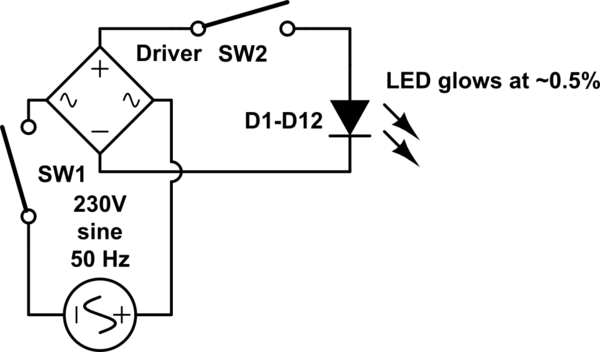 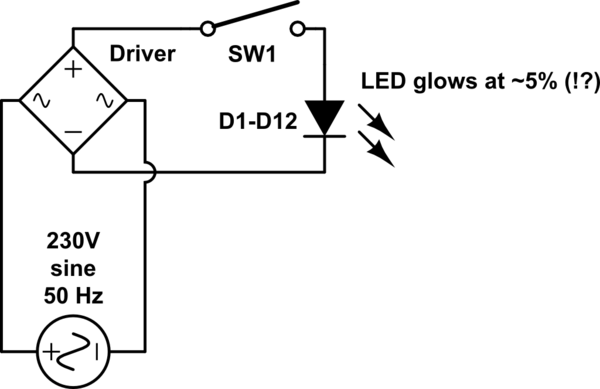 To sum up, after disconnecting one of the AC and one of the DC terminals of the driver, the LEDs are still getting some power in, even if very little. When I measured the voltage, it was around 3 volts, but I suspect this measurement was altered by the multimeter.

In my humble opinion, LEDs lighting up when one end of the circuit is disconnected from the source of power cannot be explained if we consider DC power.

Since the driver is a constant current supplier, I suppose the following is happening when a DC terminal is disconnected: "Infinite" resistance, which means the voltage gets very high, and might be sufficient for some current to travel through the diodes of the bridge rectifier, at counter current.

Is it possible that when this DC cable is disconnected, the voltage on the DC side of the bridge rectifier is so high that the diodes of this bridge cannot block the reverse voltage, and the DC terminals become AC terminals hence, propagating the capacitance effect from the AC side?

Have you checked how long the effect lasts for?

It's hard to say anything without a schematic and layout, but you may be inducing enough power on the other side of the open circuit to run the LED. LEDs can emit visible light with remarkably small currents, partially because our perception of light intensity is mostly logarithmic. I ask the above question because I've seen power bricks which continue to glow for several minutes after being unplugged, as they contain large amounts of capacitance.

If one of these mechanisms is what you're seeing, you may be able to fix it easily by placing a 1K-10K load resistor across the DC inputs to the current regulator. Again, a schematic would help us to be more specific and accurate.

Not the answer you're looking for? Browse other questions tagged diodes capacitance led-driver bridge-rectifier or ask your own question.

4
Understanding the characteristics of a LED driver