I've made a PCB which contains an Atmega32u4, and just finished soldering it up today. Now, I realised that I bought the wrong Atmega32u4 version - I bought the version which does not by default use its internal oscillator, but which does by default use the USB bootloader. So, I want to change the fuses of the microcontroller to instead use the internal oscillator, since I didn't include an external one on the PCB.

To do so, I downloaded MPLAB, and opened up the MPLAB IPE, then selected the device as "ATmega32U4", and the tool as "Snap" - it detected my SNAP programmer, as it tells me what its serial number is. I went into settings and set the interface to ISP, as this is the interface I included on my PCB (I'll show the schematic later in the post). Then, I went back to the Operate tab, and tried to verify the microcontroller with the Verify button. This returned the following message:

So it appears that the reason it's failing to verify is something to do with the communication between the computer and the SNAP programmer, rather than between the programmer and the PCB. Does this seem correct? I'm running the IPE on Linux, and have made sure to restart to allow any udev rules to work. 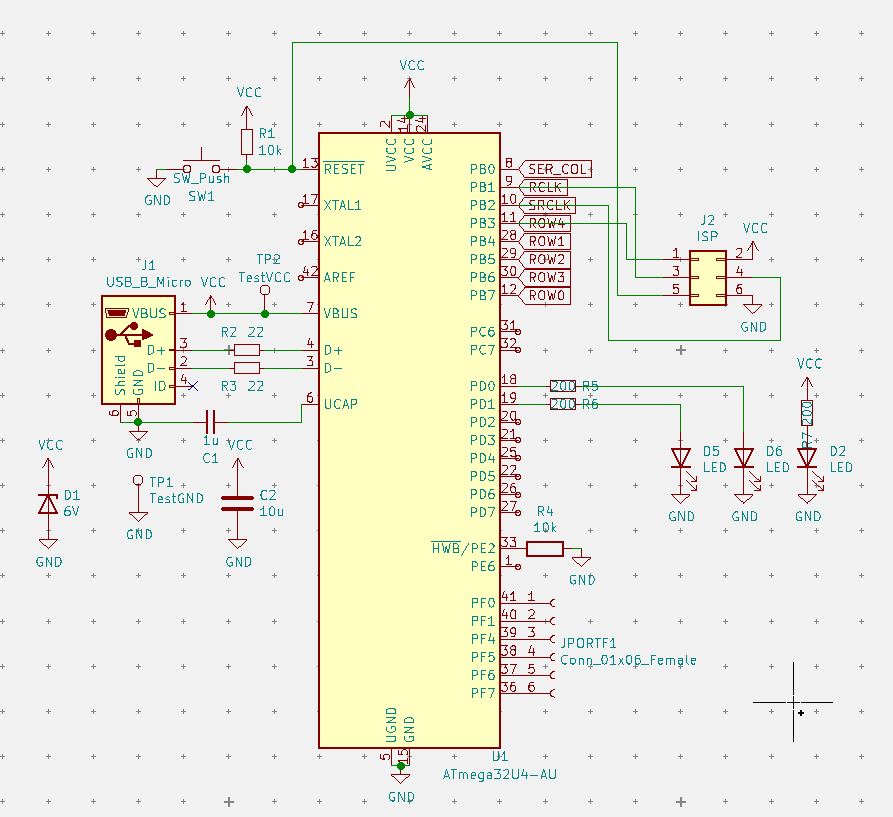 The ISP header is J2. Are there any issues with this schematic?

The way I've connected the ISP header, J2, to the SNAP programmer board is as follows:

I believe these connections are correct according to page 37 of the SNAP user guide.

Is there anything that could be going wrong here? I really hope I haven't made a mistake somewhere in the PCB!

The specific microcontroller I have on the board is the Atmega32u4-AU. The different models are described on page 422 of this document.

I've been thinking about this, and I think the question can boil down to should the Atmega32u4 be able to be programmed over the ISP header even if the MCU itself cannot run on its own clock. Is the ISP still able to program it and set its config bits to make it run on the internal clock?

See chapter 28.8 of the linked document: The device needs a clock. If yours is set up to use an external clock and you don't provide it, it cannot be programmed. Not even the configuration bits.

1
Programming ATMega16L over ISP interface
0
Customized PICKit can't write data in PIC12F629
2
Unable to program ATmega128 - 16AU using USBasp
1
ATTiny85 wont turn on, not sure how to debug
2
PIC18F1220 production build of C code not working
1
Programming an AVR microcontroller with multiple SPI channels
1
Minimal external components for AVR CPU
2
How can I program an Atmega32u4 over USB with this schematic?
1
Using Arduino Mega as Atmega2560 AVR development board with Atmel Studio 7
0
How do I resolve the following error "Verify failed. [ Pgm ] at 0x0, expected 0x00002805, got 0x00002807" in MPLAB X IDE