Why does a 2nd capacitor and coil smooth this signal?

I came, more or less accidentally, across this image here: 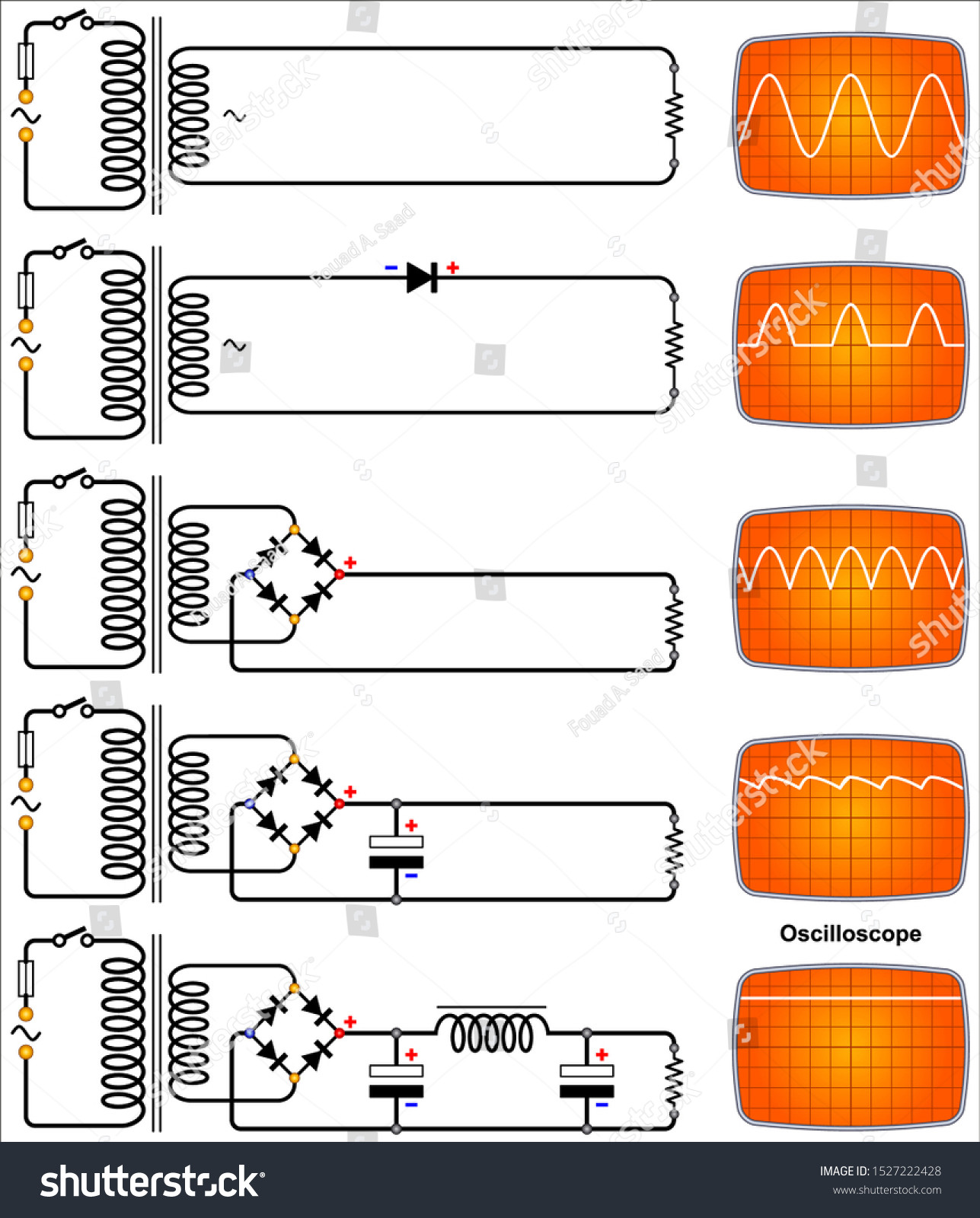 I understand all circuits and their resulting signal output, except for the last/lowest one. Shouldn't it look like this with one capacitor already? How has the coil to be understood physically/technically?

No, the waveforms should not look identical.

The added inductor and capacitor form an LC filter which filters out AC ripples and passes DC.

The last 2 circuits would only produce the same output (flat DC) if there is no load.

You can see from the 3rd circuit (bridge rectifier) that the capacitor only gets charged in 'pulses' - however, that load resistor is always drawing some current as long as there is at least some charge in the capacitor.
So if the capacitor is not getting charged (during a period of one of the 'dips') and the load is still drawing current, then the voltage on the capacitor must drop because it's being discharged.

This results in the rippled output you see in the 4th circuit.

In the 5th circuit, the energy stored in the inductor, combined with the 2nd capacitor, help to smooth out those ripples. The 2 capacitors and the inductor together form a 'pi' low-pass filter (named 'pi' just for the shape - no relationship to the mathematical value).

As others have stated, the capacitors and inductors are commonly used for filtering out ripples by smoothing the peaks and valleys. There are lots of websites that explain the math formulas related to using these as filters. But fundamentally it's important to understand what's actually happening. Both of these components store energy, but they do so in different ways. Capacitors store it as static electricity. Inductors store it as magnetic flux.

This causes them to behave differently, and rather oppositely, to changes in voltage and current.

Capacitors try to keep the voltage the same at the expense of collecting or releasing as many electrons as it can manage. In an analogy of water, one can think of a capacitor as a pipe with a flexible membrane sealing the middle of the pipe. The pressure on one side of the pipe may go higher and lower, as compared to the other side of the pipe, and in doing so the flexible membrane will stretch back and forth to compensate for the pressure changes. Does the move the water on either side? Sure it does. This will be the alternating current "moving through". But does the water simply "flow" through the pipe? Not really. It's moving back and forth, but it can't actually flow through because of the flexible barrier sealing the middle of the pipe.

Inductors try to keep the current the same as the expense of collecting or releasing as much magnetic flux as it can manage. In the same water analogy, one can think of an inductor as a very long pipe, or tube. Anyone that has carried a pale of water up a hill can tell you that water has mass, or "weight", and things that have mass can also have inertia. Water, having mass, moving through a long pipe will have inertia. Any water in the pipe will want to remain still if it is already still, and will want to remain moving if it is already moving. The speed of the water in the pipe can speed up or slow down, but the inertia wants to keep the flow rate steady.

Put these two pipe systems together in a design similar to the filter circuit above and it will tend to behave the same way. As the source pressure increases or decreases, as from the pulsing DC voltage coming from the rectifier bridge, the first flexible membrane will stretch to absorb the initial increase in pressure. At the same time the long pipe will resist an increase in quantity of water, but will gradually allow it to increase. The second flexible membrane pipe will also stretch to absorb the pressure changes between the long pipe and the load.

Generally speaking, adding more capacitors and inductors will result in better filtering, or less fluctuation. But like many things in life, there comes a point were more isn't better. At some point adding more components only increases cost, size, complexity, etc. There's also the continually nagging issue of working with imperfect components. An ideal capacitor or inductor will have exactly 0 ohms across it at any given voltage or current. But we make capacitors and inductors out of imperfect materials, so there is always going to be some amount of resistance added with these components. This resistance will cause some of the energy to be released as heat. Heat is wasteful and generally the enemy of any circuit, unless you are actually trying to build a heater. This tends to cause designer to add as many as needed and no more, or not much more.

As noted by @rackanboneman in a comment to @brhans' answer, this kind of power supply LC filtering was common in the vacuum tube era, since at mains frequency (50/60Hz) the inductor coil was huge, because the inductance needed required heavy iron cores. Since that equipment already had huge and heavy transformers, adding a kg or so of coil wasn't a big deal.

That technique was somewhat "lost" in the transistor and IC era, where the total power requirement of the devices went down, so the mains transformers became much lighter and an additional heavy inductor became too bulky and expensive in comparison. Moreover, it was cheap and much easier to add regulator ICs after the first filtering cap to quench the ripple.

More recently, the LC filtering approach has come back in SMPSs, because of the higher switching frequencies at which the final rectification is performed (e.g. flyback SMPSs). Or even in transformerless SMPSs (e.g. DC/DC converters), because the ripple signal has a much higher frequency.

At frequencies of hundreds of kHz or maybe some MHz the filtering coil can be made fairly small and inexpensive, using specialized ferrite materials. This can improve ripple rejection quite substantially in some SMPS designs.

For example, here is an excerpt from TI's LM2576 datasheet (emphasis in yellow is mine):

If you are only using line frequency, the inductors are at least 10x bigger size than the equivalent load power resistor. This is an old school way of attenuating 2x line frequency with a big power choke rather than a resistor in order to get 12Vdc from 12Vac rms. The inductor has a higher impedance that helps the bulk capacitor attenuate the 2x line frequency. 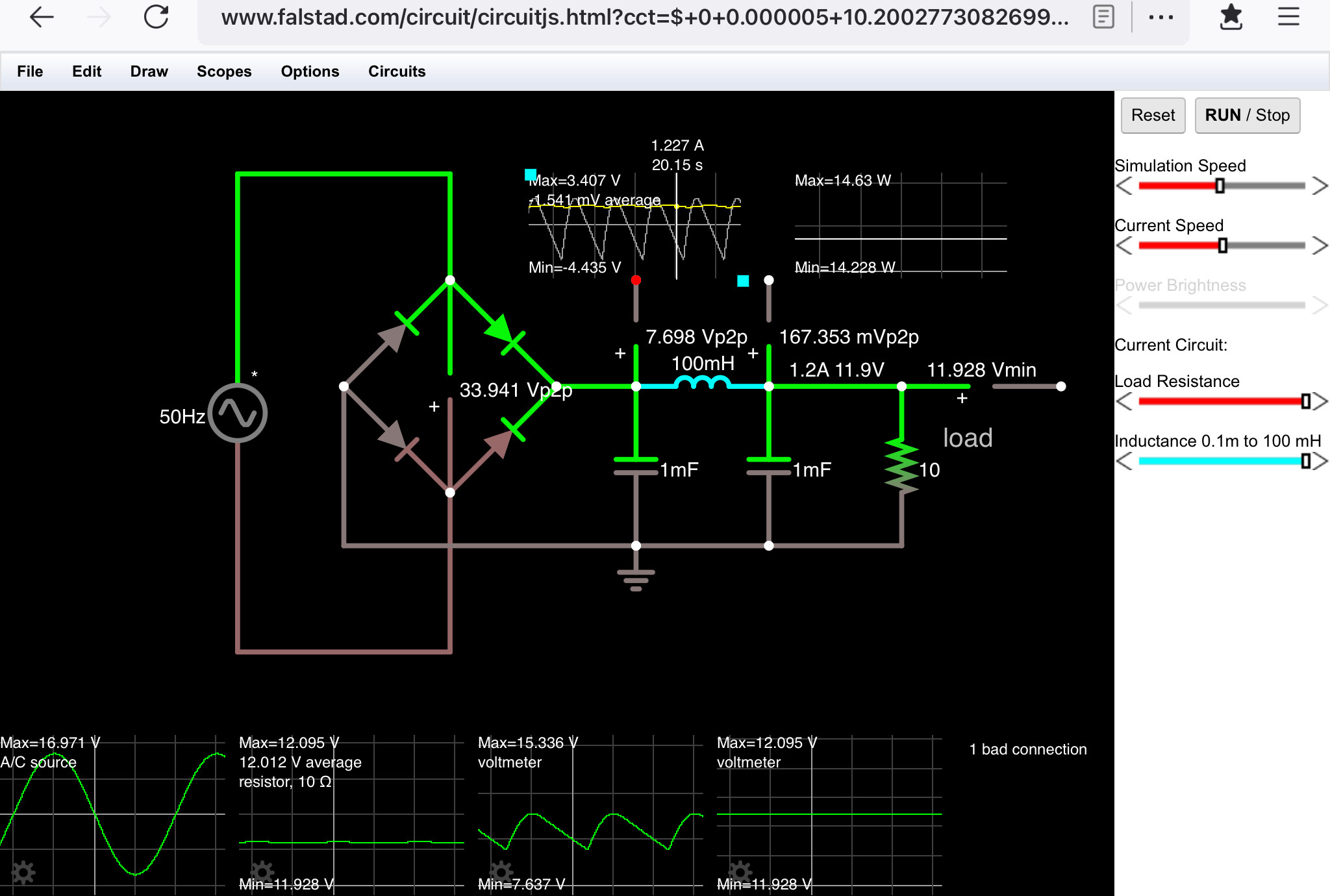 Have fun with the sliders for L and load, the. Compute L/R and RC for your required mVpp ripple! Or compute the impedance ratios for attenuation.

I have put in lots of probes to measure Vpp ripple, output power and voltage. The input is 12Vac rms.

This is why SMPS are so popular.

Not the answer you're looking for? Browse other questions tagged smoothing-capacitor or ask your own question.

0
How to calculate the gain of a RLC tank filter?