AVR Assembly on Arduino through USB?

Say I wanted to learn AVR ASM, and I had an arduino.

Now i know you can program assembly on the arduino, but is there a way to do it through USB. I assume i'd just write normal assembly and do it through avr-dude, but am I missing anything or do I need a serial programmer to do this successfully?

am I missing anything? or should this be as easy as i said above?

I believe i've heard around using "inline" assembly....but how different would this be from actually writing ASM directly to the AVR?

You can use AVRA (AVR Assembler) on Linux to develop your assembly language program on Linux. I'm on Linux and free both as in beer & freedom of use.

Plan to use AVRDUDE (also free - both above contexts) to burn in your object code. I have used it in Linux.

Plan to use another (cheap - free as in opensource) Arduino like as a programmer. I have used one here and documented. In my article, I download a bootloader to a new ATmegaxx, instead you can burn in your own program. I did it all through USB (as you asked).

You definitely can use an USB based Arduino or RBBB+USB cable to program your target Arduino using USB. RBBB is indeed a utility Arduino that I have used in that role.

Overall, to use my solution, you would have to use another programmer or another cheap Arduino like RBBB. I also have reviewed RBBB in my other post.

Another way to program your Arduino with another Arduino. 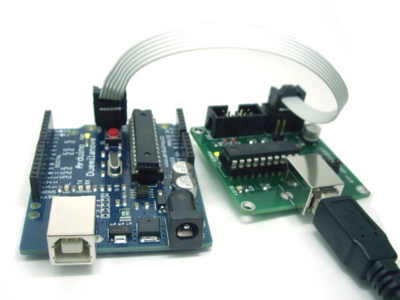 It is very simple. Use the Avr studio to write the code in assembly and compile it. Then feed the hex file to XLoader software to upload it to the arduino through USB like you do in Arduino IDE. No need for any extra burner/programmer.

Switching from C to assembly does not require any change in the method of loading the final binary object into the chip.

If you were able to load Arduino sketches into the board via the USB, then you are also able to load bare-metal C programs, and Assembly language programs.

All that you need is a toolchain which will produce appropriate binary images for use with avrdude.

For a bare-metal C program, you can do this using the copy of avr-gcc already installed by the Arduino IDE, and it might be worth reading the guides for doing so as a first step. Then you can alternatively give avr-gcc assembly langauge files (.s) instead of C source files.

EDIT: to clarify: "bare-metal" metal programs do not preclude retaining an Arduino-style bootloader, unless you set your toolchain address mappings to produce code which wants to overwrite the bootloader and use a programming tool (/tool options) willing to overwrite it. A few seconds after boot, the bootloader transfers control to your program, and remains entirely out of the way - just passive "data" claiming space at one end of flash - until the next reset.

I recommend in-line assembler in C. The gcc-avr you're already building sketches with lets you write assembler with placeholders for the register names. The C compiler then assigns the registers during its optimization pass. You get the convenience of C and the control, where you need it, of assembler. There are no new tools to install, and your Arduino USB development process doesn't change.

The problem is that without the Arduino BootLoader there is no direct support for the USB, to upload. Even the Arduino BootLoader needs to be initially uploaded. This is typically done using the ICSP connection. You can use various cheap ICSP programmers such as USBtinyISP which can be found very cheap. If you look hard enough.

Alternatively, you could just code the Assembly inline to the Arduino Sketches:

I found your question while trying to do the exact same thing: program an existing Arduino board in pure AVR assembly without having to use any additional hardware. I ended up figuring out how to do it on my own, so I want to share my answer which anyone should be able to re-use on Windows.

First, download Atmel Studio. I'm using version 6.1. This will let you compile the AVR assembly code you write into a .hex file which will be written to the microcontroller on the Arduino board. My Arduino board is an Arduino Uno which uses the ATmega328P chip, so select that when creating a new project in Atmel Studio.

If you're like me and trying to learn AVR Assembly, you will probably also want the 8-bit AVR Instruction Set guide which tells you what instructions you can use on the ATmega328P.

Here is the code I use to get a blinking LED on Arduino in pure assembly:

The Arduino IDE uses AVRdude to send the programs that you write in C to the Arduino board. You can see this by turning on verbose output in the Arduino IDE and watching what happens in the log. I found that using the same version of AVRdude that the Arduino IDE installs works well. Here is the command to upload your program to your Arduino:

You'll need to use a different command if AVRdude is installed in a different spot. You'll also need to find your copy of avrdude.conf and copy it (along with the .hex file from the Debug folder above) into the folder from which you'll run the above command. It's best to turn on the verbose output in the Arduino IDE and verify the correct command for yourself. (For instance, your Arduino might not be connected over COM5.)

You can read more about the options used by AVRdude on ladyada's AVR Tutorial. The instructions above won't work if you don't already have an Arduino working with the Arduino IDE- in other words, the Arduino bootloader must already be on your ATmega328 chip. This will not overwrite the bootloader, and you can easily switch from using this method of programming back to using the Arduino IDE with no headaches.

11
Arduino Bootloader Details
13
Arduino with assembly?
1
Write an AVR Program
8
Can a hobbyist ARM setup be as simple as this AVR one?
4
Programming a ATmega328P on a breadboard - programmer cannot connect
2
Arduino as AVR Programmer with Avrdude
0
AVR programming
0
Using Arduino Mega as Atmega2560 AVR development board with Atmel Studio 7
2
Getting started with AVR programming concepts