I would know the output power when the capacitor charged 1.5V. 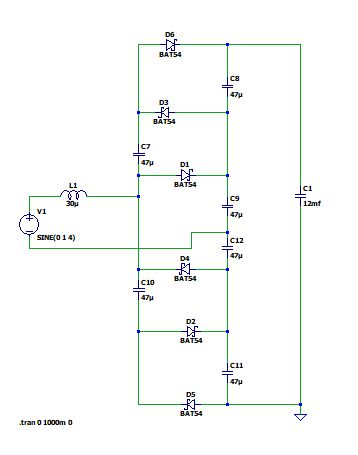 It's not going to be much.

That thing isn't (quite) a half wave Cockcroft-Walton multiplier, but it is first cousin to one.

It will take quite some time to charge that 12 millifarad capacitor.

The low input voltage means that you won't be getting very much voltage at the output. As a sextupler, you would expect it to put out about 6V from a 1V input, but then you have to subtract one diode forward voltage from the output - for each stage. You lose something like 2 or 3 volts in this setup. You might get 3 or 4 volts out of it.

A short circuit of the fully charged C1 would deliver considerable power but only for a short time. Other than that, you are looking at about three volts through about 8.5k. Call it maybe 0.3 milliamperes continuous.

L1 is pretty much useless. It is as good as a short circuit at 4Hz.

I want to calculate it theoretically

That's not going to be possible, for most humans: To begin with, even with a Schottky diode like your BAT54, 1 V barely even brings your diode into saturation. In other words, the simplification "diode is either off for V < 0 , or perfectly on for V>0" simply is not good enough. modern BAT54 datasheet.

This is the stuff the simulation program you've already designed this circuit in was made for. So simulate.

Not the answer you're looking for? Browse other questions tagged power diodes passive or ask your own question.