I'm new to antenna matching and would like to understand the effect of length on the return/insersion loss on an semi-rigid SMA connector.

This is the datasheet of the connector I am using.

This conencter has a length of 50mm. Is decreasing the length (cutting) to accomodate this in a smaller device recommended?

What are the things I've to watch out for by doing this?

Correct,the connector is 12.7mm, the data sheet says 50ohm, and does cutting the pigtail at the marked region (shown in red) change return loss or phase? 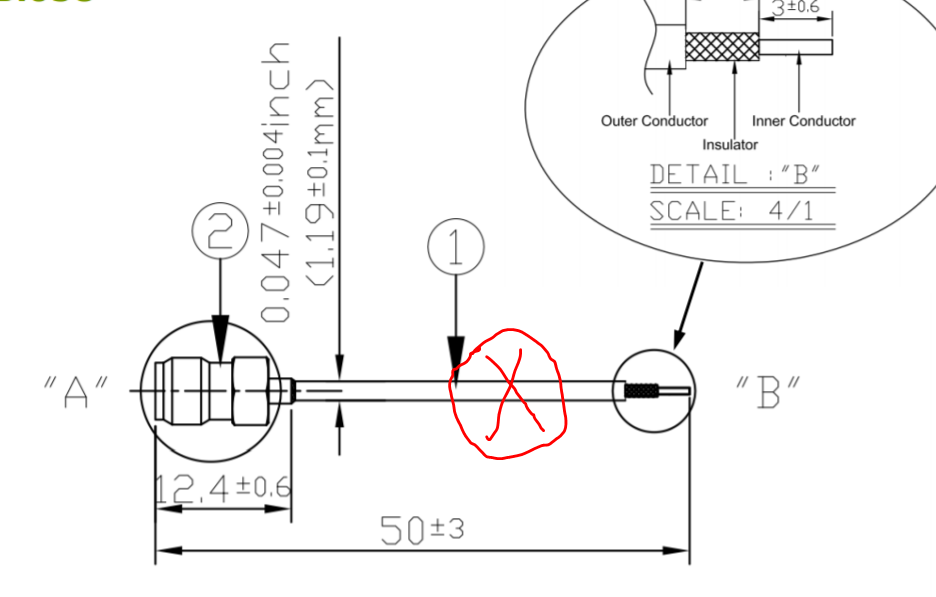 would like to understand the effect of length on the return/insersion loss on an simi rigid SMA connector.

The length of a piece of 50 Ω line has no effect on its return loss in a 50 Ω system. It has only the obvious first order effect on insertion loss, that a longer line has more loss than a short one.

If you are matching an antenna to another device, then one or both will be other than 50 Ω, and you'll need something other than 50 Ω line to perform the match. If either the device or the antenna are 50 Ω or close to it, then the length of line behind the connector is largely irrelevant.

There's a knack to cutting semi-rigid cable. Carefully score the outer jacket with a craft knife. Do this by rolling the cable on the edge of a desk under the knife. Then bend it back and forth at the score line until the jacket cracks at the line. Pull off the outer jacket, then strip the insulation with cutters, or with the same knife method. Take care not to nick the inner, that will make it very fragile to breaking with a little extra bending.

Nothing specially would happen if you cut it. Shorter the coax is, lower the loss. However there is a certain trick to have a transmission line in multiples of half wavelength Citation:

For the special case where \${\displaystyle \beta \,\ell =n\,\pi }\$ where \$n\$ is an integer (meaning that the length of the line is a multiple of half a wavelength), the expression reduces to the load impedance so that

In practice, that means that even if the coax has not the same characteristics impedance as the impedance of antenna and transceiver, there will be no reflection / mismatch. Some people doing modifications on RC control transmitters praise themselves to have found an ideal length of the cable so that the range of RC transmitter is increased. But this can be done just by trial and error.

To conclude, you can cut wherever you want, but there is always a slight different performance with different lengths.

5
What type of antenna does the Xbox One controller use and how can you disable it?
1
Antenna efficiency and PCB impact
3
Cable length vs obstructions
0
Impedence Matching of Antenna and Coaxial Cable
1
GPS performance issues with PCB layout with patch antenna
1
How to match RF output of (30+j10) Ohms to 50 Ohm antenna with matching network?
0
BLE chip antenna matching
1
Match SMA antenna input connector to 50ohm