Can any two elements in the circuit be labelled as series or parallel? If not, how can I find voltages and currents?

Ask Question
Asked 1 month ago
Active 1 month ago
Viewed 24 times
0
\$\begingroup\$
This question was migrated from Physics Stack Exchange because it can be answered on Electrical Engineering Stack Exchange. Migrated last month.

This is a voltage amplifier circuit I want to build and curious about the series parallel connections so to understand the working of each element. My understanding of the circuit is:

How can 56k ohm and 5.6k ohm resistors be classified? Are they in series or parallel or anything else? I want to know so I can find voltage/current at the base of the diode. 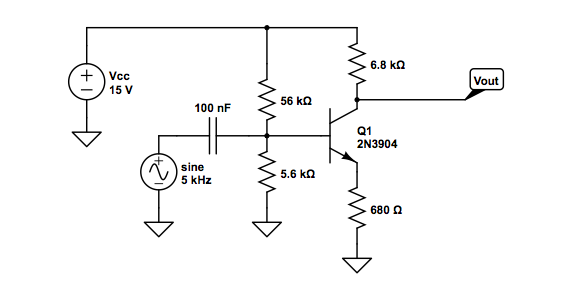 6.8k ohm resistor and 680 ohm are in series with the the diode (at collector and emitter respectively).

10nF capacitor is in series with the curcuit to its right.

Yes, but why not say that current entering the node is the sum of the currents leaving the node?

How can 56k ohm and 5.6k ohm resistors be classified?

For dc bias conditions classified as series with, as before, the proviso that the dc base current is very much smaller than the dc current through the two resistors.
For AC, given that the \$V_{\rm cc}\$ rail is effectively grounded the two resistors are in parallel.

Not the answer you're looking for? Browse other questions tagged untagged or ask your own question.