Why is this 3-way speaker wired this way?

I found a service manual of a pair of 3-way speakers that were part of a mini integrated stereo system. These are Sony SS-H77 speakers, which have served me very well back in the day. 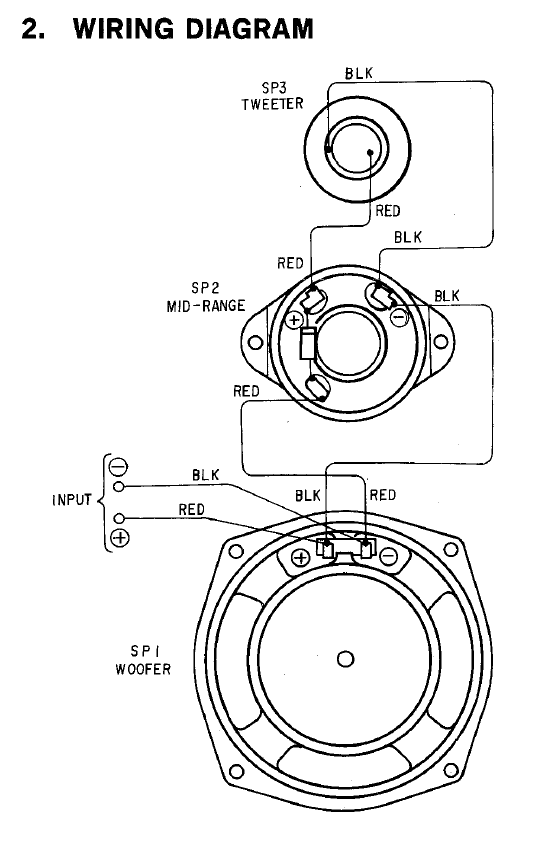 As I recall from some professional audio gear manual (made in 1980s) that I had to mess with, miswiring +/- at the speakers is the common reason for big "trenches" in the spectrum that are not correctable by the equalizer.

The reason is, the speakers' ranges overlap somewhat and in the overlapping band they may pretty much fight each other.

The switched polarity may be intentional, because of some speaker's undesired spectral "feature".

On the other hand, it may as well be a honest error in the diagram, because the stereo effect works exactly in the range where most woofers and mid-ranges overlap. Switching the polarity between low and mid will kill the stereo effect it in the overlapping range. I would think at least twice before using such a "hack".

Feeding a speaker a frequency it is not designed for is a waste of power, a source of non-linear distortion and good reason for overheating. Neither is a good thing.

The own inductance of the woofer generally does almost the right thing for the woofer itself. In more advanced speaker systems woofers are fed with inductors in series.

The min-range speaker filters unwanted higher frequencies also by its own inductance.

The high-range speaker is a capacitor itself (it is a piezo speaker). It does its own filtering as well.

p.s. back in 80's and 90's, I have seen quite a few speaker systems miswired from the factory - up to and including non-connected speakers. It looks like the market tolerated these things.

Tweeters can be damaged by low frequency signals, so a bypass capacitor is often used in series to act as a high-pass filter.

Speaker drivers are really nothing more than an inductor placed next to a fixed/permanent magnet, so they don't have polarity in the same way a diode might. Given a signal, the magnetic field causes the driver to physically move. In one polarity, the diaphragm moves away from the fixed magnet while in the opposite polarity it moves toward it.

Ideally when you have more than one driver, you want them to move in the same direction at the same time, which avoids phasing problems or perceived loudness dropoff. However your speaker cabinet may have ports (tubes or other hollow spaces for air to travel), and sometimes drivers are wired in reverse because the movement of air is effectively reversed by a port, depending on the design.

Without knowing more about the cabinet design, these general ideas are all I can offer.

It depends on the direction the speaker moves in

Not the answer you're looking for? Browse other questions tagged wiring speakers polarity reverse-polarity stereo or ask your own question.

1
Confused about the way this speaker is wired
0
Multimeter showing negative voltage on servo connection
0
Ceiling speaker has 3 wires
2
Combining speaker outputs to one secondary amplifier
8
Parallel speakers sound bad, but serials are fine
3
Speaker crossover wiring
1
Wiring a multi-speed motor from a tower fan
1
How to check the power output of home amplifier speaker terminals?