Why is only one channel of my dual H-bridge motor driver design failing?

I have a dual motor driver board I designed for driving 2 linear actuators with 48V and each one has as rated full load current of 3.5 amps. I can expect up to 10 amp short duration on startup, but they are heavily geared worm drive actuators and can lift many hundreds of kilograms.

The issue: My issue is that one channel seems fine and is able to power up, be idle, drive the motor as intended on ONE out of two nearly identical channels (in fact can drive TWO motors on the one output just fine) but one channel in particular is blowing up very quickly on all the boards we have tried. 4 boards out of 12 tested so far have shown the failure mode.

General details I designed the board with a H-bridge driver IC and external high voltage, high current MOSFETS so they should have been able to comfortably handle the load.

The linear actuators are used intermittently. They are basically forklift up/down arm motors and are expected to be used for a few seconds to lift or lower a load and then the user drives around a bit before needing to use them again.

The system is powered by a 48V nominal LiFE-PO battery, with charged voltage sitting around 56V, and near end of charge around 40V.

NOTE: Sorry for the confusion here, but my silkscreen has M1 and M2 incorrectly labelled (swapped around) and is planned to be fixed on the revision of this board, so the "M1" on silkscreen and how it was referred to originally in this question is actually the M2A and M2B signals shown in the schematics, half of the confusion came from U1 and U2 and the signal labelling in my schematic versus what I intended for the connectors themselves in the application. I didn't realize my mistake until after the boards were made. The ACTUAL issue is from the H-bridge formed by Q3,4 Q7,8 and U1, whose output signals go to connector J4 which on the schematic show M2A and M2B but on the silkscreen on the board show as M1A and M1B. 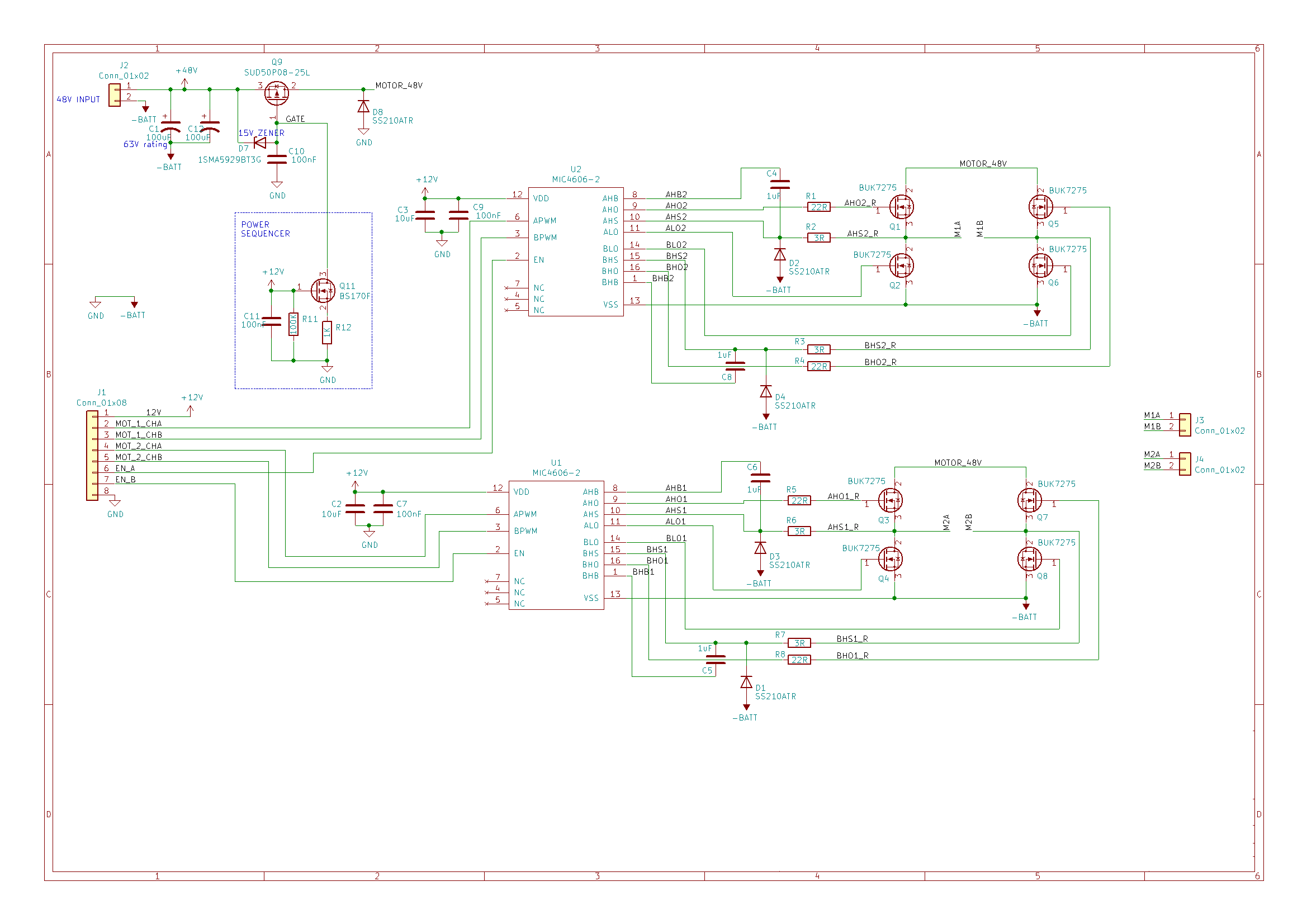 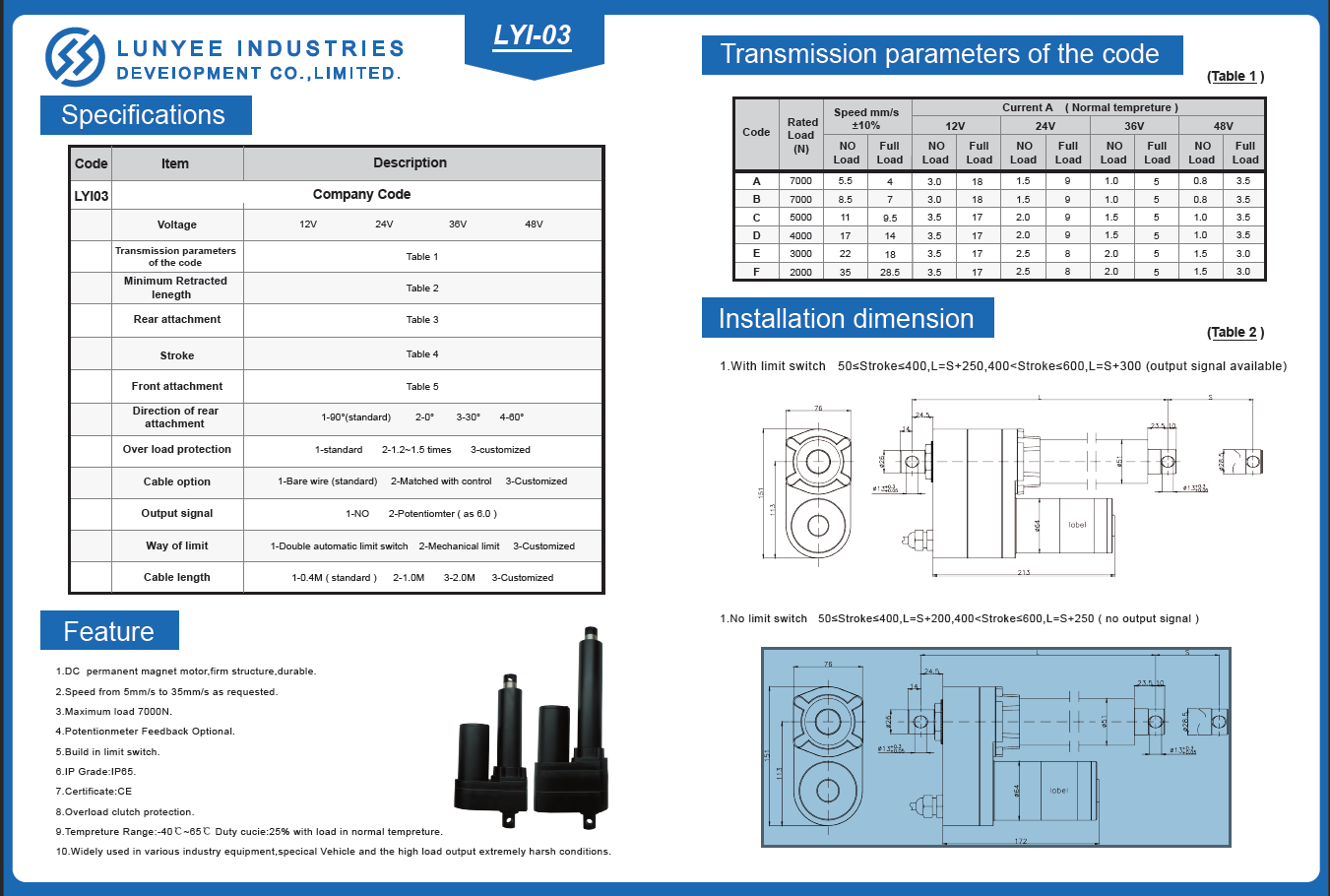 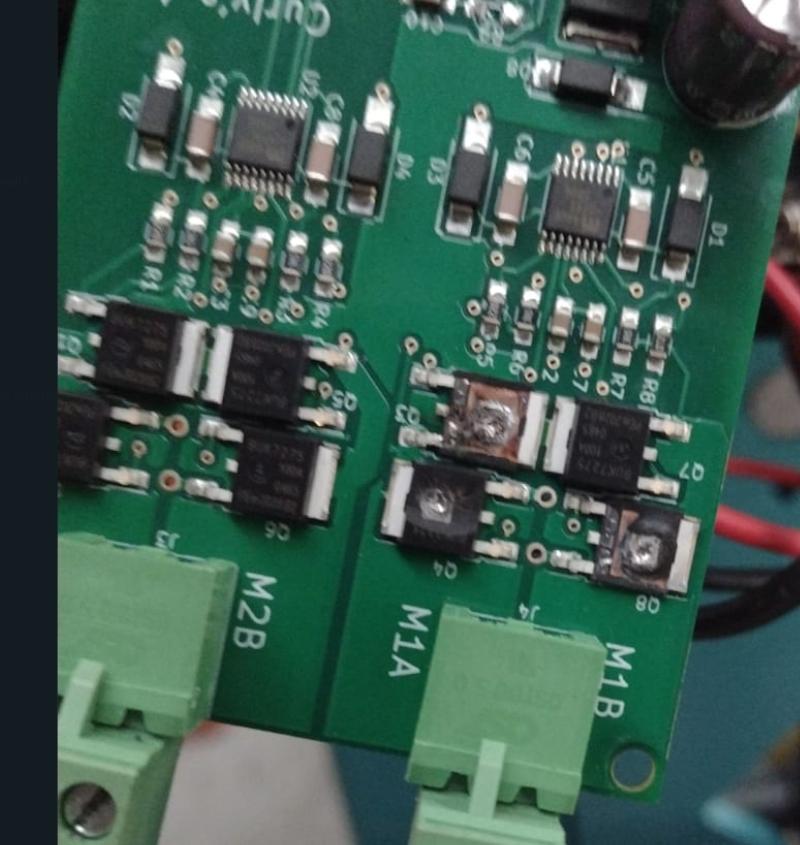 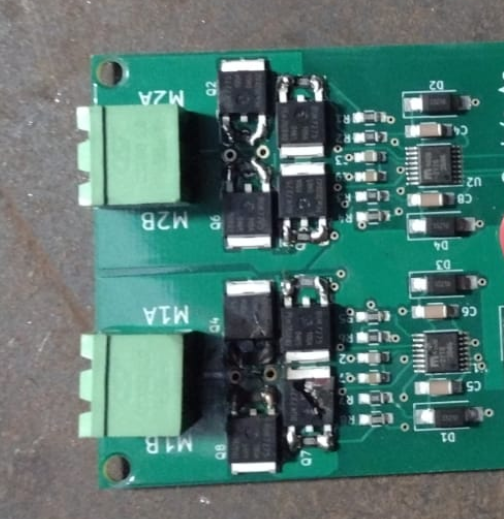 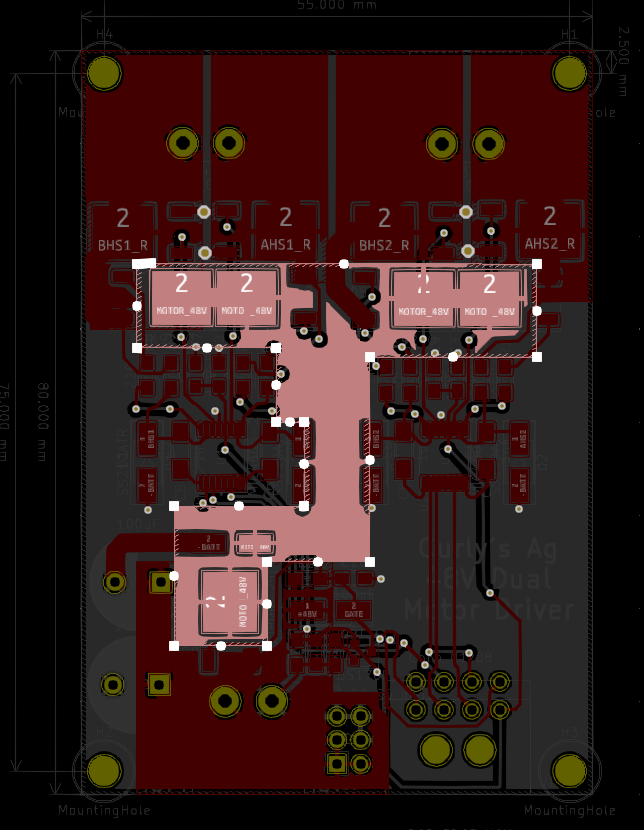 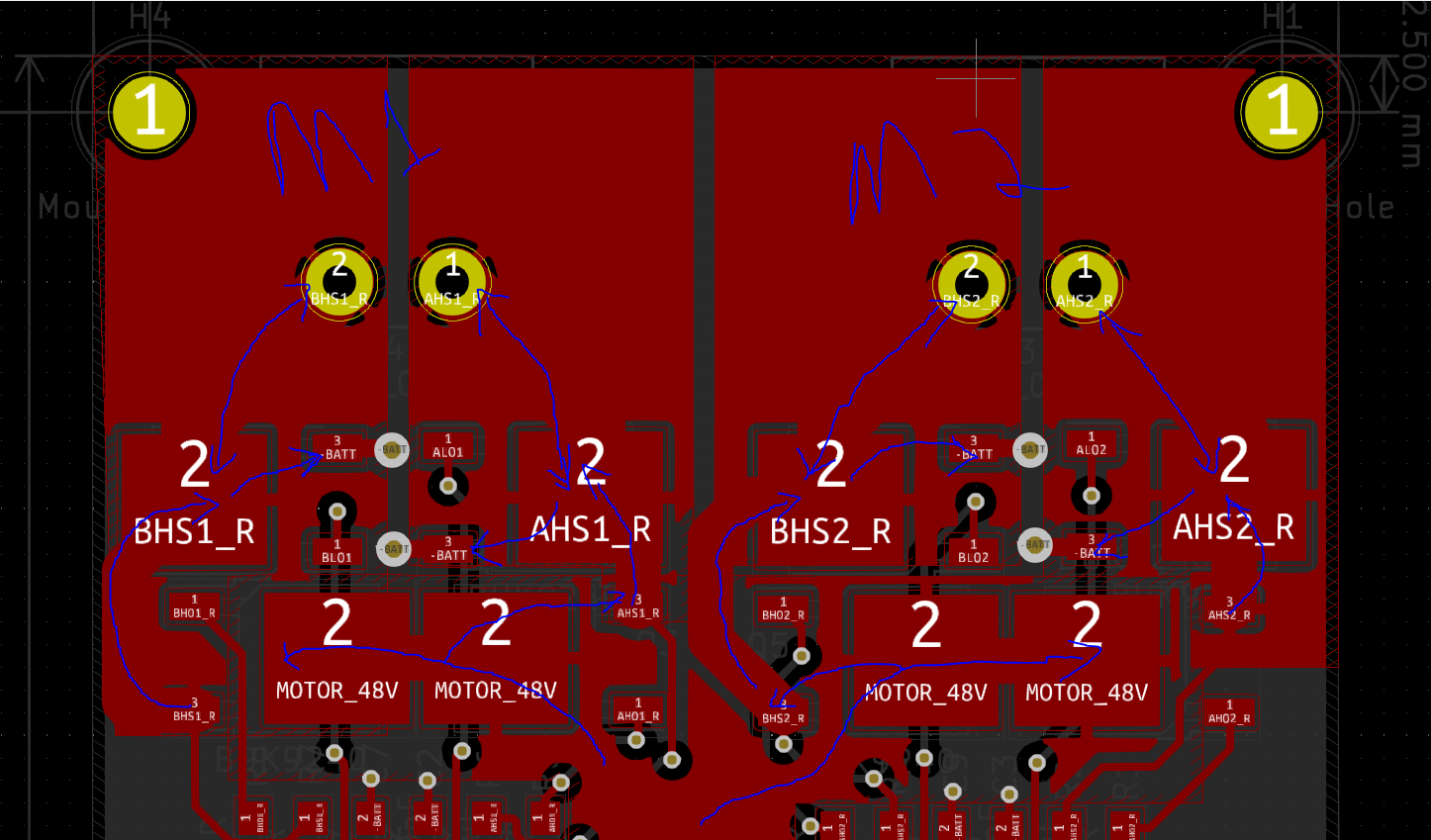 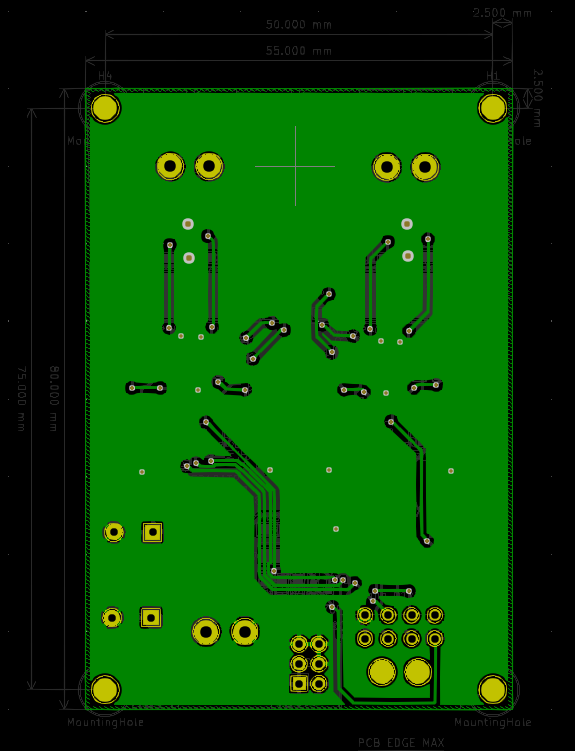 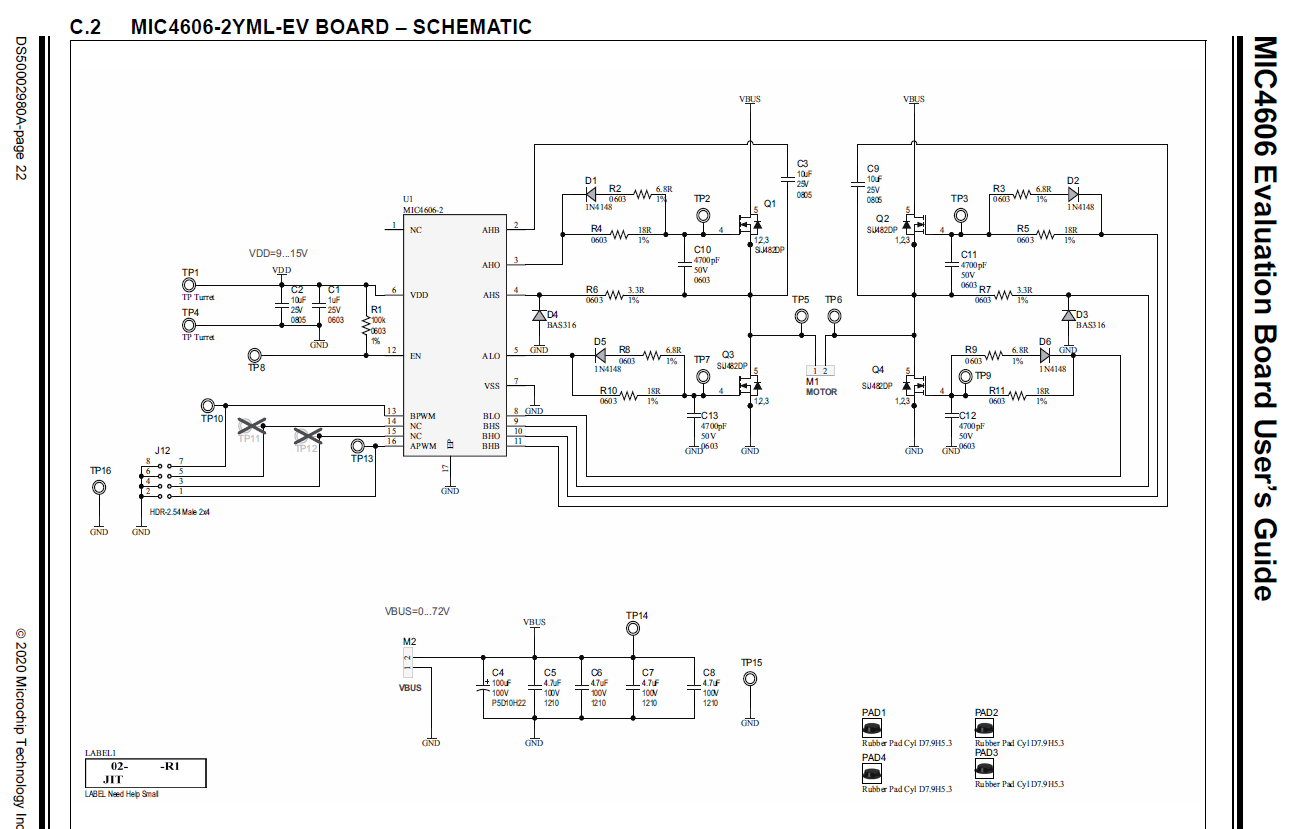 Failure Modes: 4-5 boards have failed so far, all in M1 channel.

In most situations the M1 channel doesn't fail until the load (motor) is driven by input signals from my control board, which even if they were 100% duty signals should still drive the H-bridge safely and correctly and the motors even have built-in limit switches to shut off when they reach end of travel.

At least 2 have been from power-up and not even actually trying to run the motors, even just powering up is enough to trigger the fault.

Early failures looked like they were gate voltage issues, but I confirmed with the datasheets that the 12V drive voltage and the MOSFET ratings (+-20V VGS on the gate) should all be fine.

Attempts to fix: Resistors (10k) added from gate to source to help with discharge or reducing spurious gate voltages. Did not help. Note the failed result, with pin 11 of the MIC4606-2 showing signs of case rupture. 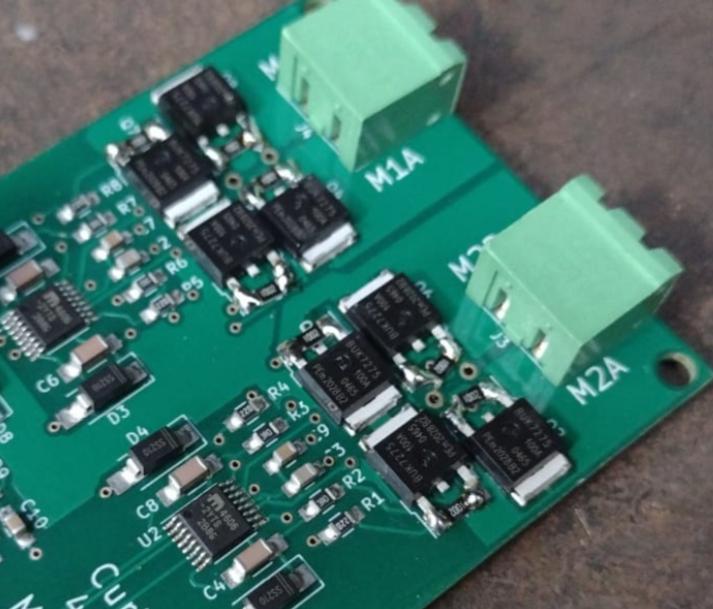 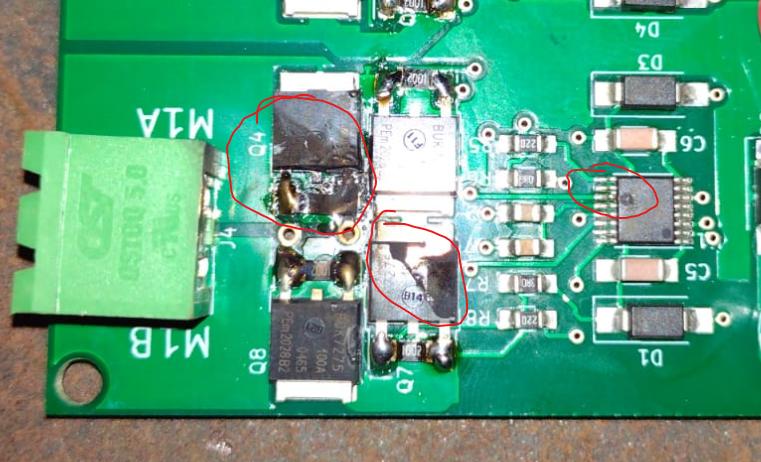 I thought maybe the gate->source voltages were peaking above 20V and killing the gates, so I also tried 15V zener diodes across the Gate->Source pins, but then for some reason we got no functional movement of the motors (but no failures either..). Not sure what went wrong with the zeners, it may have been a red-herring and my collaborator (remote from me) made a mistake somewhere. I thought the zeners were going to be a home run.

What more should I look at for diagnosing/fixing this? What could be killing my FETs only on 1 channel, and the other is totally fine? How can I make this thing more robust?

Extra Info from questions: Scope traces showing application driving the a 12V motor at "full speed" (joystick full tilt in that direction) for Q3 gate (yellow trace) and Q8 gate (blue trace). Note Q8 is "on" to conduct to 0V for the motor, and Q3 is delivering the source power (12V for these traces) at the required duty % (around 90% duty ) 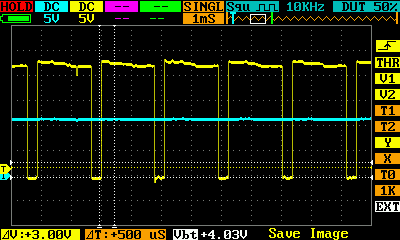 Scope showing the 'start up' pulses where on the system controller start up I prime the motor drive circuit on all channels. Again this is Q3 and Q8 traces in yellow and blue respectively. 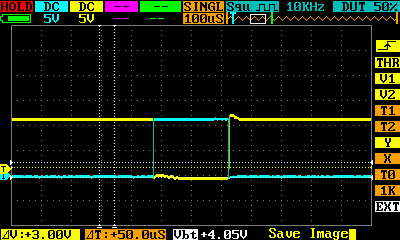 I don't see anything obviously bad going on here. Also quickly (low quality .. ) checked Q3 and Q4 for signs of cross-conduction but I couldn't see any evidence of both gates turning on at once.

Edit - proposed new schematic design with improvements and better gate protection Here's my adjusted schematics showing additional components to protect the input sides of things (for parasitic/inductive spikes on connection or power-up), including handling floating inputs to the MIC4606-2 chip, and a blocking diode on the 12V line so that 48V doesn't somehow find its way through the chip and into my control board.

The main H-bridge schematic improvements bring additional bypass and local power supply decoupling capacitors, gate pull-down resistors to keep them off if the MIC4606-2 chip releases control of the gates, gate capacitors and gate charge/discharge circuit with diode to give a 'fast' turn off. 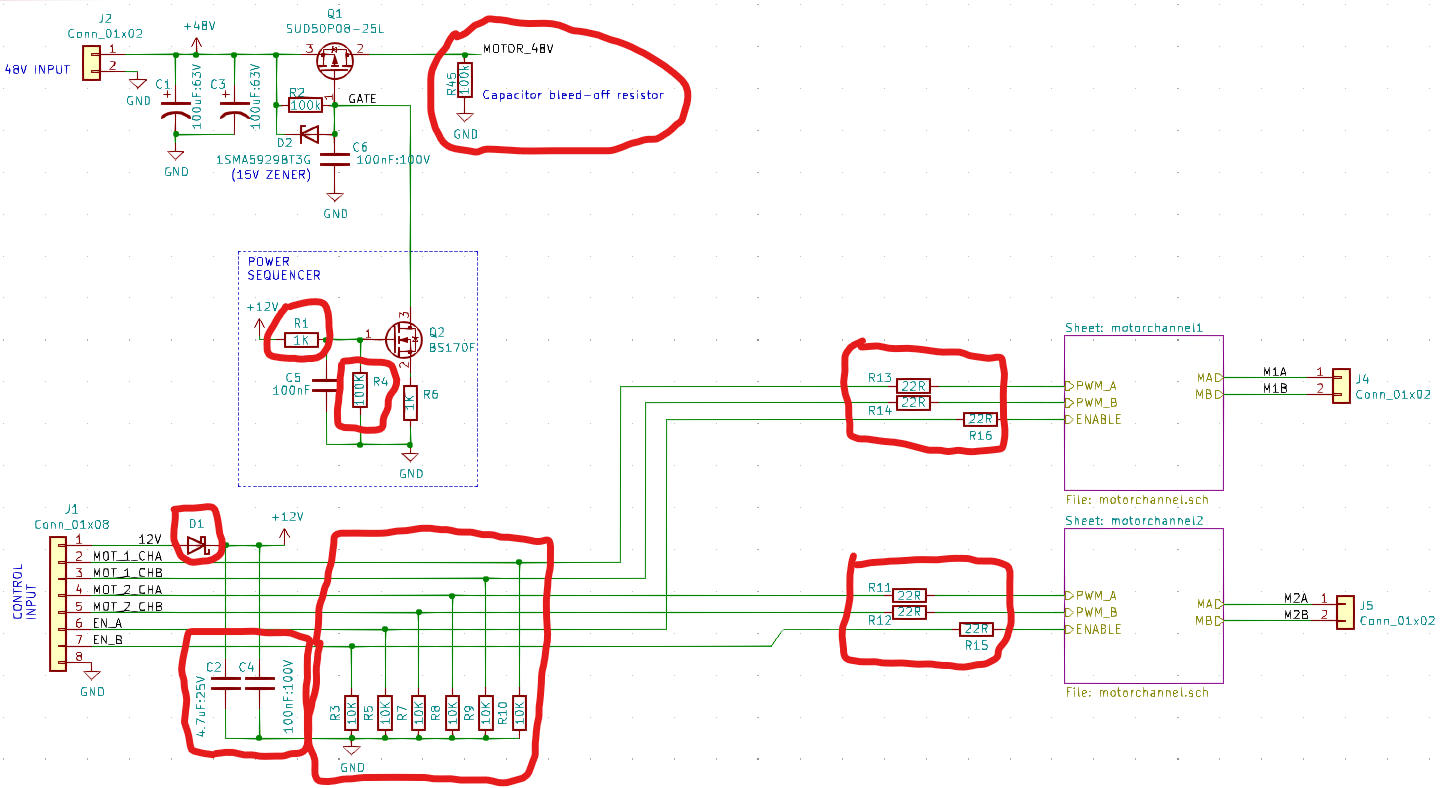 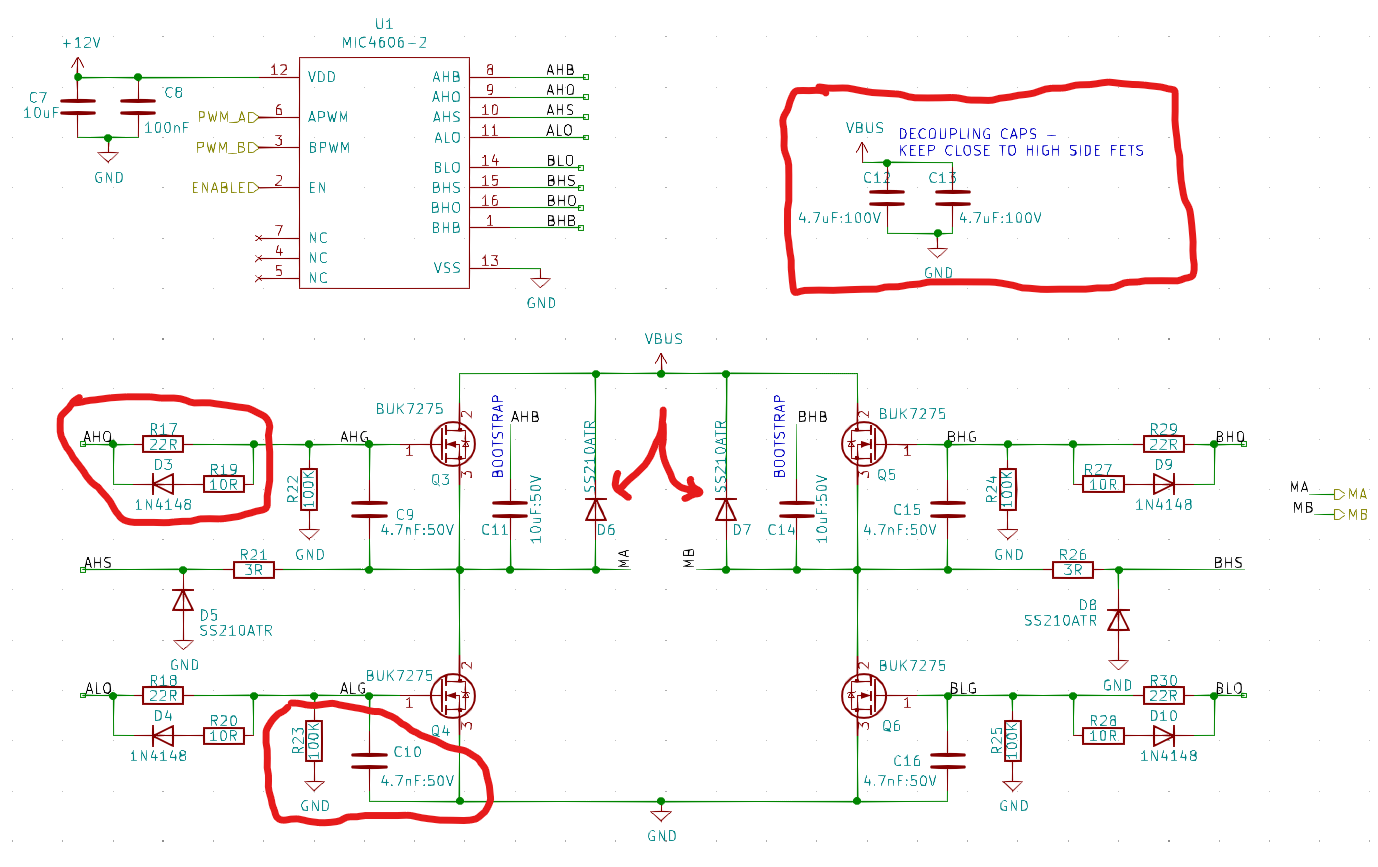 Q9 needs a resistor between gate and source, perhaps 47k to 100k, to ensure turnoff.
Q11 needs a series resistor from 12V to the gate to squash any transients on the 12V rail.
C10 should be across the zener.

Since you state that your circuit dies without a load, you have cross-conduction issues which is a sure way to kill the FETs. If you have cross conduction, you need to add dead-time to your PWM signal.
Once you sort out the cross conduction issues, start with a lower voltage for your 48V supply, perhaps 5 volts, so you don't blow stuff up.
Monitor the current on the power line feeding the FETs with an oscilloscope. If you have access to a high bandwidth AC+DC clamp-on current probe, use it.
If things are working fine at 5V, increase the voltage in steps making sure things look ok at each step.

Here are some of my observations. One of the first things I noticed is that the PCB layout is not symmetrical, so I looked for differences between the two channels.

The group-of-four traces in the bottom layer (Fig. 1) appear to be of poor quality and very close together with possibly a short circuit. Is this really the case or just a bitmap rendering artefact? Is "signal X" the same as ALO2? You are using suffix "2" for the control signals, e.g. ALO2, but suffix "1" for the motor, i.e. M1A and M1B. Is this correct? 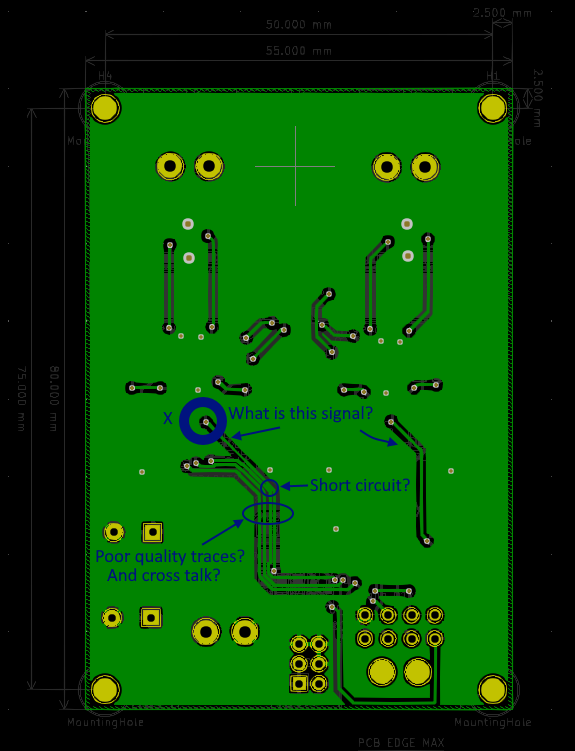 Is the 48 V distribution interfering with the signal traces near Channel 1? It appears to cross over the Channel 1 control signals, circled in Fig. 2. 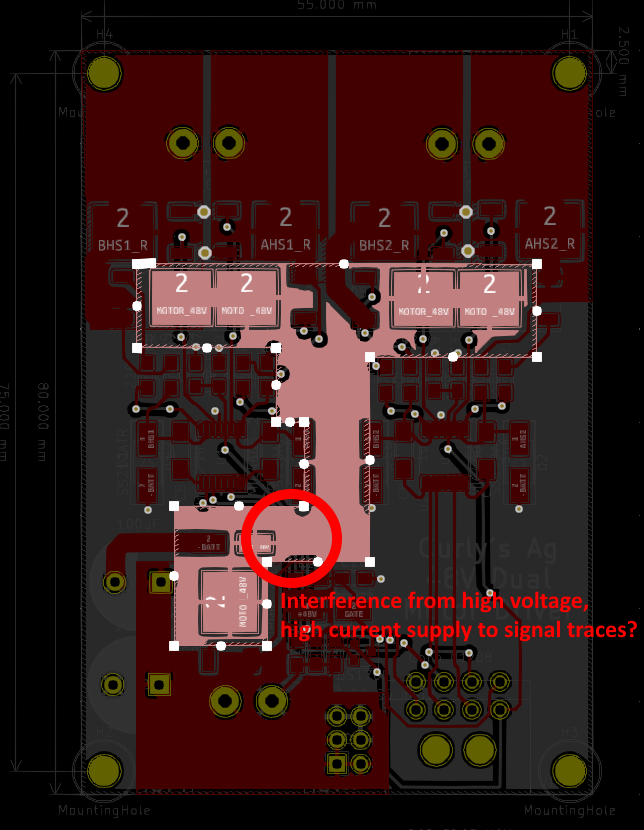 It looks like a high current has passed through the trace and via, damaging the chip at point X, circled in Fig. 1 and Fig 3. 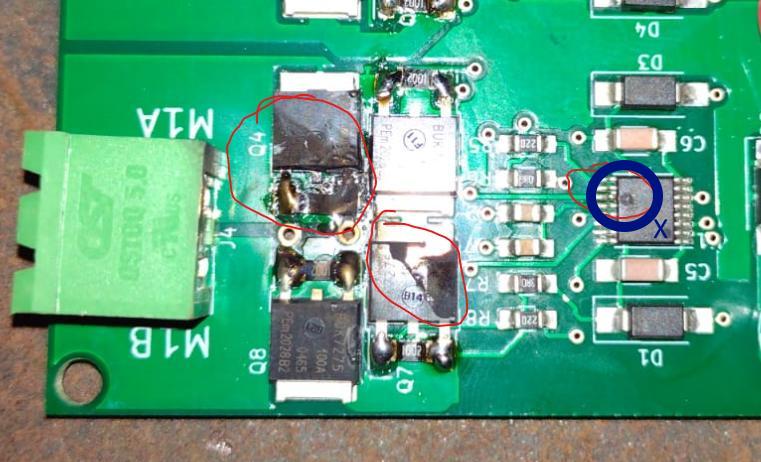 In your updated question you provided scope traces for Q3 and Q8 which are in Channel 2. My understanding is that Channel 2 is fine, whereas Q1 and Q6 are in Channel 1 which is dodgy. Could you clarify which transistors and channels you are referring to especially with regard to the signal and motor suffixes?

The schematic you have provided doesn't match the photos of the PCBs, e.g. which channel are C4 and C8 in? Perhaps this has caused some confusion between you and your remote collaborator regarding the placement of the Zener diodes. Did your remote collaborator obtain the scope traces with a different schematic to the one you are using? What do all the control signals look like when the module is powered up?

When designing motor control, there should be also current sense circuit and OC (over current) detection/protection.

Transistors are mounted on minimal footprint area without thermal vias, and so on.., so you have to considerably de-rate the current capability of the MOSFETs to appox. 1A for such placement.

The main issue, as I suspect is that you do drive your motors full FWD and full BKW, which is wrong. You may never drive at 100% duty cycle, since you have a bootstrap PSU for the high side MOSFETs.

You do have a gate resistors for high side MOSFET 22 ohm, but none for low side. I didn't look details for the specified gate driver, but I do think the gate resistors should be the same.

Beside the small footprint area and the case that instead of pouring the entire plane you have "isolated" the footprints and connected small traces to the plane. there is also an issue of not having any bus capacitance that will store the energy, so this is truly wrong.

But there are also other facts:

If the PWM frequency is low, then the current through the motor winding is discontinuous. You switch the upper transistor ON and lower OFF, for the ON pulse duration, then you switch upper transistor OFF and you must switch the lower transistor ON for the bootstrap. At the very first moment, the current will recirculate through both lower transistors, but then the current will change the direction and the motor will start to break. This breaking energy will be converted into a heat : winding resistance + MOSFETs Rdson resistance. Probably you do waste battery energy and you convert it into a heat due to low PWM switching frequency.

For a lifting operation of DC motor, the most suitable variant would be a four quadrant mode - 4Q. For a correct operation, you should have a capacitor bank to store the regenerative energy that in turn will charge the battery.

The motor speed is almost proportional to the applied voltage, meaning that H-bridge has to mimic the ideal voltage source:

To transform your H-bridge into this operation all 4 MOSFETs have to to switch at every PWM cycle:

With a such sequence and with an enough high switching PWM freqency, the converter and motor will self enter into a motoring or generator mode. You should ramp up to limit the motor current, but also ramp down to dump the energy into capacitor bank - that's the way you avoid that inertial energy is converted into pure heat, rather into electrical power.

Not the answer you're looking for? Browse other questions tagged mosfet pcb h-bridge mosfet-driver component-failure or ask your own question.

40
Is there an ideal PWM frequency for DC brush motors?

5
Build an H-Bridge Motor Driver with 4 N-Channel MOSFET
1
Why is my H-Bridge driver coupling low input into the high side?
1
Using p-channel mosfet on high side of h-bridge, do I really need a driver chip?
0
H-Bridge driver circuit design
1
Half Bridge with dual powre supply and two N-channel Mosfets?
2
Why this H-bridge with only N-channel FETs didn't work?
1
Is it possible to use an H-bridge IC as dual MOSFET driver?
0
24V, 200W DC motor Control using N channel H bridge