I thought that if the voltage source is 120V and the lightbulb is 40W then the current would be 1/3 of an ampere meaning that the resistance of the lightbulb would be 360 ohms. But when I checked it with my multimeter, it was only 26 ohms. The multimeter is not wrong. If I check a 1K resistor with the multimeter it reads 1K.

Filaments heat up to produce light and the tungsten they're made of will change resistance as this happens. The temperature change is let's say 3000K, the temperature coefficient of resistance for tungsten is 0.0045/K, so the resistance when the bulb is on will be about 13.5x what it is when it is cold. Plugging in your measured 26 ohms gives 351 ohms when hot.

As we can read from the graph the current will be equal to:

And in your case, we have a similar situation, the resistance ratio is 360Ω/26Ω is also around 13.8

The cold resistance of a incandescent light bulb is considerably lower than the running resistance it has during use when hot.

A rough estimate is that hot resistance is about 10x larger than the cold resistance. It also means the switches and wires see roughly 10x larger current surge when the light is turned on.

As other answers has already explained, as the filament heats up it will increase its resistance.

There is one more parameter that you possibly would take inte account. As the light bulb is connected to AC a number of other effects may come inte play. I list them in no particular order:

The unstated assumption in your question is that Ohm's law (\$V=IR\$) is applicable to any device you can put an ohmmeter on.

This is not true. Here are some examples of devices where it does not hold:

All of these things have some relationship between current and voltage. For example, an ideal capacitor:

This equation isn't a law named after anyone: it's simply a definition of capacitance. When we have some device which has some behavior which can be sufficiently modeled by this equation, we call it a capacitor with capacitance \$C\$.

Likewise, Ohm's law is a definition of resistance:

This equation is simpler, and it has a name, but regardless it's only applicable to resistors.

Other answers have said a light bulb's resistance increases with temperature. While this is true, I don't think it's a good enough explanation, because it still suggests maybe all things are somehow subject to Ohm's law, when quite clearly they are not. What good is a law that says current and voltage are related by some ratio called "resistance" when resistance can change?

There's a bit of a subtle trick here: while "resistance" and consequently Ohm's law only applies to resistors, there's a second use for the term in creating simplified models for devices or circuits. Consider the Shockley diode equation for example, which describes how current and voltage are related for an ideal diode:

This is a rather complicated equation. Many of the terms are parameters that will be particular to a given diode (and probably vary with temperature and frequency), but even after simplifying those you're left with an exponential relationship between current (\$I\$) and voltage (\$V_\text D\$). If you plot voltage and current you get something like this: 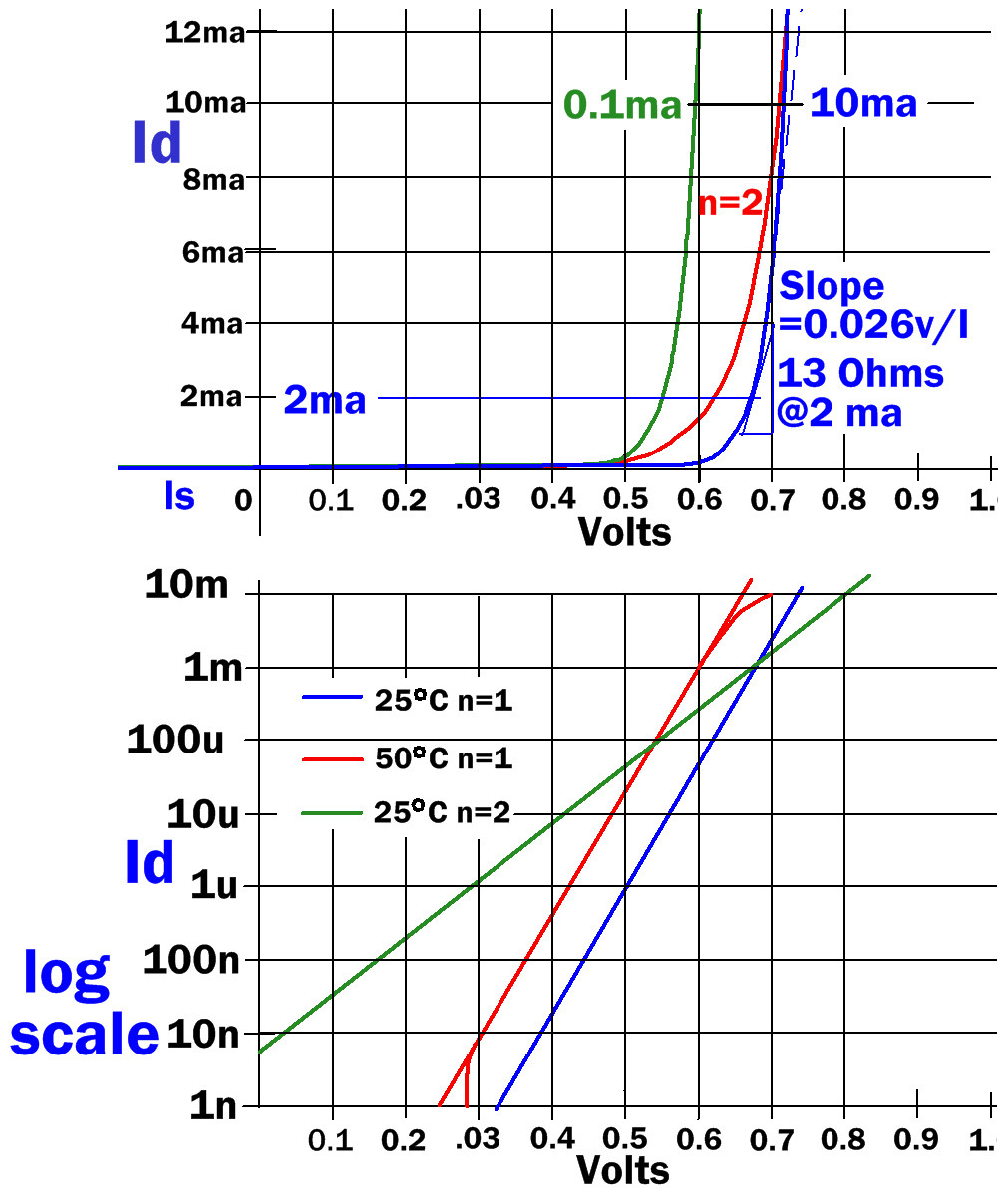 While it's essential to understand the exponential relationship exists in general, you may only be interested with the behavior of the diode over a very narrow range, say from 0.78 to 0.8 volts. On such a small scale, it might be "good enough" to call this exponential curve a linear one. Then you can take the slope of that curve and call it "resistance", and now you can substitute the complex Shockley model for a simpler linear one as long as you stay within that assumption of 0.78 to 0.8 volts.

In other words, it's not that a diode obeys Ohm's law in any way, but that you've elected to make a simpler model of the device which is sufficiently accurate within a range of assumptions. If you know the diode is operating within 0.78 to 0.8 volts, and the "resistance" is 13 ohms, then you can easily calculate that if the current increases by 0.1 mA then the voltage will increase by \$0.1\:\mathrm{mA} \cdot 13\:\Omega = 1.3\:\mathrm{mV}\$.

When someone says "the resistance of a light bulb increases with temperature", the situation is similar. Light bulbs have a current-voltage relationship which depends on temperature to a large extent. Modeling that temperature-dependent behavior may be unnecessarily complex for the task at hand, and so engineers, not wanting to make things harder than they need to be, have determined that assuming the temperature of the filament is reasonably constant, the current-voltage relationship of a light-bulb can be approximated by a simple linear equation. It's not that light bulbs obey any "Ohm's law": it's that someone has taken a complicated model of a light bulb and made a simpler one.

2
Finding the current flowing in parallel circuit
0
how does ohms law apply in power system
0
Varying resistance on same types of capacitors
1
coil resistance
0
Calculating current in a series circuit
0
How to read a multimeter (digital) -- should I get 2A readings from a couple of AA batteries?
0
Where did I miscalculate ohms law in my experiment?
0
Why is the resistance on my PCB low?
2
Why does this current not match my multimeter?
1
Why is the voltage across my nichrome wire so low?