I have a LED-ring PCB, relatively new, that we sent through a few temperature cycle tests (-50 to +85*C), and it now shows signs of the solder-mask coming off some of the copper traces.

The LEDs weren't powered during the temperature cycle tests, and the tests were not oriented at the PCB but rather the weatherproofing of its enclosure. The PCB is mounted in an aluminum+glass enclosure (aluminum acting as heatsink) to be installed outdoors in the ground, so it'll be exposed to harsh temperatures.

The images show the slight damage to the traces on the bottom and the top of the PCB. A multimeter test confirms that the copper trace is exposed on some of the positions. 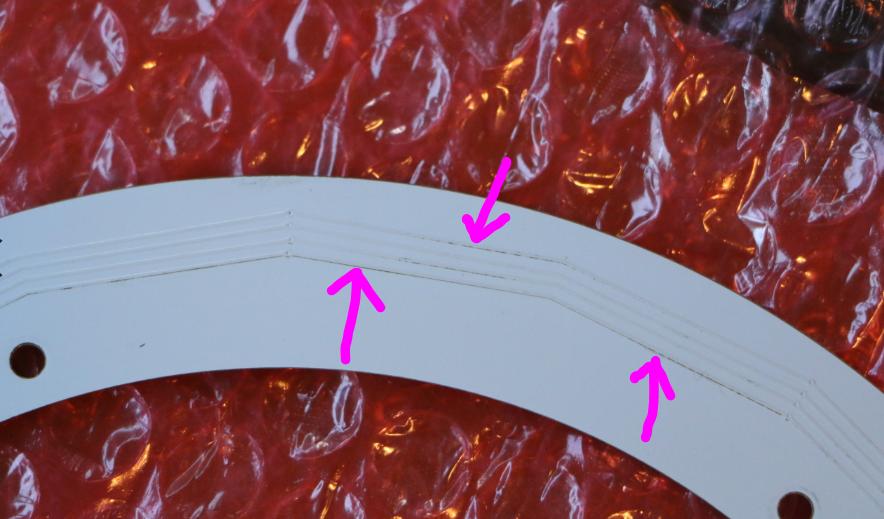 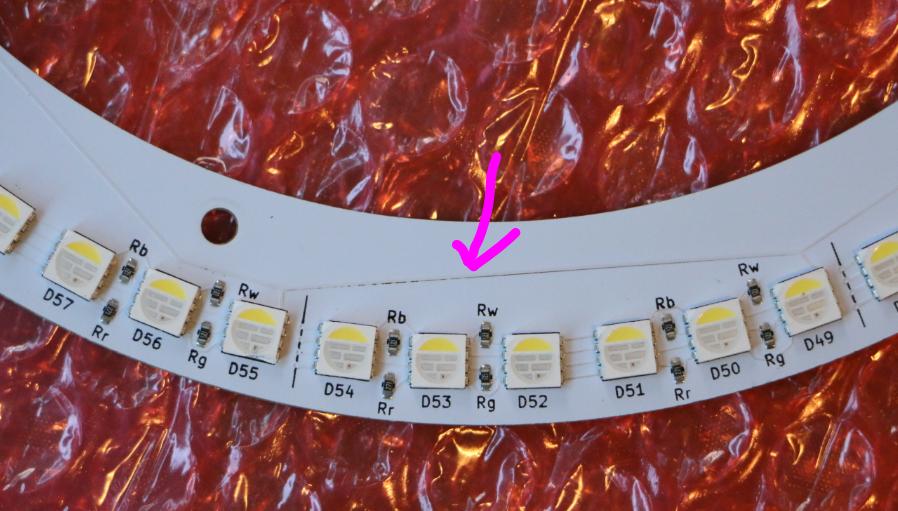 I am trying to understand if the soldermask coming off is

If it's the first (typical temperature issue) would a conformal coating help to just keep the traces insulated (they do sit on top of aluminum)?

I don't think it's as much of the soldermasks fault as the thermal coefficient of expansion between copper an aluminum, and the large PCB and features.

Which doesn't sound like much, but if the temperature range was expanded to 100C (which means something like -20C to 80C or -40C to 40C) it would amount to ~0.7 mm or about ~3mil (which is probably around what is shown in the pictures above).

It doesn't really matter what you put on that PCB, those traces are probably going to bulldoze it right out of the way. A better way would be to design the traces to facilitate the expansion. Unforntunatley this is more of the relm of mechanical engineers (at least at this point I would turn the problem over to someone else in my group and let them run an FEM) they may have better suggestions of how to deal with this problem). If I were facing this problem myself I might try building in 2D 'springs' that could handle the stretching across the face of the pcb. Another option would be to contact the manufacturer as they likely have resources to deal with this (or have seen it before).

Another problem that you may face is eventual delamination of the trace from the PCB if this stretching continues, it depends on what the prepreg/adhesive layer (whatever the manufacturer is using) can handle strain.

30
High PCB copper thickness: What are the pitfalls?
4
Formula for voltage drop vs PCB trace width, temperature, current, and trace length
0
Best approach/practice to design PCB which can handle 50-80A current?
4
Grounding PCB Within Aluminum Enclosure
1
Best practices for a phenolic spacer design to facilitate heat transfer?
87
Looking for circuit board material that can be dissolved
1
Designing PCB with AC Live and Neutral on two layers
1
How are high currents generally handled on PCB?