Why is my Arduino's GND pin emitting power instead of grounding it?

I was debugging the circuit below with my new multimeter when I found that my Arduino's ground pin was actually emitting power. I connected the longer leg of an LED to the ground pin and confirmed that in fact the pin was powering the LED.

I feel like this is likely the issue I am having with this circuit and am wondering what would cause the ground pin to emit a non-negative voltage? Better yet, how could I solve this problem? 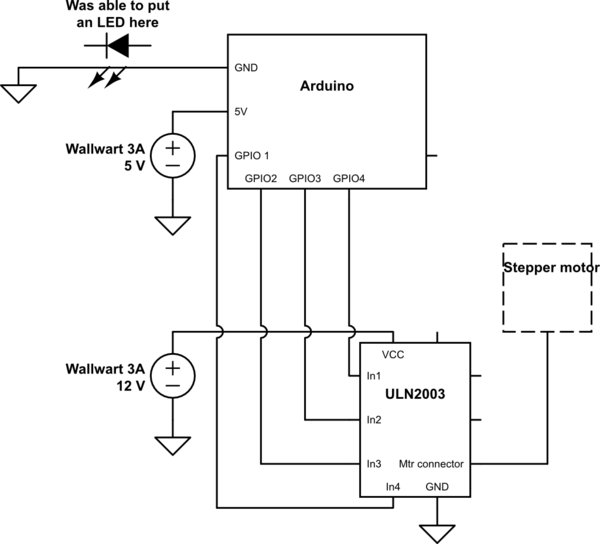 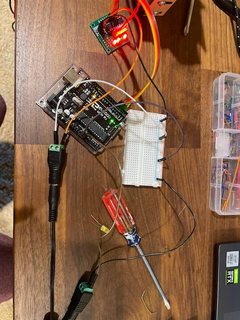 Arduino takes in power by consuming current from the 5V supply via the 5V pin. The current then must return out from the GND pin back to the power supply. That current will light up a LED if you put it in the path of current taken by Arduino.

Just remove the LED because it does not belong there to begin with and the circuit is fine. If the Arduino consumes more current than the LED can handle the LED will get damaged and it can burn out.

You need to hook that ground pin up correctly. In the mean time, yes, expect current to come out of it.

Driving a motor (or any other inductive load) requires a very low-impedance ground return system. Looking at the photo, those long, thin wires and that white solderless breadboard just aren't the right construction approach for driving a motor. There are transient effects (which you can't see without an oscilloscope) when the ULN2003 switches on and off, which can send surprisingly large currents through the ground return system, and that in turn causes "ground bounce" errors.

The diagnostic test of putting an LED in series with GND only demonstrates that there was some current flowing from the Arduino into the ground return system; it's not an indication of trouble. But it's not a good diagnostic test, because a side effect of this test is that it raises the voltage on the chip's GND. So instead of getting the full 5V supply voltage, the Arduino only gets maybe 3.5V (assuming 1.5V LED forward voltage), and the logic levels are referred to the Arduino's GND pin, not the ground return system. With such a very large voltage drop as an LED gives, that can be enough to make the logic levels be mis-interpreted by things outside the Arduino.

It's a fairly common problem, because on schematics we just drop a ground symbol anywhere and just assume that the ground return currents do whatever they need to do. On a PCB with a groundplane, that's a valid assumption; but for motor driving, the ground return system is an important part of the system as a whole. Most of the large ground current will be flowing in a loop around the motor, the ULN2003, and the power supply. The key is to make that high-current loop physically as small and compact as possible, with the widest diameter / shortest length wiring you can mange. Once you have that, the low-current Arduino ground can be connected using the kind of wire you have in the photo.

All currents flowing into the Arduino - on its power pins and I/O pins - must have somewhere to flow out of. That is the purpose of the GND pin.

Now we've established that there should indeed be a current flowing out of the GND pin.

Now observe that the LED is a device that acts like a current detector: the more forward current, the more light it produces (until it gets destroyed with too much current).

So, by putting the LED in the GND pin's path, you're just measuring - indirectly - the ground pin current, using a current meter with rather high burden voltage (1-2V).

That's all. If you want to actually measure the current, use a current meter (A or mA mode on a multimeter), not an LED.

what would cause the ground pin to emit a non-negative voltage?

It's not really emitting a non-negative voltage, it's emitting a current from all of the loads (transistors) that are internal to the Arduino. If you put a meter on the ground pin, you'll see a voltage difference (example 2).

When an LED is placed on this pin, it raises the voltage of the entire Arduino (Example 3). This has a few bad effects.

Not the answer you're looking for? Browse other questions tagged arduino power ground or ask your own question.

1
How should I wire up ground when using an ATX power supply to power an Arduino and several LED strips which in return are controlled by the Arduino?
1
Why is ground voltage non-zero, and why does it increase when I plug in an LED?
0
How to ground the below circuit when I use USB?
0
External Power Supply Grounding Scheme
1
Why do I have to put my transistor after of my component, instead of before?
0
Reason for voltage between grounds on Oscilloscope and Function Generator?