I am reading Audio Power Amplifier Design by Douglas Self and have a couple of questions. 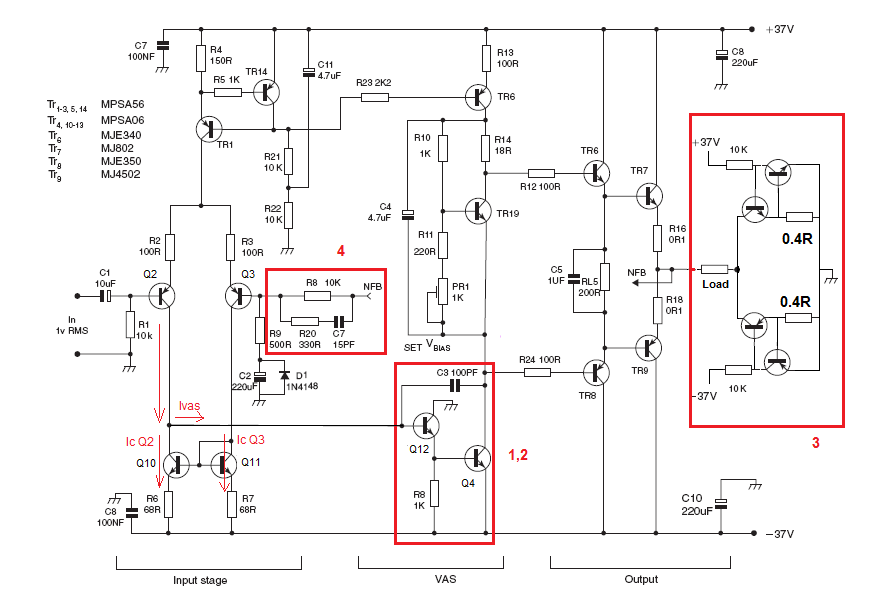 But in reality, VAS being a Class-A amplifier means 6.5mA quiescent current flowing and Q4 collector is at GND minus 1.4V.

Again, in reality, Q12 and Q4 are not smoked or dissipating that much heat. What is wrong with my analysis?

Say, smaller BJT pair (like TIP29A/30A) are used at output stage and I want to limit load current to 1.5A - of course CCS transistors will require serious heatsink.

I editted original image and my question 1 and 2 to clarify my points.

With no input signal there's still the DC operation going on. The feedback forces all currents and voltages to settle to those values which generates to the load same voltage which is at the base of Tr2 - that's 0V, fed through R1.

You should know, that the circuit is essentially a non-inverting amplifier made of an operational amplifier. I mean this (Wikipedia image): 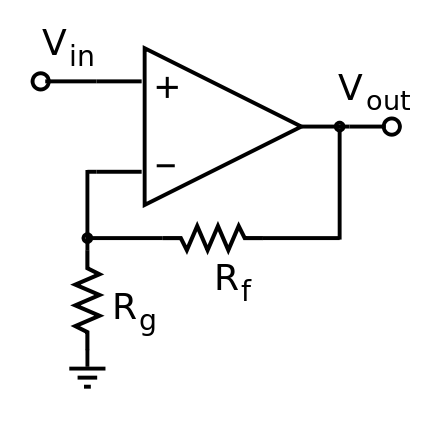 The opamp is in your case made of discrete transistors for high enough output power. All of its transistors except the output transistors conduct all the time for proper class A operation - no clipping as long as the amp is not overdriven.

The voltage gain is (1+Rf/Rg) . In your version the effective Rf is reduced at higher frequencies by C7. You see there's also another miniscule capacitor C3 in VAS. That also affects to the frequency response. Those small capacitors have common role. They are there to prevent your amp oscillating. Oscillating would mean full power continuous output at high frequency, for ex at 30kHz.

To fully know the subject you should learn what frequency compensation of feedback amplifiers means and how it's done in terms of rigorous circuit mathematics. Every opamp application theory book above hobbyist level contains it. The qualitative explanation can be found also in many hobbyist level texts.

Your current limiter can be designed to work. But it's not simple. Know that your drawn starting sketch of the limiter tells nothing of what actually works. It also doesn't tell where you thought to connect the wire ends. You should search for earlier tested and working full solutions. You can easily cause stability problems, a short circuit to elsewhere and overheating.

I would insert for limiting 2 things:

As suggested by others, run simulations. Get some capable enough program. Component manufacturers like Texas Instrument or Linear Technology offer good ones. There's also an independent previously high priced item Micro-Cap. The developer of it has retired and gives now his masterpiece for free. The latest version is v12. I use a much earlier version (=v10) because it seems to fit better into my legacy computer. Micro-Cap knows numerous components, but of course, there's no newbies without inputting the model parameters or building a macro model.

ADD1: The updated output current limiter may work but it causes distortion at high levels. The harmonics can blow the tweeters. It causes also very bad distortion at low levels because transistors are non-linear in low voltages. Quiet sounds are like a saw. The aural effect is the same as zero-crossing distortion in badly biased class B amps.

In addition if your speaker has short circuit it prevents the fuse blowing. The output transistors (Tr7,Tr9) can overheat or get destroyed due secondary breakdown. You see the safe operating area in power transistor datasheets. Simulate! It's useful.

ADD2: After you labeled the problematic currents in the image

With no input signal into Q2 base, no current should coming out of Long-Tailed-Pair

That's not true, TR2 MUST remain biased meaning, a DC current must flow. And it does. No signal means that the current through Q2 will be constant, meaning, it is DC and had no variations, meaning no AC current. But the DC remains.

You're forgetting that the 1 V input signal will NOT appear between the base of TR2 and TR3.The base of TR3 will follow that input signal as this amplifier has feedback (R8, R9, C2) which makes it like a large opamp with feedback.

3 Can I put a current limiter in the form of Constant-Current Source/Sink (CCS) at the power supply?

Sure you can but WHY? If you want to use such an amplifier for quality audio reproduction then you don't want a current limited supply as unexpected things might happen and you could destroy the tweeters in your speakers. If you're worried about overloading the output then use a circuit with build-in current limiting at the output stage.

Of course that simple 2 transistor current mirror will cause a mismatch in the currents in the two sides of the input stage because of the 2*Ib extra being pulled by Q11. This imbalance will also contribute to an Ivas current.

Not the answer you're looking for? Browse other questions tagged capacitor amplifier feedback current-limiting voltage-amplification or ask your own question.