powering a series LED with a battery

I am working on what you could call a brake light for a car but I was having a little bit of trouble understanding how it should be powered. So, I plan to have 3 high power LEDs in series connection.

But I want at least 400 lumens per LED so the current through the series connection should be around 1 amp or more. That means that the power drawn from the battery would be 12 watts assuming a 12V battery.

If I have three LEDs with forward voltage 3V and drive current of 1 amp, that would be I need a current-limiting resistor (3V/1A) = 3 ohms. That doesn't make sense to me, obviously because a 3 ohm resistor in a circuit is uncommon. But would you rather then add no resistors at all?

A parallel connection would suck more current from the battery so for powering 3 high power LEDs, series is probably the way to go. But my approach doesn't feel right. Additionally, if I want 400+ lumens, do you think 12 watts is excessive? From the LED site I linked, it roughly is 170 lumens/watt, so about 3 watts should be good. But then from 12V you would need to draw (4W/12V) = 1/3 amps and 1/3 amps is not sufficient to meet the drive current limits of 1+amps.

I'm just really confused and I feel like I'm not optimally using the 12V battery, but anything would help, thanks!

In theory, your calculations and 3 Ω would work, but a car battery is only nominally 12 V, and is usually between 13 and 15 V. Because the neatly fixed VF of the LEDs takes up much of the available voltage, it means that even a small change in battery voltage will lead to a very large change in LED current (and power in the resistor).

Automotive electronics are usually designed to work well with battery voltage between 9 and 16 V, while surviving occasional excursions to 24 V or higher. Your circuit would be destroyed with these higher voltages (e.g. at even 15 V, you would have 6 V across the resistor, 2 A in it and 12 W).

Because of the relatively unregulated battery voltage, LED drivers usually use a DCDC converter to regulate the LED current. This also has the advantage of being more efficient, and doesn't need a high power resistor to dissipate the waste heat.

The 3 ohm 3W resistance is correct. Yet the ESR of a 3W LED is less than 250 mOhms so the current and lumens can still vary significantly from 11.5V to 14.5V if you had no resistor with 4 LED’s or almost 1 Ohm for the string.

But (good) commercial lamps never use this method.

Instead current sensing is used with a 50 mV drop then amplified if necessary and compared with the voltage reference to control the desired constant current using a power transistor to dissipate the heat to the chassis. This is the simplest stable method. If you didn’t care about the brake light getting dim if your alternator stopped working at very low RPM you might get away with 4S instead of 3S.

Originally cars used PWM to regulate average current, but then eye flicker from a moving car became a distraction as peripheral sensitivity was greater on higher flicker PWM rates when Cadillac first introduced LED brake lights. They don’t do that any more.

In other cases 4 series LEDs are used with a buck boost regulator is more efficient to regulate the current near 12V as the car voltage can swing from low to high voltage. This is the preferred method.. (Although the efficiency is much better, it is worst when the input is exactly equal to output voltage.)

Your series resistor calculation (3ohms) seems good. In a parallel connection you would waste too much energy on resistors to decrease from 12v to 3V.

As other mention the actual voltage of battery couses a huge change in Led brightness. An easy method is to use simple current source below so it can regulate the brigtness (current) to constant level no matter how battery is drained.

You must use a power transistor like BDxxx (even with heatsink maybe) and set the desired Led current with little changes of R2 resistance (2W type at least). R1 depends on transistors Beta, 470ohm is good for Beta 100, for Beta 50 use 220 or 330 ohm rather. 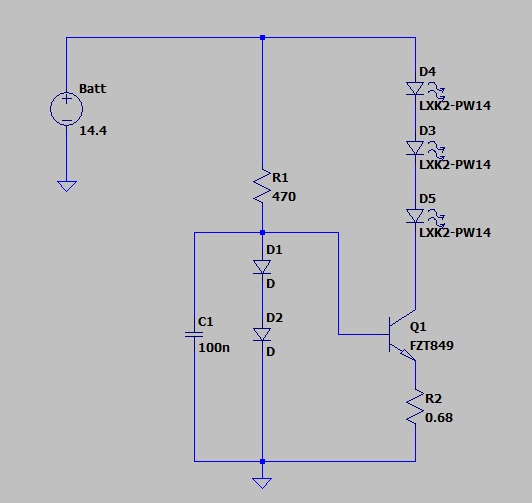 Not the answer you're looking for? Browse other questions tagged power-supply led circuit-design led-driver or ask your own question.