What does this beautiful 8-winding magnetics do?

Sometimes our magnetic components turn out to be beautiful, like this one: 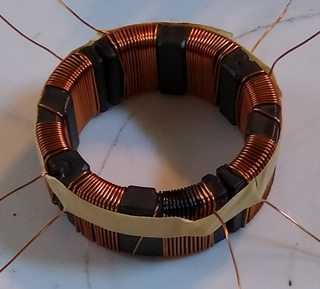 I took this out of what looks like a projection TV, where there were three of these. Does anybody know what it does? I suspect it is a fine adjust of position.

Here is how it fits into the part that I believe steers the electron gun. 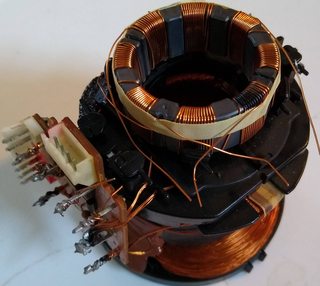 This could be part of an electron beam stigmator. A solenoid with an axial magnetic field can focus/defocus an electron beam. If you have 2nd order and higher astigmatism to correct, you need higher order magnetic fields, which could be produced by this structure. Depending which coils you energize you get quadrupolar fields in one direction of 45° different.

This image from here shows it fairly well:

To add to the previous good answer some intuition as follows with optics and waveform required.

In optics we have corrective lens that depend on the spherical and cylindrical correction opposite to the eye’s deficiency. The spherical diopters either magnify or condense according to the limitations of near or far field focus respectively. Astigmatism is the cylindrical lens corrections which create the elliptical distortion of pinpoints are corrected by the linear cylindrical curve across the horizontal axis.

Similarly, magnetic stigmatic correction is done by a sawtooth weak current to stretch or contract the horizontal sweep of the electron beam. The diagonal opposite gets the inverse current so that axis has a null sum of stigmatic correction to create a slight cylindrical correction for each axis to result in a spherical beam. The transition ramp occurs during the blanking horizontal retrace interval.

With 3 of these, astigmatic correction can be made for each RGB colour which is emitted from nearby yet different parts of the gun.

Not the answer you're looking for? Browse other questions tagged identification components magnetics or ask your own question.

4
Magnetic Field Transmission
5
What is this part? PN:R19F 2E
15
How does this iPhone app measure the power flowing through an AC appliance cord?
0
Help identify a component on VS-TY2662-V1 LCD driver board
9
How does Ethernet magnetics work?
2
Strange component with marking SE-B3
11
Why use aluminum wire in an (old) TV degaussing harness
0
What kind of component is this, and is it damaged?
4
Is it possible that north and south poles of a disc-shaped magnet change position over time?