I'm a complete rookie in the world of electrical/electronic engineering so please excuse the potential stupidity of the question since all the resources I looked at didn't even feel the need of explaining this bit. 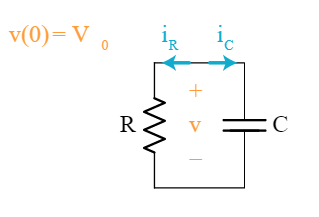 As you might've already guessed, this is used as a basis for writing down the KCL equation at the top node, which turns out to be a simple FOD. Then, this equation is solved for modelling the voltage across the capacitor over time.

Now, I understand how the FOD is solved. However it doesn't make any sense that there could be a second current opposing the direction of i_r. How I see it is that there is only one voltage source at this point in time and that is the capacitor. Considering the current moves from high-potential to low-potential, there could only be one current direction and that is depicted by i_r. What am I missing in this logic? Thanks in advance.

So after giving it a little thought and reading your answers, I landed on the following intuition:

Since it is series circuit the current will be the same for all components and it can be portrayed from two different points of view. These are the capacitor's (which is given by the capacitor-current equation) and the resistor's (which is given by the Ohm's law). They must be equal to each other in magnitude since it is a series circuit, and they must be in opposing directions since the current is travelling from high to low potential. Which gives the equation i_r = -i_c. Hence of course i_c + i_r = 0.

Is this logic correct? If not, where do I go wrong? If so, where does the KCL bit come into picture? Is it like we assume some kind superposition happening with these POVs of components?

P.S. Thanks heaps to everyone who answered so far and anyone that will answer in the future. Again excuse me for the naivety of the question.

Ic seems to be misleading unless Vo is a negative voltage Ic is the same direction of current as Ir as you expect. So as shown Ic=-Ir.

The diagram is not very intuitive.

What you need to understand is that it is a node with two branches connected to it, hence it has two currents entering/leaving it, even though it is just a straight connection.

Not the answer you're looking for? Browse other questions tagged circuit-analysis capacitor or ask your own question.