I have this simple op-amp circuit used to amplify the voltage drop across an unknown resistor with a value between ~0 and ~20 ohms. The circuit works close to expected, but there is an offset - when I short RSENSE_A+ and RSENSE_A- with a "zero ohm" calibration shunt, I see 0V at TP13 but roughly -25mV at TP7. RSENSE_A- is connected to ground, so in essence I am shorting U6 pin 3 directly to ground.

Using a calibrated resistance box I have obtained the values below at TP7. (note this version of the circuit has a 4.2 ohm resistor in position R9, so the current flowing through the sample is actually 48.4mA). As you can see there is significant (20-150mV) divergence in results between calculated and actual.

What am I missing here? Is this a limitation of the op-amp I've chosen? If it is, which parameter is causing this and how should I be selecting for it in future? 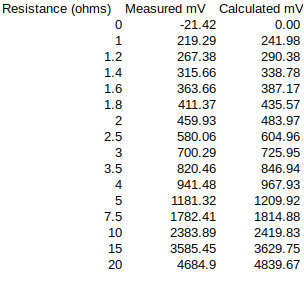 This is a combination of a few factors.

Ultimately, the RC4580 is an audio op-amp, and is designed with different design goals in mind than yours. It is designed for extremely low harmonic distortion, but doesn't feature things you want here, like low input bias current, low offset, or offset nulling features.

You'll want to consider selecting an op amp that offers low offsets or a means of nulling the offset, as well as a low input bias current. JFET or FET-based inputs will provide this, especially at frequencies near DC (at higher frequencies, the reactive currents flowing into the input capacitance will start to see imbalanced impedances again).

Another concern I see here is the ground mismatch between the negative terminal of the resistor and the ground used in the op-amp feedback circuit. This could also contribute to an offset voltage, especially if the layout is poor, or other large currents flow through either the GND or V_CCS- nets.

1 This figure is listed in the datasheet as a conditional value only valid when Rs < 10k. The impedance of your feedback network is large, it could be even worse, but is not documented.

Best approach is to use a better op-amp. A precision (high gain, low offset, low input bias) op-amp would improve a number of accuracy issues at once.

For example, a OPA2182 dual op-amp will give you maximum Vos of 4uV and input bias current of less than 1nA over a good temperature range.

Moreover the Vos drift with temperature is extremely low due to the internal auto-zero functionality.

The part has sufficient input range, and rail-to-rail output.

There are other such op-amps which you can search for on any distributor website or on the websites of makers of precision op-amps such as Analog Devices, TI etc.

I should mention that to actually achieve results commensurate with what that amplifier is capable of careful construction and layout is required. It doesn't take much to introduce a few uV of offset, especially with relatively high currents such as 50mA flowing. A 25mm length of 3mm wide (1" of 1/8" wide) 1oz copper will drop 200uV with 50mA flowing. RF interacting with input nonlinearity can cause large DC offsets.

Not the answer you're looking for? Browse other questions tagged operational-amplifier analog shunt or ask your own question.

20
How do I correct the offset voltage of op-amps which have no explicit offset-null pins?
7
Why is the bias input current of an op amp a constant value?