I am having some trouble with an attenuator circuit as part of an automated test tool I am working on.

As part of the design I need to attenuate a +/-10V input signal down to +/-5mV with some offset, I came up with the below circuit and implemented it however I am having issues I didn't expect where if I set my midpoint reference at half supply I get a non-linear output from my circuit, however if I bump the midpoint reference up to 2V then it responds much better.

My Scope plot shows the following

I think the vertical drift can be explained by the CMRR of the op-amp (approx 100dB) but dont understand why the shape should change unless I am starting to clip against the supply rails.

To make things easier to read I have re-plotted it as output vs input. 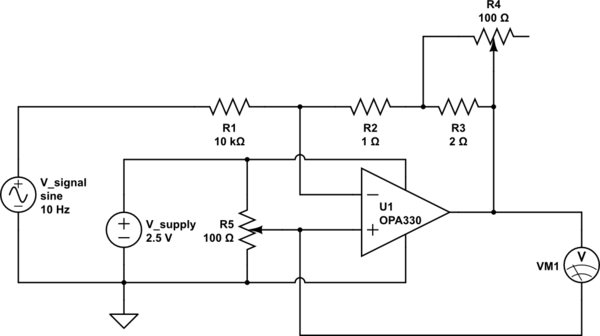 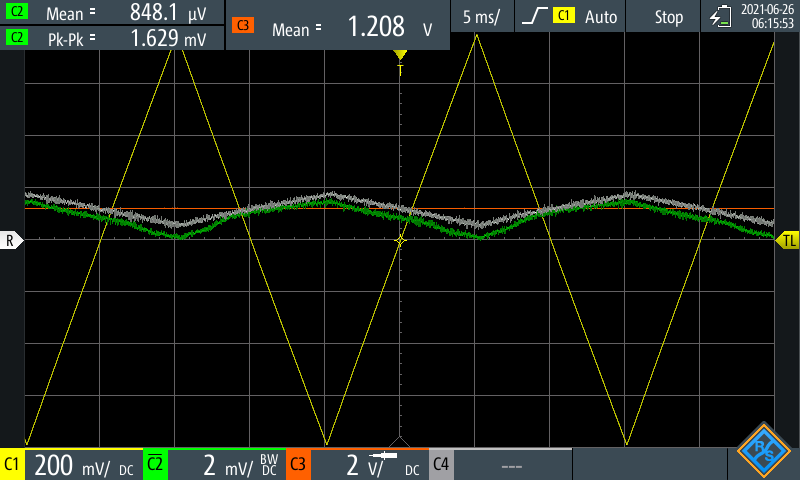 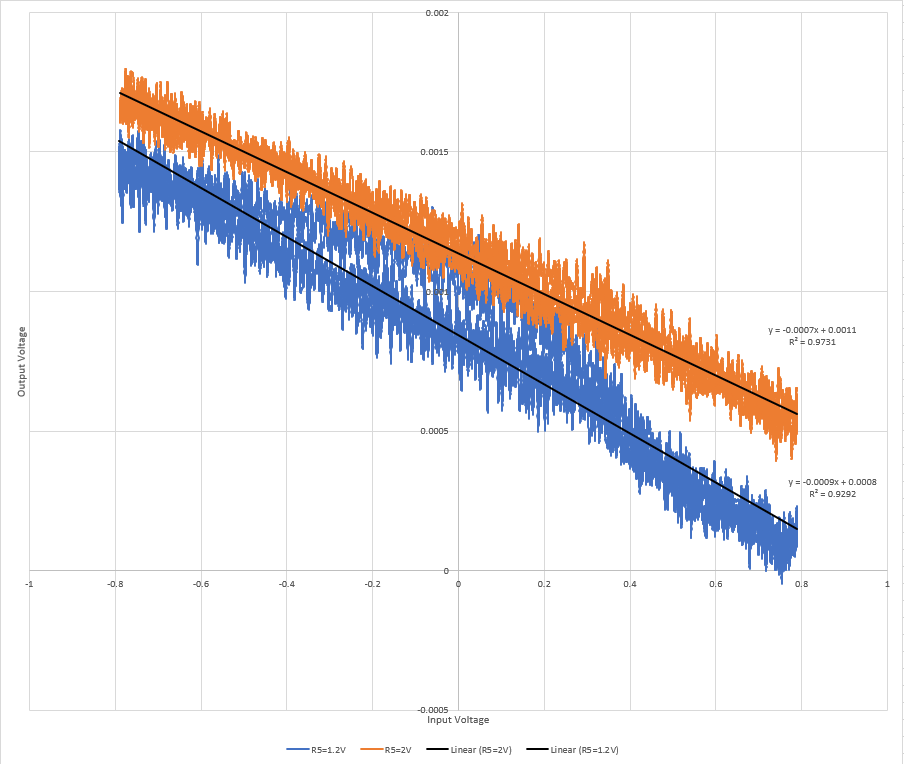 So I managed to make a little more progress, going over the datasheet again I noted the section 9.1.6 Achieving Output Swing to the Operational Amplifier Negative Rail where it reccomends applying a small load either to GND or a lower voltage rail if high precision is required close to the negative rail. Lo and behold, I thrown in a 20k resistor and things behave more linearly if pulled down to -5V, and they almost behave if pulled to 0V.

See the below chart for my results. I still have questions though, what in the datasheet should I have been looking at to determine what "Close to the negative rail" means, is 1mV close or is 1V close. Secondly why do I see so much variation in my output in terms of the vertical shift as I change the midpoint reference. I am seeing around 1mV/V of shift which would point at around 60dB CMRR if I worked it out right, way less than the rated 100+ datasheet value. 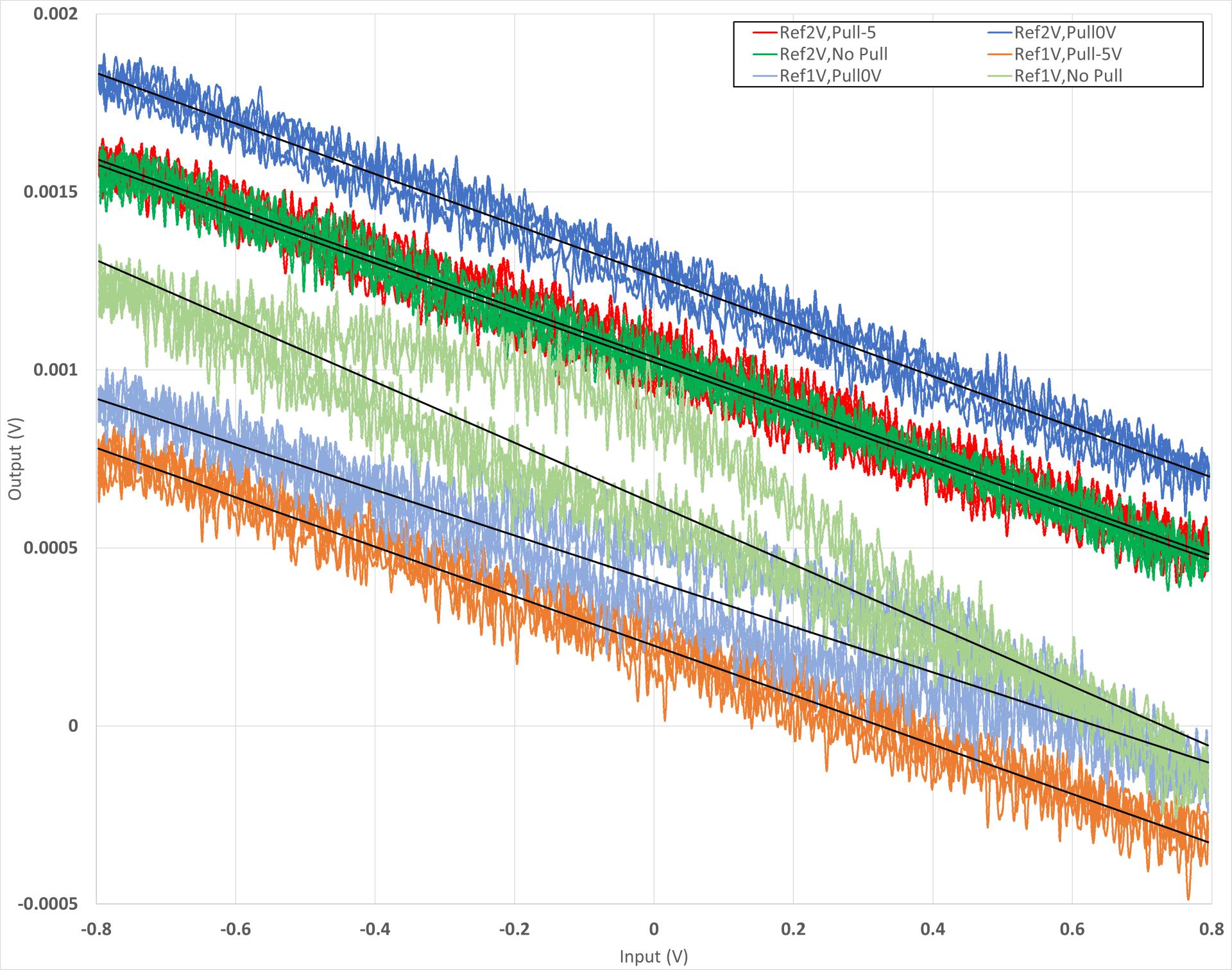 Let's consider the basis of your circuit: 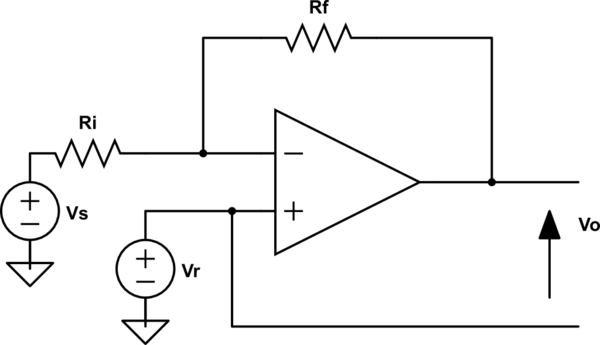 Note that Vr is not suppressed by the CMRR of the op amp, but simply by the factor Rf/Ri. So for your values, a 1V change in Vr should lead to 3/10000 Vr = 0.3mV change in the output. This is roughly what you measure.

As far as the non-linearities are concerned, or the changes in Vr sensitivity due to output loading, I can't see causes for them from either the schematic or datasheet, but there are some possible issues with prototyping/testing this that I'd raise:

Sorry if you have already considered all of these, but they are worth raising.

Given that the linearity seems to improve with increasing frequency, this is also suggestive of an issue with bypassing.

The ripple on the bypass caps is a form of rectified signal. I suspect that some of this is leaking into the signal path, possibly via Vr. Have you bypassed Vr to only one supply rail? Adding some half-wave rectified signal could explain your problem.

This is sort of like crossover distortion, you can reduce / remove it by loading the output so that the output is always sourcing / sinking current and so all the ripple current comes from the positive / negative supply bypass cap. This is probably why the linearity improves when you load the output. With enough loading all the current comes from one bypass cap so the current drawn from the op amp isn't rectified and so there is no non-linear signal to cause your non-linearity. The undesired coupling to the power supplies is still there, it's just that the coupled signal is linear.

Edit #2: Re your comment: Also noting that the op-amp is running from a single 2.5V supply with a bypass cap very close to the op-amp between the supply rails This is probably your problem - you haven't provided a path for the signal current to get back to the source. You need substantial bypassing from each op amp supply pin to the ground of the signal source. There is of the order of a mA of signal current, and unless you provide a low impedance path from the op amp supply pins to the ground of the signal source, it is probably meandering it's way back through various ground leads. Worse still, half-wave rectified versions of it are probably getting lost differently! This is why I said originally to think very carefully about the return path for the signal currents.

I've tried to illustrate the return currents on this schematic:

I don't know if I have your bypassing arrangement correct.

You can see (hopefully) that in this circuit that you are relying on the bypass capacitor Cbp to reduce the modulation of V+ by the signal current when Vs < Vr. Any modulation on V+ will modulate Vr. If the signal voltage (Vs) swings either side of Vr then the modulation on V+ becomes non-linear. Increasing Vr until it is past the peak of the signal will stop the non-linear feedback (only the upper diode will conduct), but the feedback will will still be there - changing the output levels. Similarly for adding a pull-down or pull-up resistor to the output - this can stop the non-linear effects by ensuring only one of the virtual diodes conducts.

I don't have your circuit in front of me to test out, but this is a feasible explanation of your problems. It is consistent with the variation with setting of Vr, variation with output loading and the reduced effect as you increase frequency. Of course it may not be this - but a good design would eliminate this as a possibility. Try increasing Cbp or add extra filtering to the Vr line. Ideally I'd also prefer to see you lower the impedance of Vr, especially since you are feeding it off to the oscilloscope.

-. "Virtual ground" must be established in order to apply the sophisticated theory of operation.
-. There is no physical connection between two input pins.
-. What makes the virtual is the OPA output fed back to the input, driven to balance two input signals.

Hugo, search "Open-loop output impedance" in the datasheet, which is 2k ohm for OPA330. It is not a static value, I think. Though, it is a good reference.
Thus, when the OPA is in it's maximum effort to pull the Vi- input pin down while the signal source is at 10V, the output can reach only to (10V * 2K) / (10K + 2K) = 1.6V. Meantime, output can only swing about 100mV near the rail. Besides, there is a possibility the equivalent output impedance grows near the rail.The same principle applies when the output has to swing up hard, when the reference is set high.

Now, you can tell "Aha!", I guess. The solutions you have found were:
a) Shift the reference. This puts the "balancing point" of input pins inside the "circuit output" range.
b) Pull down the output. This bleeds the current from the signal source (10V), and shifts the output lower.

Not the answer you're looking for? Browse other questions tagged operational-amplifier circuit-analysis inverting-amplifier or ask your own question.