Ok this is probably a basic question, but I understand how SR latches work except one thing.

I assume it's Zero.....but with the very first clock signal (To R or S)....it hasn't gotten the output line from the other OR gate yet...so how can it get a first output.

Like lets pretend the first clock signal is R=1 and S=0 ....what about the R or gates input line next to it (that relies on the S OR gates output).....how can it get this on the first "input" signal. It confuses me?

Do we just assume it's zero or what?

edit: Since the question is confusing, the Input line RIGHT below the R (They both go into the top OR gate, im talking about the one right below it). Since it is dependent on the S output....if it's the first "Clock" signal...what would it be set to? Zero? Since obviously it has to wait for the output of S before it can actually be set to anything...but initially what is it considered.

They start out undefined, that is they could be set to either.

When you switch power on, assuming a real latch with no input signals, both gates will want to output high. However due to no two gates being exactly the same (and other real world effects), one will "win" the race to bring it's output high first, and set the others output to low. The same gate may not win every time, so you can't predict the state at power on.

This diagram (from the second link below) helps to visulalise things: 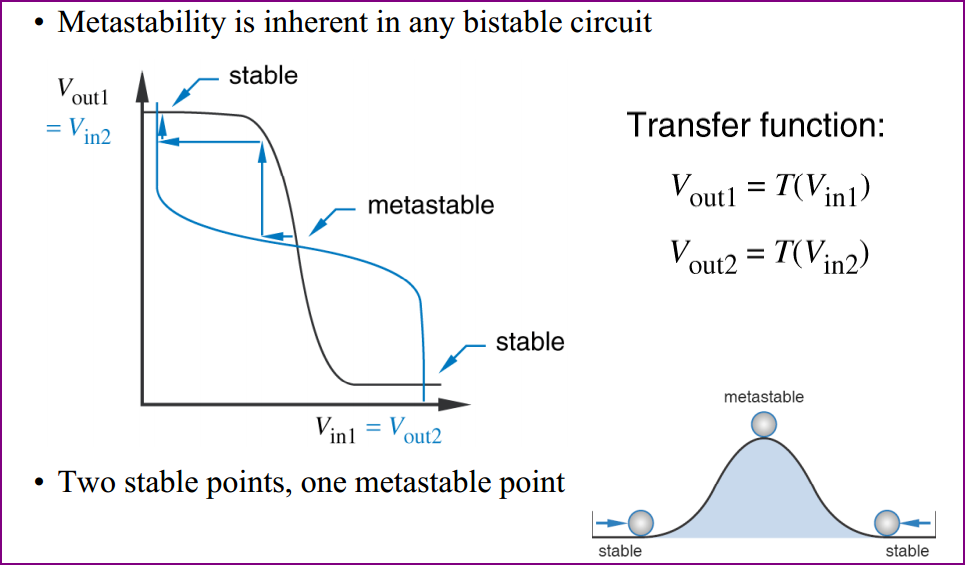 For further reading about this and metastability, see these links:

That's the thing with memory devices like flip flops -- you need to initialize them. You can't assume anything about the startup state. If its important to the functionality of your circuit, your power on routine must assert one of the inputs to guarantee a known state.

4
Gate Logic Initial States?
2
Is there a latch / flip-flop with this behaviour?
3
PRESET and CLEAR in a D Flip Flop
1
Flip-Flop Made with 74xx Chips not Latching Consistently
2
Difference between latch and flip-flop
0
SR latch conventions
0
Question about SR latch timing
0
Which is better latches or flip flop
0
Modification to the D flip-flop
0
SR Flip-flop logic