Help understanding a motor control circuit for a lathe

I have a lathe with a 1.5 hp 220VAC motor, built in the late 1980s in Taiwan. For lathes of this vintage, a "normal" motor control circuit consists of a couple switches (for forward/reverse), a couple contactors, and a 24VAC transformer to run the contactor coils. This lathe, however, is different: 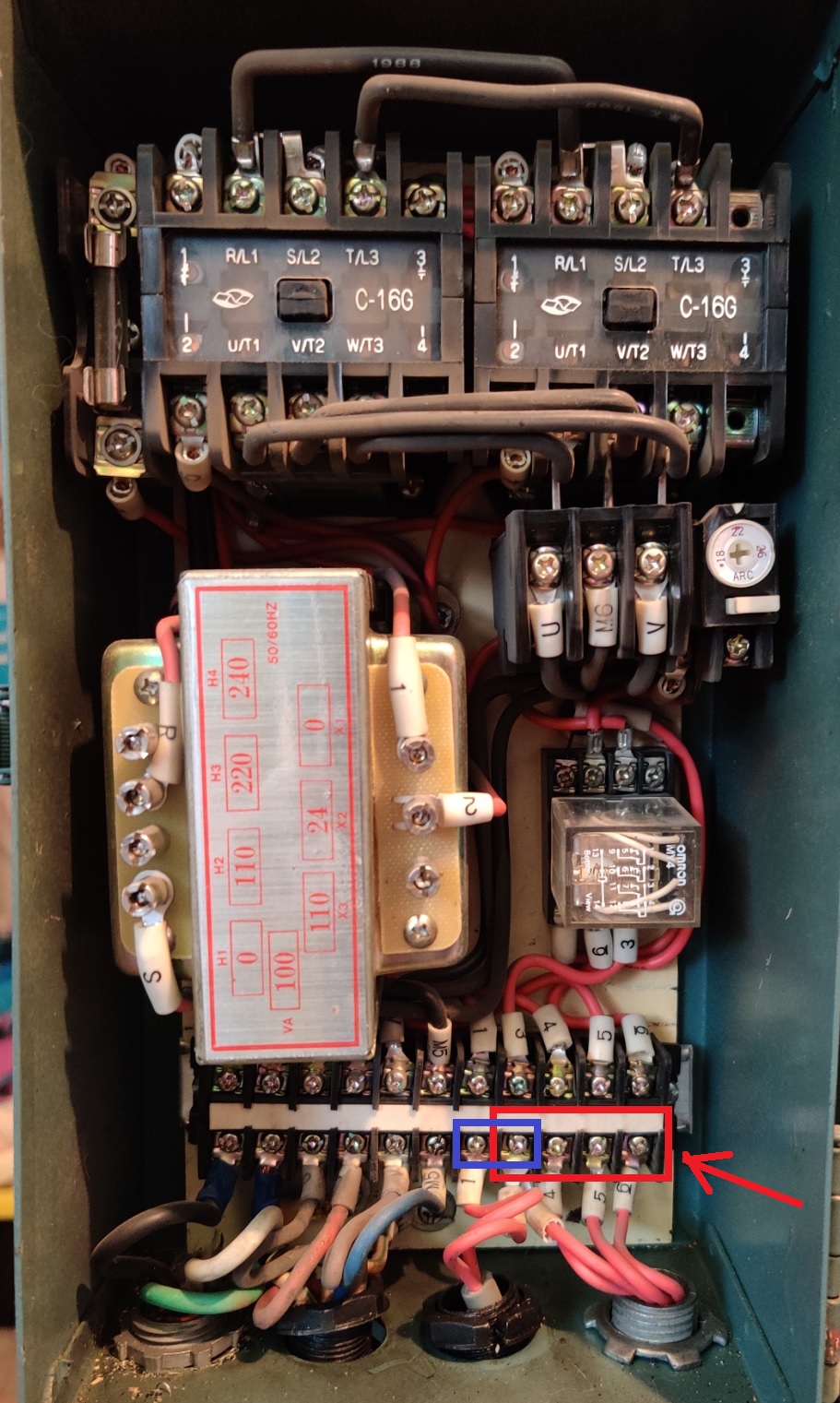 I have the normal 2 contactors, plus a circuit breaker (I believe these are referred to as "OL relays" or "overload relays"?), the 240VAC->24VAC transformer, and the bit that I don't understand: a small Omron MY4 24VDC relay. Buried under the terminals at the top of the relay is a small rectifier that takes the 24VAC from the transformer and produces DC(-ish) from it to run the relay. I can't find any other lathe wiring diagram anywhere that resembles this setup, and the manufacturer is long gone.

When I acquired this lathe, the fwd/rev switch (connected to the 4 wires labeled #3, #4, #5, #6 and circled in the above image in red) were disconnected, and presumably, the switch was faulty (the original owner had passed away, so I couldn't ask). I am operating under the assumption that if I wire up a new switch correctly, the lathe will operate.

I have worked out enough of the wiring diagram to conclude that the only way the Omron relay will be energized is by connecting #3-#6 at the fwd/rev switch. The thing I don't really get is why the relay is set up to "latch" itself; once it's on, it'd stay on until the e-stop was triggered (the e-stop switch is wired to #1 and #4, circled in blue above). This arrangement I do not understand at all. 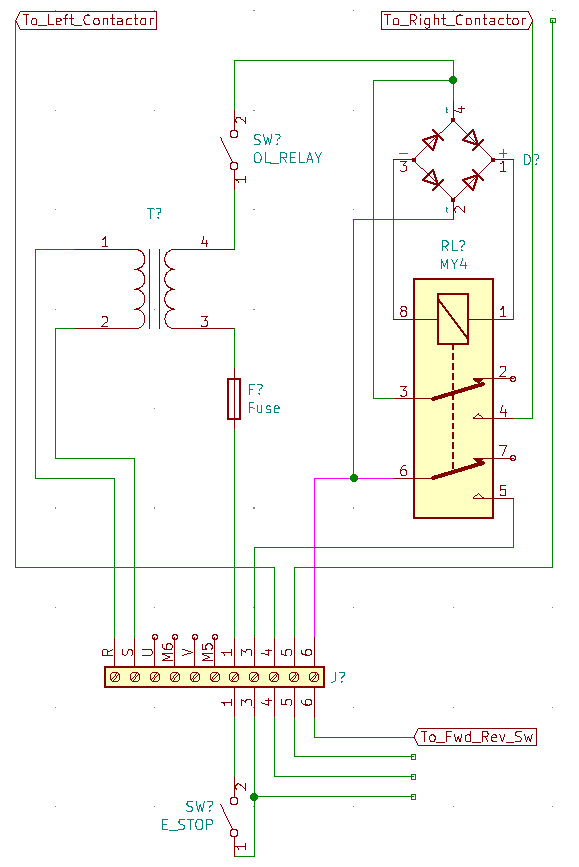 The fwd/rev switch is a "barrel" switch with the extremely imaginative part number "15A PN-1". There are 8 terminals on it, but because the switch was already disconnected when I bought the lathe, I have no way to know how it was connected. One interesting fact, however, is that there is a small jumper wire between two of the terminals (2 on one side to 4 on the other side). Other than that, I don't know why it's there or what two wires it would have connected. 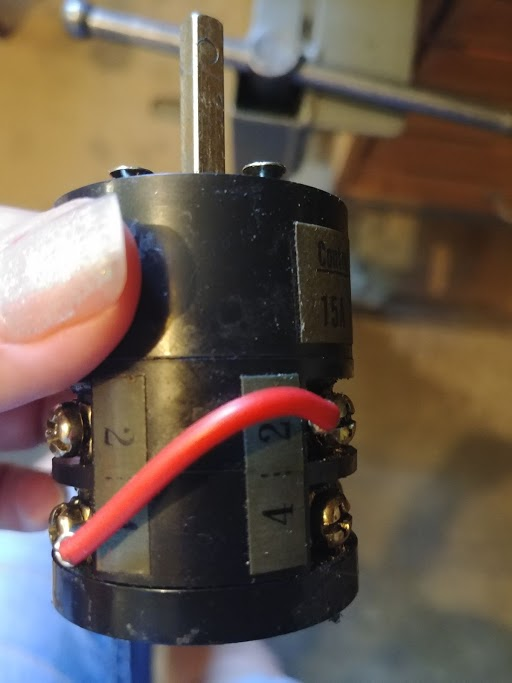 For those interested in the motor, here is the nameplate: 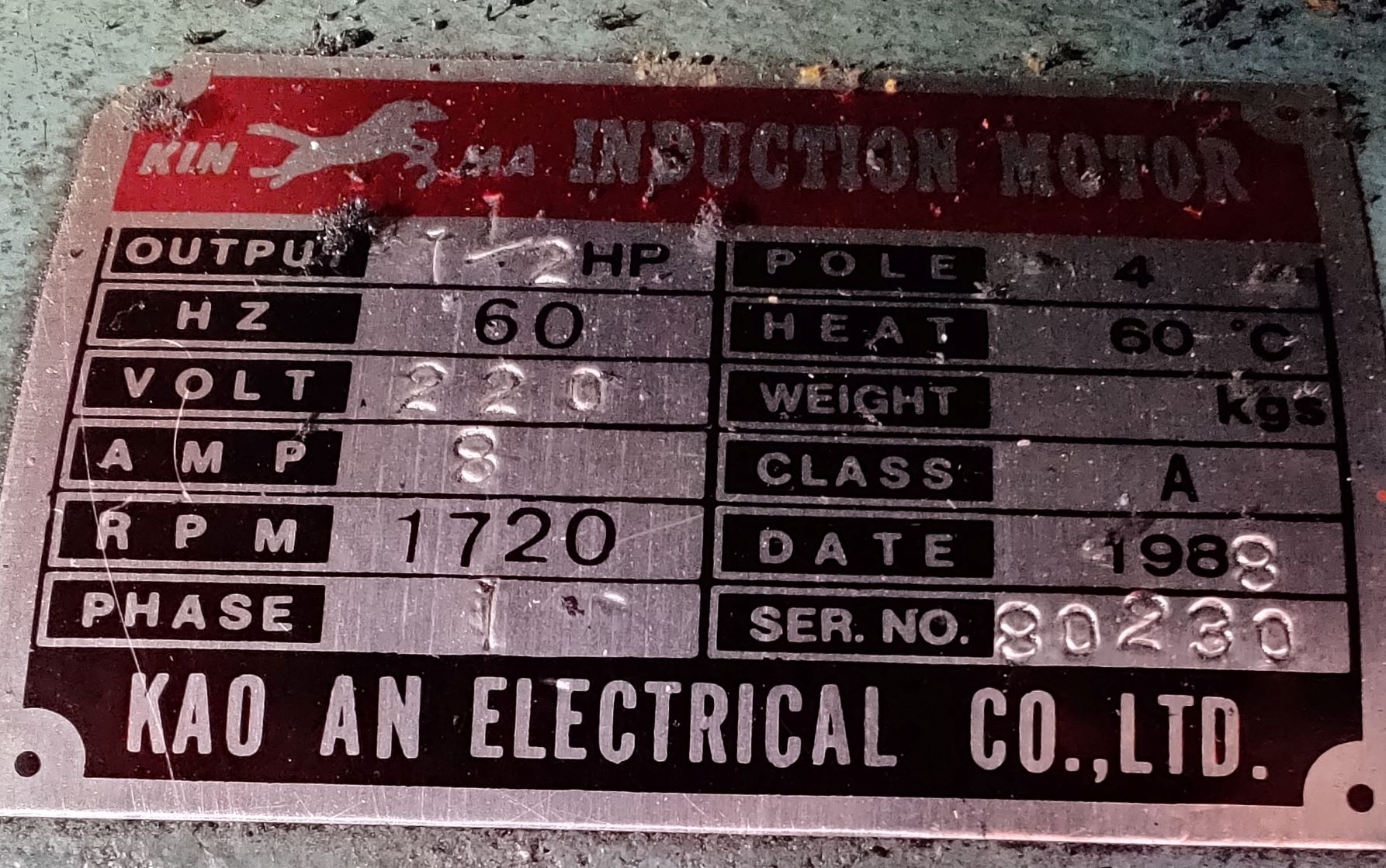 I just worked up the courage to momentarily jump wires #3 and #6 (as labelled in the schematic), and I found that as long as I don't hit the e-stop or unplug the lathe, everything works as expected. This means that my schematic is probably at least mostly correct (as much of it is there, anyway), and the contactors and relays are working correctly.

Is this setup familiar enough to anyone that they could work out how the switch should be set up?

I'm not sure about your schematic. But in any case you want to design so that you won't change motor direction when under power, so make your switch/relay logic so that the power to both contactors is disconnected if you try to change directions when the motor is energized. Possibly your original switch had to pass through a de-energizing state when going from forward to reverse.

Since you have verified a single-phase motor with a capacitor, the motor will be wired as follows: 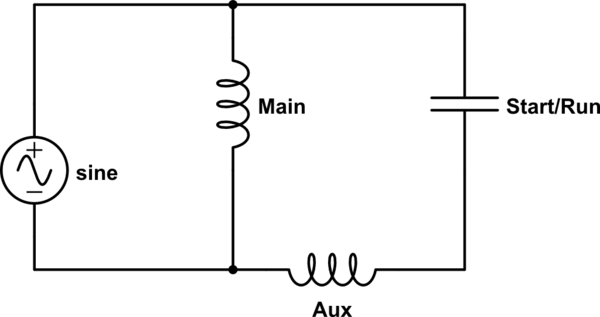 What you must do is to reverse the auxiliary winding, which will cause the motor to run backwards.

It appears to be a split-phase motor, wired as shown, with its direction of

The DPDT reversing switch is to be be wired as shown below.

The purpose of the jumper is to interconnect the 2 poles (connected to terminal 6).

Not the answer you're looking for? Browse other questions tagged motor relay lathe or ask your own question.