Cause of LED burn

When I connected an LED to a 3.7 volt mobile battery, the LED started to burn inside with a smell. Even though it lit, there was a burning sound. What might be the cause? Please explain.

You applied too much voltage to the LED, which caused excessive current, which caused it to burn up. Check the datasheet. How much current does the LED want?

A simple way to limit the current is to put a resistor in series with the LED:

I used the first common value above that, which is 82 Ω. You can use a higher resistance if you don't need the full brightness, and a different value will be needed for other than a typical green LED. Red usually drops around 1.8 V, for example. Check the LED datasheet.

The most likely cause of an LED burning is that you supplied too much current to the LED. This can easily happen if:

Most 5mm LEDs can handle about 20 mA. You need to include a resistor that limits the current to that value 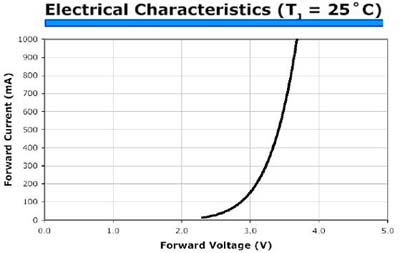 The following is a current voltage graph of a typical LED. Unlike resistors, which have a linear voltage current relationship, LEDs have an exponential relationship. Which means that after a certain voltage (operation voltage is typically round 2V for small LEDs), the current increases greatly for just a small further increase in voltage.

High current, in itself, for most electronic components is not a problem including LEDs. The problem is the heat .i.e. the component generates a lot of power which it cannot lose to the air around it fast enough, and starts to get hot. For the first few moments the temperature is still low and everything is fine. But if the condition continues the temperature gets high enough to fry the component.

The way we solve this is as Olin mentioned, is to solve by assuming that the voltage drop on the LED is the operation voltage and it is consuming its operating current. The remaining voltage we want to lose to a resistor at this current.

For sake of completeness, you can also use a constant current source, or a current limiter. These devices work by directly supplying (or limiting) the correct current for an LED rather than using a set resistor and relying on ohms law to limit the resistor.

For a few small LED driven from a fixed voltage it's a bit over-kill, but they're useful if you have a large set of LED's you want to drive, or if you want to be able to precisely tune the brightness/current of an LED, particularly larger high-power LEDs.

These devices come in several varieties, from some which act similar to a variable resistor with negative feedback control to others which are switch-mode and will "pulse" an on/off signal at high speeds.

Whichever method you choose, just make sure you aren't providing too much current to the LED.

6
What happens to my LED when I supply too much current?

0
9v battery to parallel 3v LEDs - burnout
0
How to Hook-up an LED-Lit Rocker Switch with 115V AC Power W/o Blowing the LED?
0
Led circuit problem
3
LED circuit and resistor recommendations
0
10 Watt LED and LED Driver related question
4
LED still glowing with a capacitor in series
0
Burned out potentiometer
0
How to power 12V fan and 3V LED with a 9V battery?
1
Why do different resistors of the same power rating burn out / not burn out?