I'm working on a phase angle controlled TRIAC dimming circuit (schematic attached below), and I'm seeing a lot of ripple/noise on the 120 VAC input as I near 50% power. I'm wondering what I can do in my circuit to possibly clean the line to reduce or remove the ripple, and I'm open to any other improvements that might be suggested. Powering the induction motor is introducing line noise and appears to be impacting the zero cross detection circuit's signal where I'm starting to see phantom ZC pulses in the arduino, presumably from sub-harmonics on the now noisy signal.

I'm building this project to learn more about electronics which is why I've opted to design the circuit instead of purchasing things like zero cross modules and off-the-shelf SCR units. As such I'm wondering what other's would do to the current schematic to improve it's robustness/durability/etc.

The circuit is powering an Ametek 116765 vacuum motor, rated up to 13A peak current draw. I haven't taken the motor above 35% power yet, but so far it runs smoothly from 0 to 35% power.

The TRIAC is a snubberless design, and I don't seem to have any problems with latching the TRIAC so I've not included a snubber.

Here's a capture of the TRIAC (green) running at 35%. You can see the amount of ripple on the AC line. It also overshoots the zero cross, but I've read that it shuts off at zero current not zero voltage which is why you'd see that. I believe that's fine, but if there's an improvement to be made I'm open to suggestions. 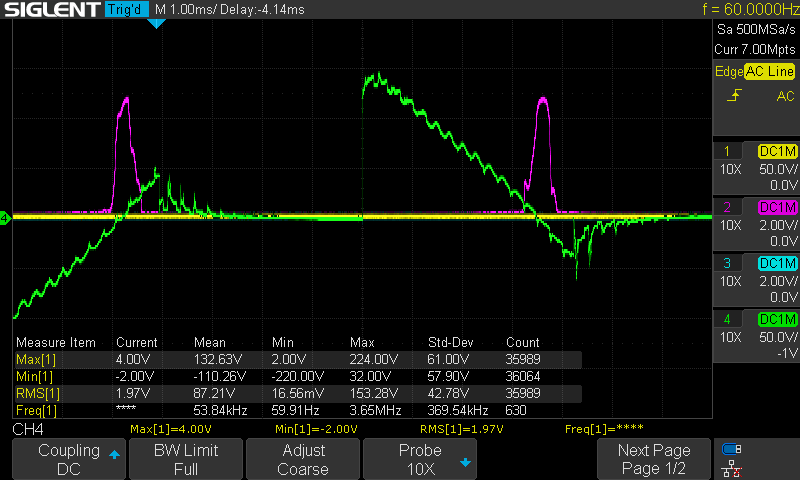 Here's the impact on the AC (yellow) as it enters the circuit. You can see a voltage dip as the motor kicks on. (Note: that blip at the peak just before the voltage dip appears to always be there, even under no load...) 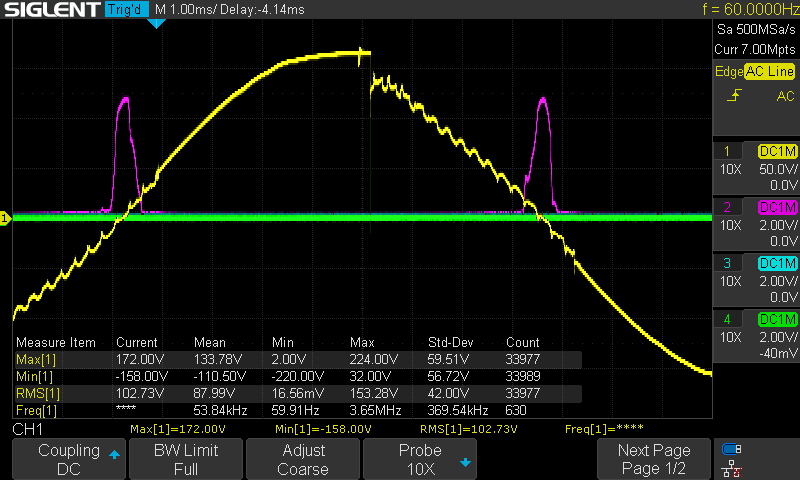 Here's a closer look at the impact on the zero cross pulse. Under no load it's a nice bell curve. 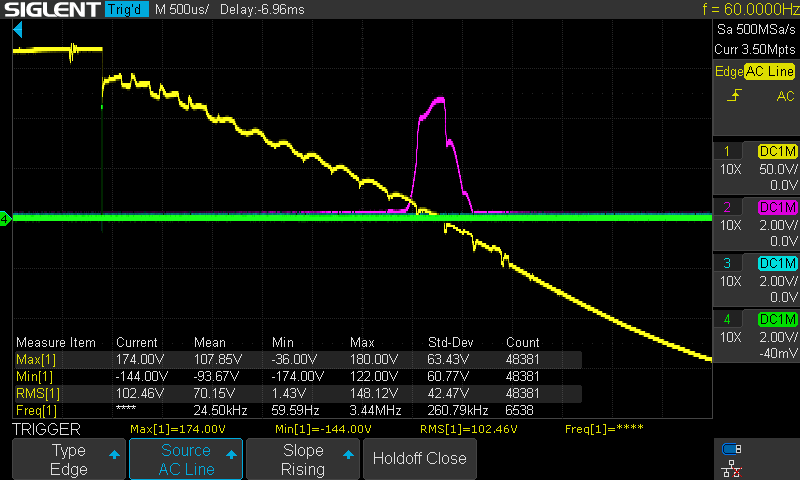 I've added a snubber to the circuit based on the suggestions of the several folks who responded, and to my eyes it has no apparent impact on the voltage spike we're seeing. Below are 4 different snubber setups and their corresponding captures. Also, I'm following the layout discussed in the opto's datasheet described in figure 12 show here: 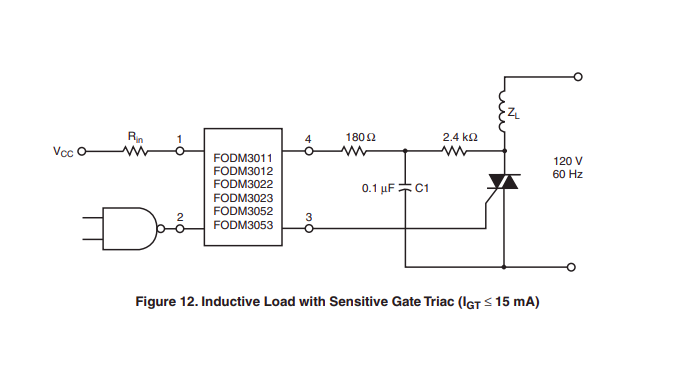 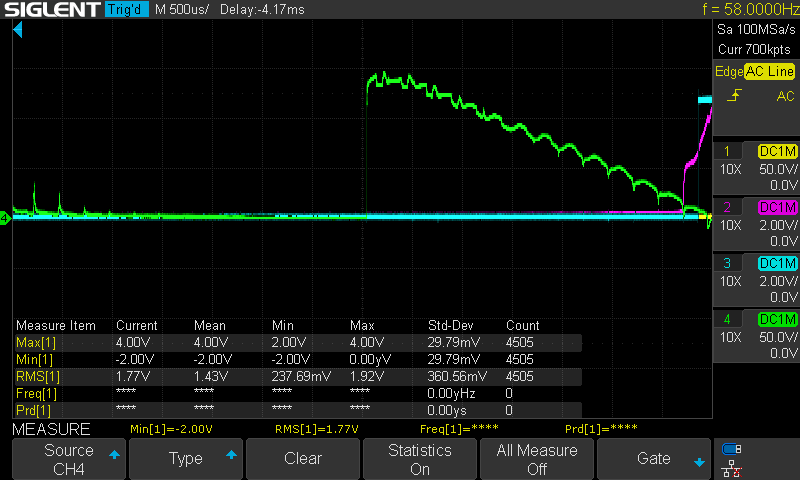 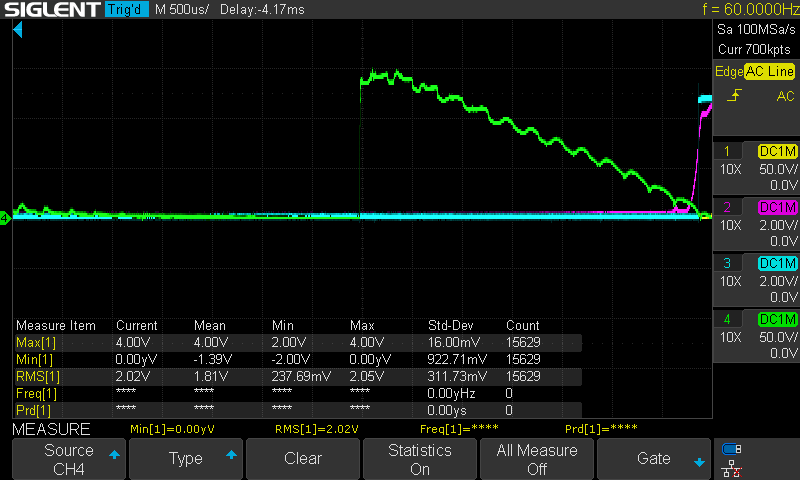 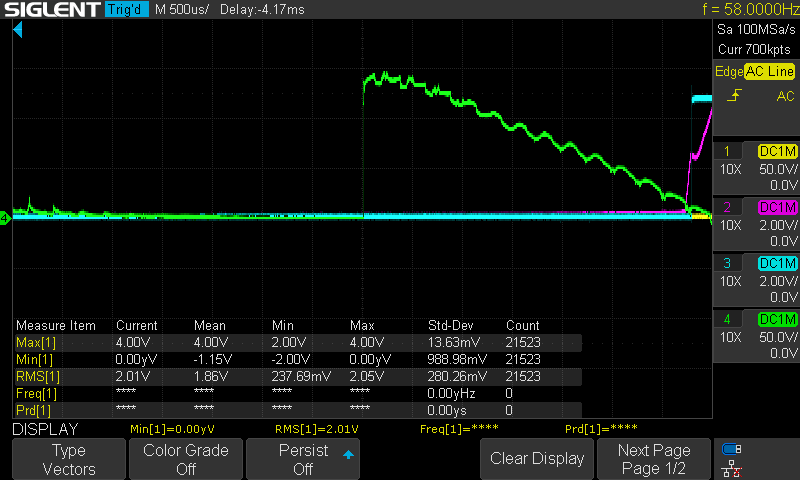 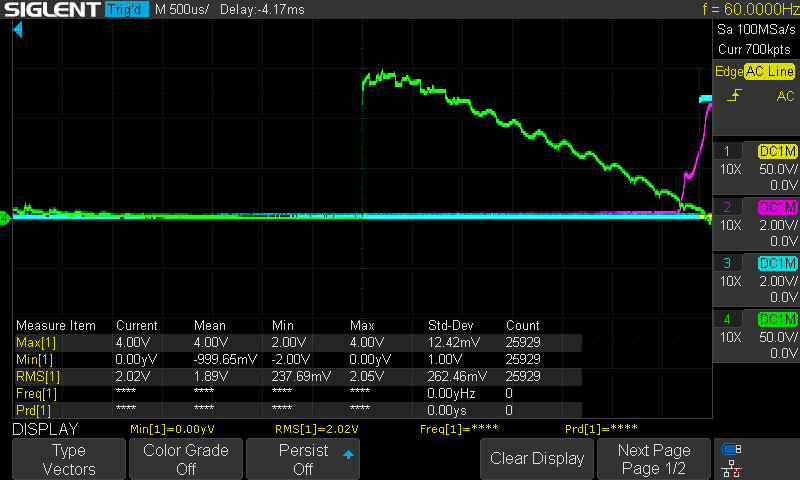 From what I'm seeing, there's a few potential outcomes:

My suspicion is that the motor in question is not an induction motor but rather a universal type with brushes. This would account for the ripple you observe. I’d suggest you add a snubber as it cleans up high voltage spikes that will slowly kill your opto. You might want to add some filtering to your zero cross circuit to take care of random transients causing a fake ZC to be drtected.

[further info] I suggested connecting the motor directly to the mains to verify that it is indeed the motor creating the ripple. If there is any doubt about the contribution of the triac circuit to this ripple, then the test will demonstrate this.

Is the ripple to be expected with a brushed motor? Yes. The ripple should be a multiple of the motor speed. Should you be concerned? For a one off hobby project, you could probably ignore it. For a product unit, you'd want to filter it for compliance reasons.

How to filter it? Not something I've had direct experience with, that's why I suggested looking at consumer gear that has similar motors. You could probably 'dumpster dive' and get a disposed of vacuum cleaner and harvest the required items as well as observing what the manufacturer did to address the problem. Many modern vacuum cleaners have a speed control, so that is extra learning you could extract.

As for filtering the ZX signal, it is easier on the output of the opto. As mentioned, there are plenty of examples of ZX detectors on the interwebs. Some better than others. I used to design lighting control systems, so glitches on the ZX would cause blinks and flashes on the lighting - which is what I wanted to avoid. A vacuum motor cares less for such things.

Not the answer you're looking for? Browse other questions tagged motor-controller triac dimmer zero-crossing education or ask your own question.