Why does the number of holes in an N-type semiconductor increase with temperature?

I was watching this video. 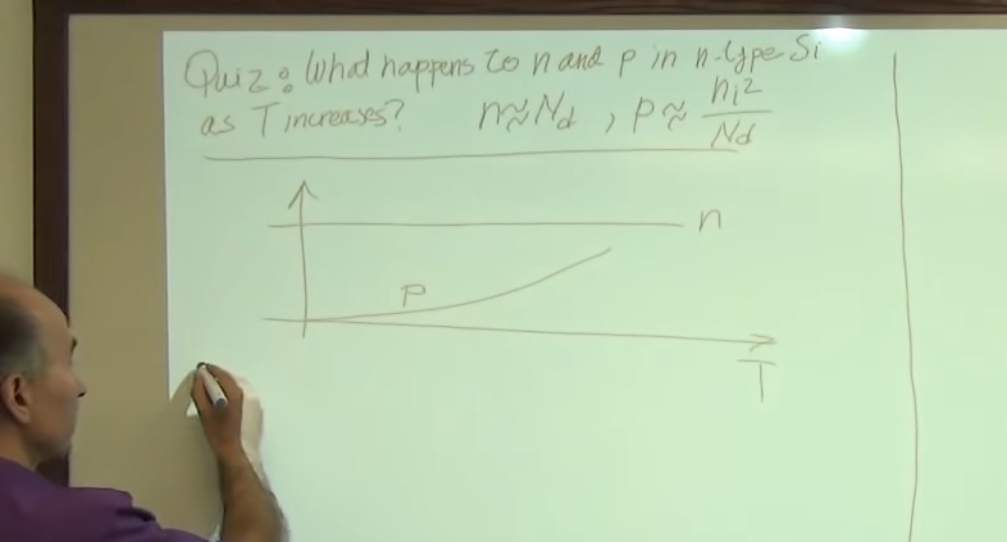 I understand that the dopant atoms introduce huge numbers of free electrons that essentially overshadow any additional electrons that break free due to higher temperatures.

What I don’t understand is why the hole concentration increases. Surely, since we have so many free electrons, any additional holes that are created due to higher temperatures should get instantly filled by the large number of electrons. Hence, shouldn’t P remain constant?

point is: nothing is ever instant. Nothing: So, while the number of free charge carriers of poth polarities increases, and so do the recombinations, the number of available ones at every point in time increases just as well.

This is dynamic; pairs are being formed and get broken. But to understand, we take the net effect, i.e., 'the number of pairs generated - pairs broken'. So, when more pairs are broken than generated, we say free electrons and holes are produced.

The energy required to break electron free out of atom decreases with temperature. Thus at higher temperatures it's harder for an atom to bound to a free electron.

First, we should understand how the carrier concentration varies with temperature in an intrinsic (pure) semiconductor.

At zero Kelvin (absolute zero), there are no free carriers in the semiconductor. In the 'bond model', this means that all the electrons are bound to the atom, as there is no energy available to break the bond. In the band-diagram, this is equivalent to the condition where all the electrons are residing in the valence band, no free electrons are in the conduction band.

As the temperature increases, the thermal energy increases, a few electrons attain enough energy to jump from the conduction band to the valence band (or to break free from the atom). As the temperature further increases, the thermal energy increases and the free carriers also increase (both electrons and holes, equally). This increase in intrinsic carrier concentration (\$n_i\$) is exponential in nature. (see image below). This increase in electron and hole concentrations happen even in doped semiconductors. (This is what is shown in the question). 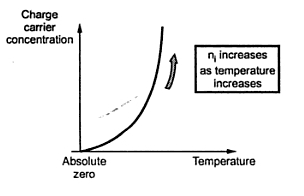 NB: This is one of the reasons why semiconductors have an upper limit on operating temperature.

Not the answer you're looking for? Browse other questions tagged semiconductors or ask your own question.