Is this video fake? I thought Tesla coils only worked on AC

This video shows a 9-volt battery is connected to a wire as a primary.

The first reason I think this is fake is that he is powering a Tesla coil with 10 volts.

The second reason is that Tesla coils work on AC, or at least I thought so, and he wouldn't be able to step the voltage up to high because a transformer only works on AC and the battery provides DC. 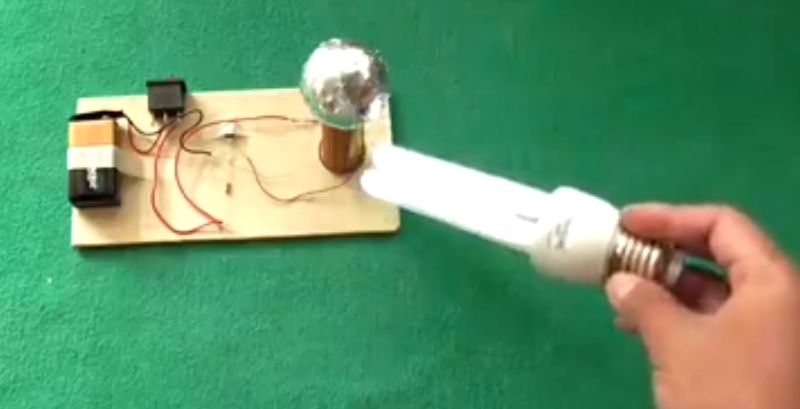 ... and a transistor, and a resistor.

This is the simplest SSTC (Solid State Tesla Coil) I've seen. The transistor chops the incoming DC power supply so that it's changing at the primary. It takes feedback from the secondary, so that it oscillates at the resonant frequency of the secondary inductance and its self capacitance.

Drawing the circuit from the video (I might make one myself for the lols), we get this

I'm not absolutely certain I have the transformer 'dotting' correct, but I think I have interpreted it correctly from the video. If it fails to work, swap the orientation of one of the coils. Eye-balling the coils, I'd guess at 32 mm x 100 mm and 200 turns = 350 µH for the secondary, and 35 mm x 3 turns = 690 nH for the primary, coupling in the 0.1 to 0.2 ballpark.

When power is switched on, the transistor is biassed as an amplifier by R1. It's quite a large value, so the base current is small, and the collector current is similarly small enough that the transistor doesn't draw too much current for the battery or let out smoke.

If you run this in a simulator, that might be all that happens until you give it a kick. In real life there's noise in the circuit, and this noise will be amplified by the transistor. This will cause a variation in the collector current, which will induce a voltage in the secondary. This voltage will drive a current into the circuit consisting of the transistor base and the coil self capacitance. If the transformer is connected the correct way round, the effect will be to reinforce the change and drive it further.

Once started, the timing of these reversals is dominated by the resonance of the secondary with its self capacitance.

As @Hearth points out in comments, it's basically a Joule thief, or blocking oscillator circuit.

A combination of low input power and the 2N2222 being fairly tough allows this to keep working without blowing it up from overvoltage on the collector or base. More input voltage or a more fragile transistor would not work, at least not beyond the first few cycles.

I like circuits that are as simple as possible. If I'd started to design this, I'd probably ground the secondary with a pair of anti-parallel diodes, so that the discharge current is kept out of the transistor base, and then have to connect the feedback to the base. However, the capacitance of these diodes would change the phase shift and gain, and it may not start, and would use more components ... sigh! Perhaps it's worth the risk of killing a 2N2222 for the simplicity. Maybe just one little signal diode between base and emitter as shown to prevent VBE reverse bias. I'm sure that would not stop oscillation.

So its real. Could you explain it a bit simpler please?

A similar type of circuit is used in gasoline engines so that the 12V alternator can produce a high voltage spark to ignite the fuel/oil mixture. See https://en.wikipedia.org/wiki/Ignition_coil for more information.

A transformer does not need alternating current (positive-zero-negative-zero repeated indefinitely) but only requires that the voltage change with time. If you run DC power through the primary coil, it will store energy in the transformer, but no power will come from the secondary. If you suddenly cut the power to the primary, you have a very high rate of change of voltage (difference of voltage divided by unit of time) in the primary, resulting in a high voltage spike at the secondary. If you want more details, the Wikipedia article appears to be a good source.

Not the answer you're looking for? Browse other questions tagged transformer high-voltage inductance tesla-coil or ask your own question.

4
Inductive "kick" and possible dangerous experiment
2
MOT Power supply issues
12
How are neon sign transformers built?
0
convert step down to step up transformer?
5
Can a Tesla coil's secondary wiring overlap?
2
Can the primary coil of a Tesla coil be inside the secondary coil?
0
Slayer exciter not working
1
Will a Tesla coil work with a square wave inverter output, used as input?
2
What makes Tesla coils better than conventional transformers at generating high voltages?