I'm building a Digital Clock controlled by a Arduino micro-controller. I want it to display the hours, minutes and seconds on a LED Digit Display. Therefore, I need to have several digits, preferably 6 that are all linked together meaning as one piece and can be used on a breadboard.

1.) Since there are several models and that I'm just a beginner (student) I need advice on what model I will need that I can put on a breadboard. I can find single digit displays at Radio Shack which i've already used in building a simple counter that goes from 0 to 9. However, I need a display with at least 6 digits. Therefore, what Model# would you suggest and where could I order this online.

6-digit 7-segment displays are not very common: Single, 2, 3 and 4 digit modules are much more easily sourced.

Here is one 6-digit 7-segment intelligent display module that can be bought as a kit or fully built - it actually consists of two 3-digit displays on a single PCB, with a serial interface: 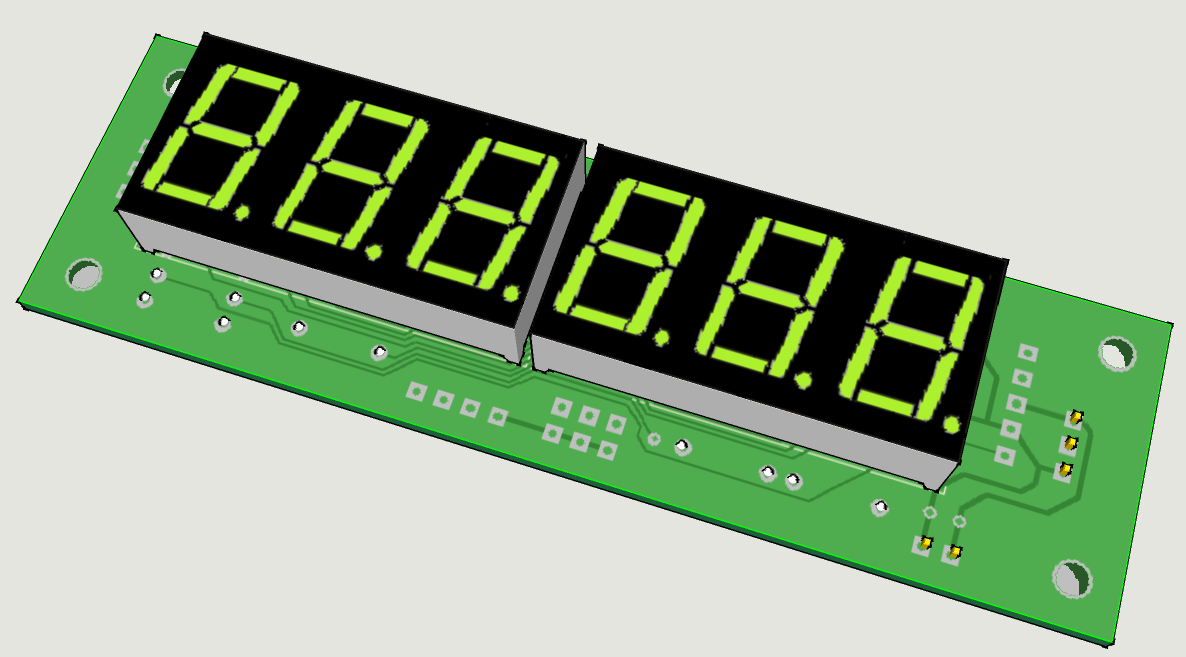 Alternatively, consider using a 4-digit module with a colon indicator midway (e.g. from SparkFun) and tack on a smaller-sized 2-digit display module for the seconds. 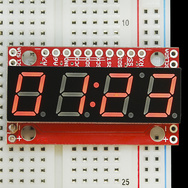 Modules like the one above are more suitable for a clock than regular 7-segment displays anyway, with the hours and minutes separated by the colon.

Using a smaller seconds display module will increase readability of your clock as well.

Try to choose Common Anode type displays because with your microcontroller type it is easier to sink current than source it.

There are multiplexed displays available try to then those as you don't have to wire them yourself.

Usually the multiplexed displays are available in 4 digits. Here are a few of them available at Mouser:

BTW, unless you want to learn, there are other simpler to wire clock projects available. I just found one today. It uses an AVR. 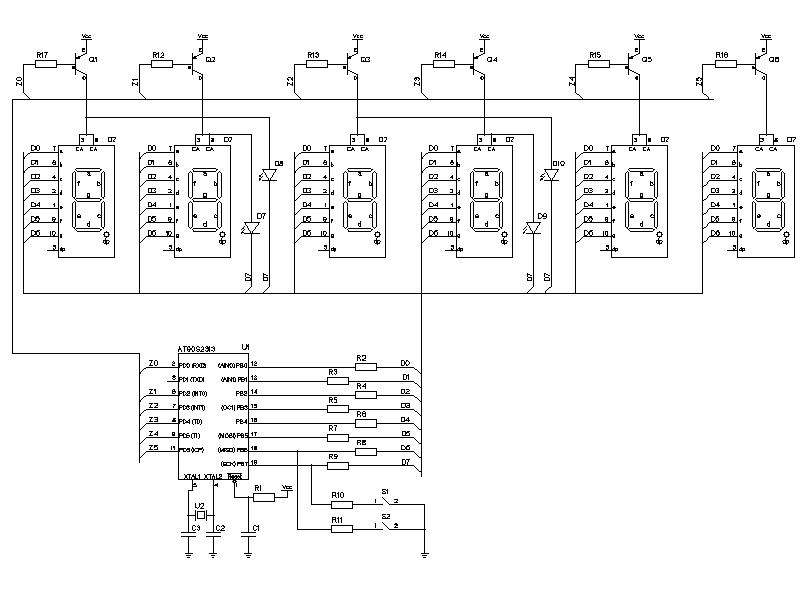 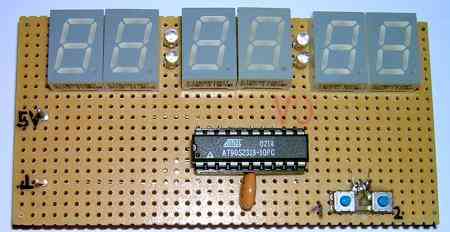 Typically you can get six individual digits and just put them next to each other. You can drive them each in turn by switching the common cathode of each in turn.

A reputable supplier of components will often provide the datasheets for free on their website.

There are a few others, too. Another good place to check for datasheets is on the manufacturer's websites. There are also datasheet catalogs which have links to many different datasheets, for example Datasheet Catalog. Personally I don't use these too much because the suppliers/manufacturer websites are often times much easier to parametrically search for the part I want.

As far as driving the LED displays go, the most efficient pin-wise is to use some sort of multiplexing scheme and rapidly flickering between digits that it appears like all digits are on at the same time. This question deals with a 4-digit 7-segment display which uses a multiplexing scheme.

Semi-shameless plug, I recently published a blog post on how to drive a simple 4-digit multiplexed 7-segment LED display.

Here's the schematic for the board (ignore the very ugly PNP transistor symbol, the library file I have is quite terrible): 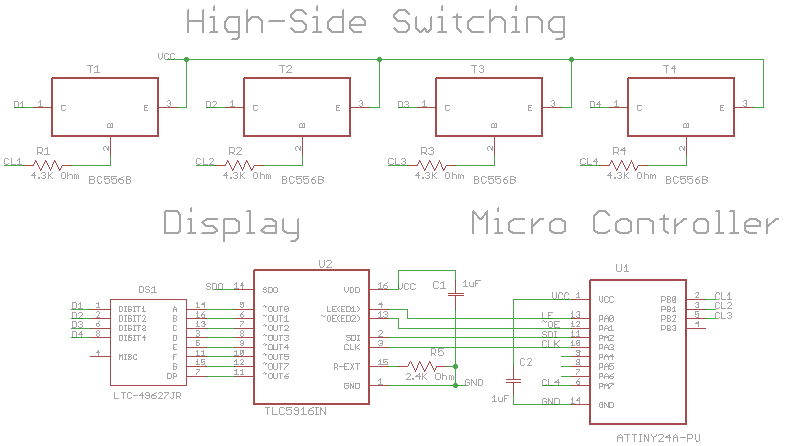 Basically, I'm using a shift register designed for driving multiple LEDs since the micro-controller by itself can't reliably source/sink the necessary current required by all the LEDs. The shift registers control the sink (current flows into the sink), which determines which segments are on. The current is sourced through a PNP transistor. Each PNP transistor determines which digit is on at any given point and time, ideally only one is on at a time. The code I posted quickly cycles through each digit to give the illusion that they are all on at the same time.

Also, the part I was using had all 4 digits plus a little more integrated together, but you can just as easily get multiple single digit 7-segment (or 14-segment) LED displays and wire them up equivalently.

As a side note, I'm driving my circuit directly using a microcontroller without an Arduino (the one pictured is just doubling as my cheap power supply and programmer), but you can just as easily drive the circuitry using the Arduino platform.

Old question, I know, however think this might be a good and easy start. Take a look at the KEY&LED modules, very nice, integrates buttons, simple to use and only requires 3 wires. Can also used on a breadboard with some dupont wires if you want to. Wrote a library for it (fastest around) and also includes a clock example (example #2 of #5), a pretty good start to make your own clock. You can find it on github:

Here a photo of one of the cheapests modules around: 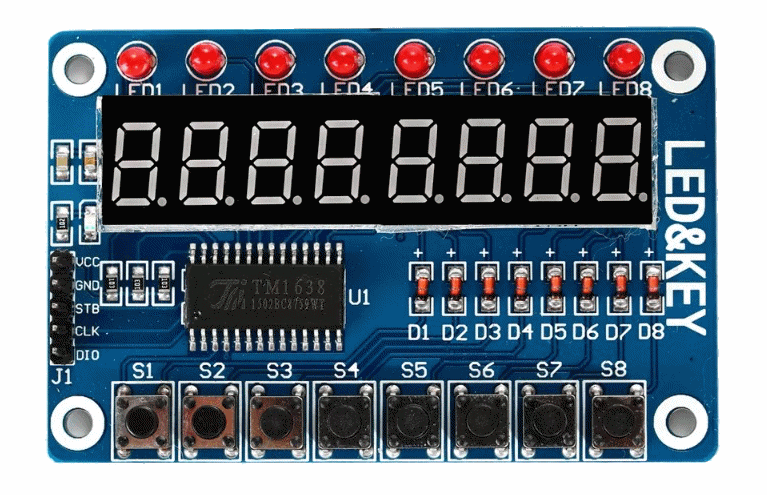 The controller TM1638 is very frequently used in set-top boxes, dvd-players and such. Take it apart before throwing away and reuse these front panels, it is pretty straight forward and educational too. You can also keep the plastics of the front panel and could be a good start for designing/completing a (custom) case.

Not the answer you're looking for? Browse other questions tagged arduino led 7segmentdisplay or ask your own question.