Can the Common Emmiter Amplifier use a PNP Transistor instead?

This is a simple Class A amplifier using an NPN transistor:

Is there a way this can use a PNP transistor, instead (with only 0V and +Vcc, not 0V and -Vcc)? Why or why not?

Any amplifier that can be made with an NPN BJT can also be made with a PNP. Whether its inverting or not really depends on how the output is interpreted. More on that later. 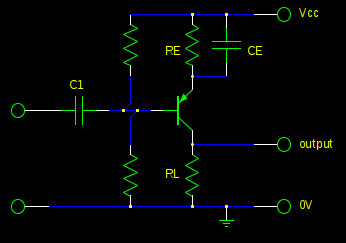 Equivalently, you can just swap the NPN transistor for a PNP transistor, and replace +Vcc with -Vcc. However, the convention is to draw schematics with higher voltages at the top, so the resulting schematic would look a bit funny.

If we call the highest voltage in the circuit "ground", then we can have negative voltages. Or, we can call the lowest voltage "ground" and have positive voltages. We can even pick a voltage in the middle and have both. Or, we can ignore ground altogether and talk about the voltage "drop" or "across" a component or between any two points in the circuit.

This is the same circuit, just with a different notion of "ground", which is completely irrelevant to the operation of the circuit, only our discussion of it: 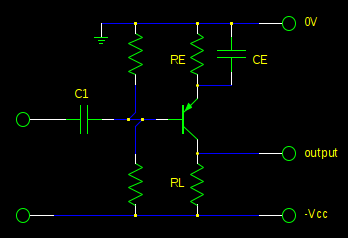 Really, the terminal labeled "output" is a voltage somewhere between the other two terminals. Is it inverting? Well, are we considering the signal to be the output relative to the higher voltage at the top, or the lower voltage at the bottom?

Let's get rid of the names which the electricity doesn't know about, and draw the whole circuit, with a power supply and all: 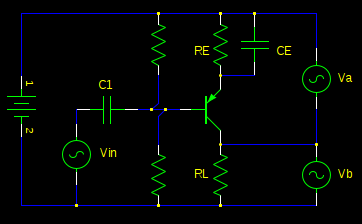 There is no "ground" and there is no "Vcc"; there's just a battery with two terminals, one with a higher potential than the other. We can call them what we like; the circuit doesn't care, as long as there's that voltage difference there.

There is also no "output" terminal, but instead we have two voltage differences, either of which could be considered the "output": \$V_a\$ and \$V_b\$.

When the input \$V_{in}\$ is low, this forward-biases the transistors base-emitter junction more, turning it on more, making it effectively look like a smaller resistor and allowing more current in \$R_L\$. By Ohm's law, if the current over a resistor increases, so too will the voltage across it. Or, you can think of \$R_L\$ and the transistor as making a voltage divider. Either way, you can see than when \$V_{in}\$ goes down, \$V_b\$ goes up.

Not the answer you're looking for? Browse other questions tagged transistors amplifier npn pnp or ask your own question.