Why would one drive LEDs with a common emitter?

I've seen tutorials aimed at beginners suggest the way to drive an LED from something without enough current drive is this: 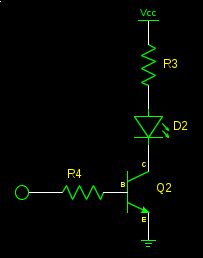 but why not this:

Option B seems to have some advantages over option A:

and the advantages of option A seem to be few:

but when Vcc is significantly greater than the forward voltage of the LED, this hardly matters. So, given these advantages, why would option A be preferred? Something I'm overlooking?

I would argue that there are fewer "gotcha's" with option A. I would recommend option A to people of unknown electronics skill because there's not a lot that can keep it from working. For option B to be viable, the following conditions must be true:

These conditions are not as universal as they might first seem. For example, with the first assumption, this rules out any auxiliary power supply for the load that is separate from the logic power supply. It also starts constricting values of \$V_{CC}\$ for a single LED when you start talking about blue or white LEDs with \$V_f\$ > 3.0 V and a controller running off a supply less than 5.0 V. And I think the other thing is that you can't really replace the BJT in option B with a MOSFET if you wanted to eliminate that base current.

Additionally, it is more complicated (marginally, but still) to calculate your load resistance. With option A, you can use an analogy such as "consider the transistor to operate like a switch". This is easy to understand, and then you can use familiar equations to calculate \$R_{load}\$.

Compare that to what is required for option B and there is the marginal increase in difficulty:

Couple that with the fact that the advantages of option B often are not needed. Aside from the reduced part count, the base current from option A shouldn't increase the power consumption by more than 10%, and LEDs are rarely (unsubstantiated qualitative guess) driven fast enough for BJT saturation to matter. 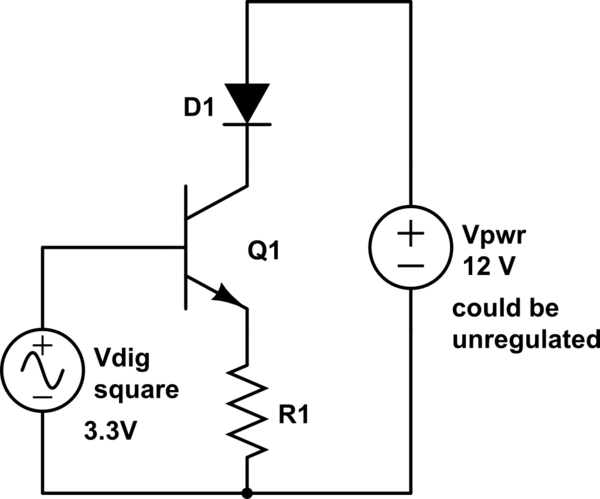 This turns the transistor into a controlled current sink, where the current is determined by the base voltage, minus VBE, across the resistor. The base voltage normally comes from a digital output of a microcontroller, which is fed from a regulator, so its value is tightly controlled. For example, if you're using 3.3V logic, and have a 270Ω resistor, you'll get a nice 10 mA through the LED.

The anode of the LED (or even a long string of LEDs) is fed from a higher voltage (which doesn't even need to be regulated), and whatever voltage drop that doesn't appear across the LED(s) appears across the transistor.

Option A on the other hand can easily drive any LED drop voltage assuming your supply rail is high enough and you don't reach the base/collector breakdown voltage.

Also keep in mind if you intend to drive multiple LED's in series you have to add up all the drop voltages of the LEDs.

Option A is a neat ON/ OFF switch. When BJT is saturated, LED current depends basically on Vcc and R3, so LED will have a constant brightness.

Option B is an "emitter follower" and makes LED current to depend on input voltage, as VE would be Vin -0.7.

Option B is good if you want to control LED current and brightness. But most of the times, it's better done with option A and a PWM scheme (more accurate)

I am not convinced about your implied assumption that the usual way is to use a the common emitter configuration. However, let's assume that's true. It's not worth going into the merits of the various approaches since that's not your question anyway.

I think the reason is that the common emitter configuration is the conceptually obvious one, and there is little more to it than that. Keep in mind who writes this kind of advice you "see on the internet somewhere". The guy that uses whatever method is appropriate for the particular design without it occurring to him this is even a issue isn't going to think of writing up a web page about how to drive a LED. It's the person who just spent 2 days figuring out which legs of the transitor is the collectorator, emisser, and base-a-ma-thing, then a week getting the microcontroller code to blink the LED that's going to proudly post Looky me world, I done blinked me a LED!!! For those people, the common emitter configuration is the conceptually obvious one.

Common emitter is sortof the poster case of how to use a bipolar transistor. It is more obvious how the transistor provides amplification. For the newbie, emitter follower and even worse, using a bipolar as a controlled current sink, sound like advanced concepts.

Not the answer you're looking for? Browse other questions tagged led transistors driver bjt or ask your own question.

0
npn transistor as a switch
1
NPN low transistor voltage in emitter despite high voltage collector
0
BJT switch connections
8
Transistor - Why does amplification happen before the transistor and not after?
8
Single LED single transistor circuit not working
11
BJT Driving an LED - Above or Below?
2
Why is my transistor ON when charge is only going to the base?
0
What is the total resistance of a LED array?
5
Basic help with calculating values for PN2222A LED circuit
5
Using an NPN vs a PNP transistor
See more linked questions

8
How can I effectively drive multiple LEDs with multiplexing?
0
Help with NPN and PNP common emitter
0
Help with understanding common-emitter amplifier
2
Why can a 74HC595 drive 8 LEDs?
0
Common Emitter Coupling
6
LEDs have a low glow "noise"
27
Why use two transistors driving LEDs when one would work?