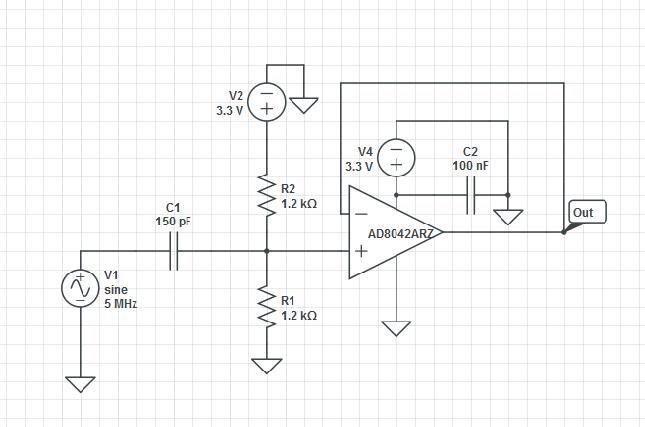 But I keep getting distortions on the node out. I'm using a single voltage supply and the sine wave I send in is between +/-650mv, from ground reference that is. The distortions consists of noise like patterns on the raising an falling parts of the sine wave, while the top and bottom is okay. Any ideas of what it can be?

This certainly sounds like instability. Is that opamp "unity gain stable". If not, that's the problem, and that's likely what is happening. If so, you have to use a different opamp if you really need unity gain.

Depending on the opamp and what you really need this circuit to do, you could try giving it some gain. To do that, put a resistor between the output and the - input, then a resistor and capacitor in series from there to ground. The resistor and capacitor will form a high pass filter. Your input coupling already high pass filters with a rolloff of about 1.8 MHz, so you can set the other filter a octave or two below that so as to not matter.

Added in response to datasheet:

You realize this is a video amp, right? You might have mentioned that earlier. High speed amps like this tend to be a finnicky, and you have to pay special attention to layout. You want a nice ground plane, careful decoupling, etc. This is a case where you really need a proper PC board or use RF breadbording techniques, no solderless plug-in breadboard.

The datasheet suggests that this amp should be stable at unity gain, but doesn't come out and actually say so that I found from a quick skim. You would normally use this kind of amp with a gain of 2 at least, like they do in the example on page 13. At these frequencies, you have to consider transmission line effects, so you are usually down by a factor of two due to driving thru a resistor, which then forms a voltage divider with the characteristic impedance. They aren't really expecting anyone to use this amp at a gain of 1.