Is it possible to construct a voltage doubler that both powers an opamp and is driven by it?

I have an application in which I need to drive a MOSFET in saturation to create a constant current load. I'm using an opamp in a fairly straightforward feedback circuit for this, but the current the MOSFET can conduct is limited, since my opamp is running at 3v, limiting its maximum gate drive voltage to roughly the same (the opamp is the rail-to-rail MCP6002).

Since the current required by the MOSFET gate is effectively zero, it ought to be possible to use a capacitative voltage doubler like the Dickson Charge Pump to increase the gate drive voltage. However, I would really like to minimize the number of components in this circuit.

I know an opamp can be set up as a square wave generator to drive a charge pump. If I have spare opamp circuits in my IC, is it possible for an opamp to double its own supply rail?

I tried mocking up such a circuit, but I'm fairly sure it won't work: 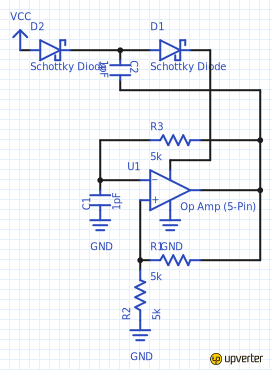 If I'm correct, when the opamp output goes high, the opamp is effectively shorting C2, which won't have the desired effect at all. Is there a way to reconfigure the circuit that will work?

As shown you have a perpetuum mobile, none of which work. You are using the opamp as the energy source for itself and that dog won't hunt.

You can do what you want if you use external switches driven by the opamp - 2 x bipolar transistors or MOSFETS. The opamp then supplies only the drive energy to turn the "switches" on and off.

Lots of ideas here but

An opamp version of the circuit below would do what you want. The opamp (here = 555) can be powered from the output - initially its Vdd is two diode drops below Vcc_in but this rises as the circuit bootstraps its own supply.

including circuit below from here - good design notes on that page.

The short answer is, no you can't.

The slightly longer answer is the reason you can't : a voltage doubler will indeed double the drive voltage (minus diode losses) but it is a far from ideal voltage source; it has a high output impedance (and one that is deceptively difficult to analyze - I can't find the recent question on that at the moment) but far too high impedance to drive the amplifier powering it.

EDIT : It can probably provide the "supply current" for the opamp itself; but that current doesn't include any current provided by the opamp's output into R1, R3 and especially C2. Include these and the actual supply current is far higher. END EDIT

If you need more voltage than a single stage of doubling can provide, you can add further capacitor/diode pairs fed from the same opamp, to build a voltage multiplier. I used a CMOS 555 timer to generate 60V from a regulated 12V supply. Unlike the circuit in Russel's answer, I omitted the transistor stage, feeding the capacitors directly from the 555 output.

3
Charge Pump for driving NMOS
1
How to bypass DC-DC converter with N-channel high side MOSFET
3
Floating charge pump for high side N-channel MOSFET bias
8
Any downside to using a charge pump for an op-amp negative supply
0
Charge pump for stepping up 9V to 45V
0
Can I share charge pumps between multiple L6206 H-Bridge drivers?
2
High voltage Dickson charge pump switching
1
Why does MOSFET N back to back switch work?