I am quite new to op-amps but have looked at them in college and have done my own research on them. I am trying to use an op-amp to build a simple band-pass filter which has an in-band voltage gain of 5. The main goal is to have a signal which is received from an ultrasonic transducer enter this filter. The signal will be a sine-wave in the order of a couple hundred millivolts around 1.1MHz frequency. I want the band-pass filter to limit the noise that passes through. I also want the in-band gain to be around 5.

Let me go through what I have tried already. I have been looking at Texas Instrument’s TDC1000 which is an “Ultrasonic Sensing Analog Front End”.

I have been looking in particular at the Low Noise Amplifier in the receiver path. I am trying to replicate the circuit seen in Figure 16 on page 14:

According to the datasheet, the in-band gain is set by the capacitor ratio:

The high-pass corner is set by the feedback resistor and capacitor:

The low-pass corner is set by the Gain Bandwidth Product and the gain:

This all seemed to make sense, however, other websites showed different circuit configurations for band-pass filters. Some circuits included another resistor before CIN and there was no mention of the "Gain-Bandwidth Product".

I decided to build my own version of the Low Noise Amplifier circuit that was presented in the TDC1000. Picking out an op-amp was tricky enough but after doing some research, the LT1128 seemed like a good choice. The datasheet for this op-amp can be accessed below:

It is a low noise precision high speed op-amp with a Gain-Bandwidth product of 20MHz. I built the following circuit on a breadboard: 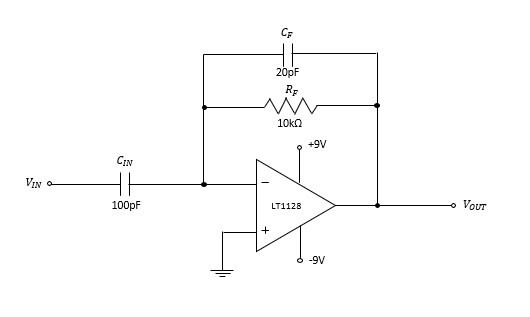 To test out the circuit, I applied a 500mV peak-to-peak sine-wave from my signal generator and varied the frequency. The circuit was not operating as I had expected. Below are a few screenshots from my oscilloscope. The yellow channel is the input signal, and the blue channel is the output of the LT1128. 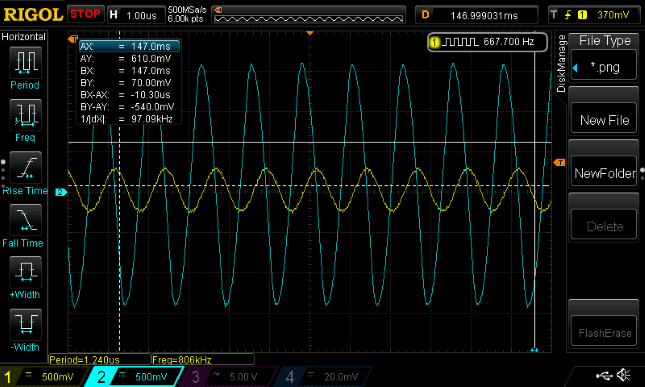 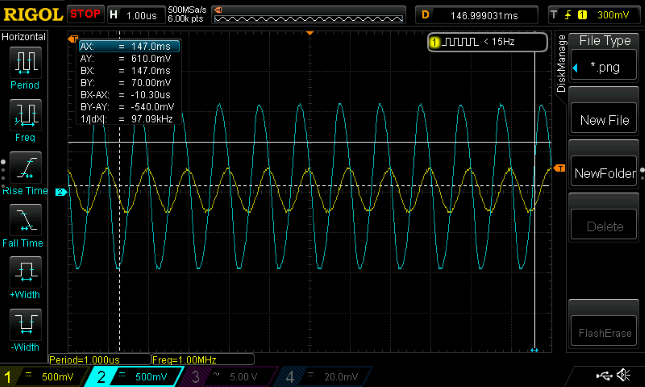 I decided to take a step back and just build an inverting amplifier with a gain of 4.7. Below is a schematic of the simple circuit that I built on a breadboard: 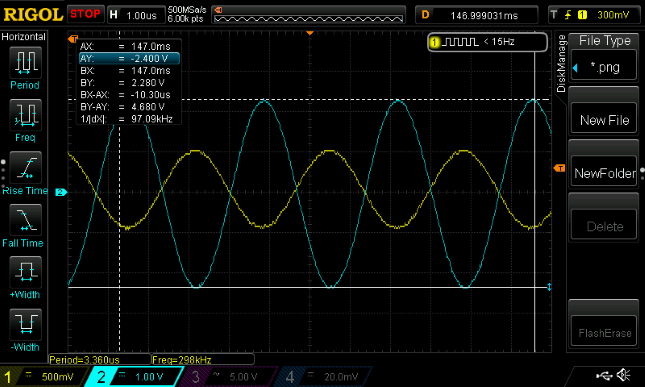 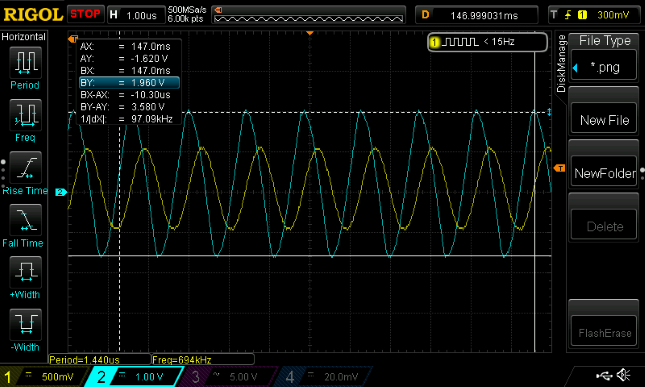 I am confused as to why this happens, I thought that the op-amp should continue to amplify the input signal at much higher frequencies.

I have done lots of research on the bandwidths of op-amps, but it seems that I am missing something.

If it’s the fact that I need to do more reading, does anyone have any recommendations?

A video amp would be better suited using discrete components.

Not knowing your source impedance is assumed to be 50 Ohms. Buffer with Emitter follower if higher or if lower adjust R according as Rb(eq)/Rin controls the closed loop gain of 5.

Proof of concept for a PN2222A 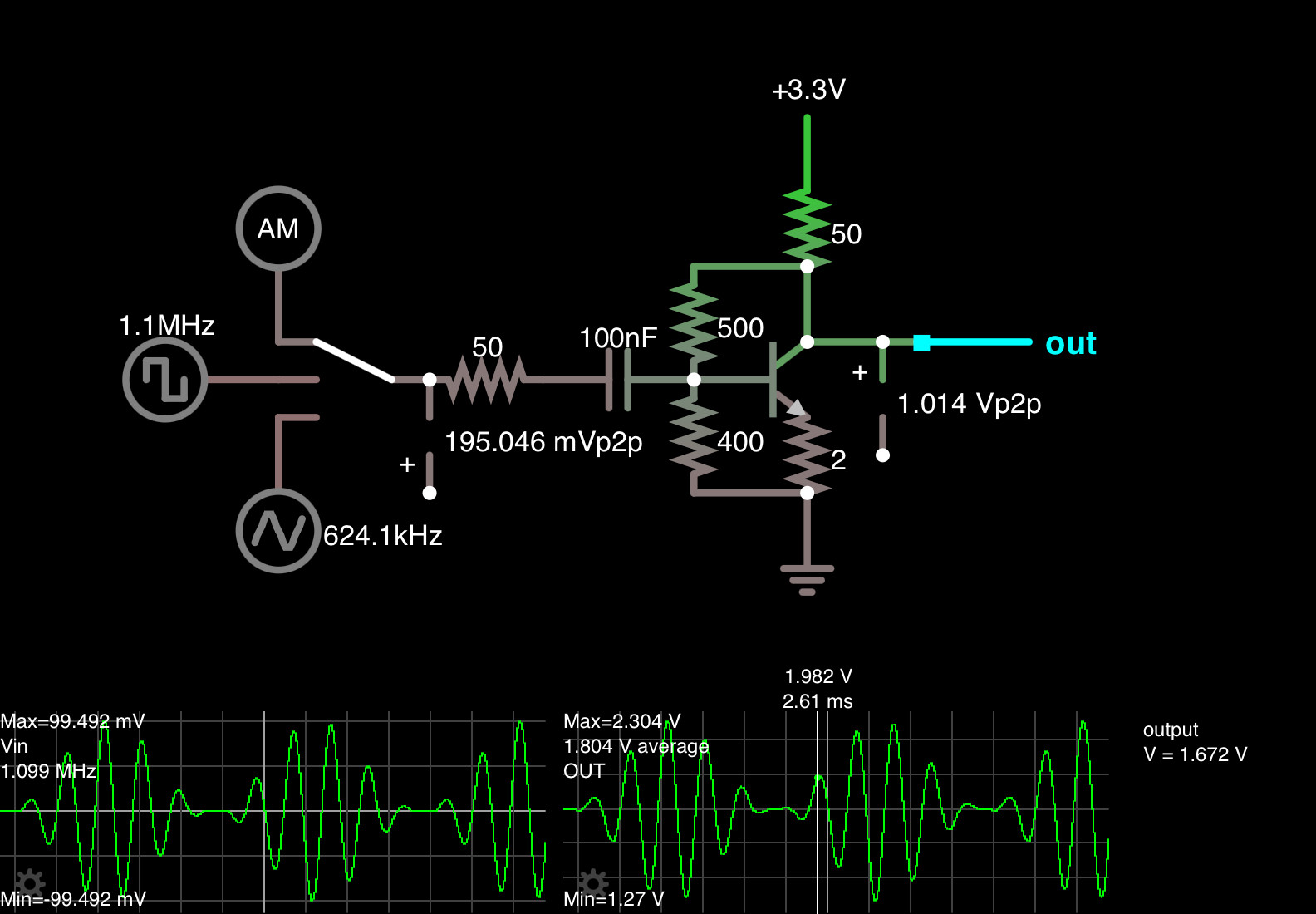 The reason why Op Amps in general are not well suited for amplifying in 1MHz band bandpass filters is the GBW product needed to overcome the Error in gain is also multiplied by Q^2.

This is my classic common emitter 50 Ohm amp using negative feedback. Gains are traded-off to improve linearity and increase bandwidth. Base pull down adjusts collector Q point for low gain. In other situations if Vc is too high (low Ic) then a bigger pull-up R base to Vcc is used to increase Ic and thus reduce Rbe and increase gain.

There are better transistors but the old PN2222A has a minimum current GBW of 300MHz which beats any “old” Op Amp ! This is what makes it work here.

AC coupling the input signal is necessary so the 100nF is just to isolate DC from input to base bias with ~1 ohm at 1MHz. You can make this bigger which affects bias settling time after T=(50+50)C =10us rise time.

Rcb/Rs=500/50 ohms sets the closed loop gain maximum of 10 which is further reduced by other base loads.

Rbe* = 25/Ic (mA) [ohms] is controlled by collector current , which makes it in the 1 ohm range thus reducing the open loop gain, so Re was chosen around the same or slightly higher for linearity vs gain reduction tradeoff.

Overall this is far better than an open loop H bias due to the excess gain used for error correction or negative feedback. Albeit only a small amount but sufficient.

If you need more linearity then more power can be used to achieve this with 5V and reduce Rbe from higher Ic and thus increase open loop gain for extra feedback from this excess open loop gain.

Rc =50 sets the open loop impedance and also open loop gain from Re is reduced by base to emitter load of hFE*Re.

The net result is the closed loop gain is 5x with an open loop gain of 20 to 50 so the excess gain, lowers both the base and collector impedance by negative feedback. This is similar to Op Amps effect with NFB except the excess gain being fed back is much less and there is no integrator as in the OA to limit the open loop gain, so it has much greater BW than your OA. (Depending on GBW of transistor)

The maximum output amplitude of an op-amp, above a certain frequency, decreases with frequency. From the LT1128 datasheet we have this graph 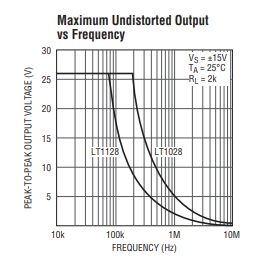 What this graph tells us is that even though a particular op-amp may have a unity-gain bandwidth of, say, 10 MHz, that only applies to very weak signals.

Not the answer you're looking for? Browse other questions tagged operational-amplifier bandwidth frequency-response band-pass gain-bandwidth-product or ask your own question.