What actually causes the distortion in the output wave due to an Astable Multivibrator? 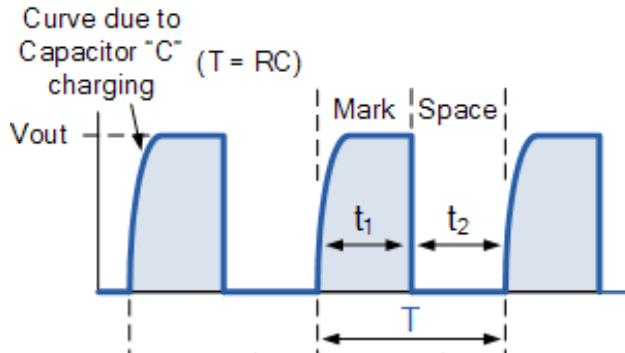 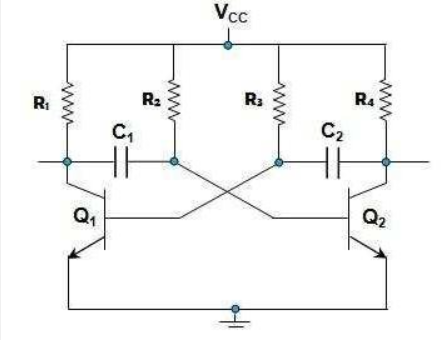 I've witnessed that the output square wave from an astable multivibrator using two BJTs has its edges rounded during the rise up time(just as it is seen in fig. 1). Across resources, I've come to know that this is due to the initial current drawn in by the capacitor, or precisely the way the capacitors get charged up. I'm aware of the way an astable multivibrator works, but I'm unable to understand how does the charging of the capacitor lead to a change in the rise up time of the square wave. Which part of the multivibrator is actually causing the nuisance here? Also, how can we actually show the error dependence in the rise up time with an error in that part creating nuisance, mathematically? It would be really helpful if someone could give a nice explanation with the mathematical workout in the dependence.

Let's assume that the output is Vout, at the junction of R4, C2 and the collector of Q2.

Start by understanding why the falling edge of Vout is so rapid. There's a relatively slowly rising voltage at Q2's base, as C1 charges, but the transition from off to on occurs only within a very small "window", perhaps between 0.6V and 0.7V. Thus in spite of the sedate pace of the rising base voltage, the transistor switches on comparatively quickly, as its base reaches 0.6V or so.

At that point, Q2 "instantly" becomes a dead short between collector and emitter, pulling Vout immediately to 0V.

However, when Q2 eventually switches off again, similarly rapidly, the transition of Vout is not rapid at all. This is because there's no such "dead short" to Vcc like there was to ground.

In the absence of a transistor to pull Vout hard and quickly towards Vcc, as Q2 did to pull it low, there's only R4 to perfom that function. In comparison to the "dead short yank" of Q2 to ground, R4 is merely a "gentle tug" back up!

The voltage across C2 changes only as fast as R4 permits, because together they form the familiar resistor capacitor series pair (don't forget, Q2 is off, and can be treated as if it were not even there). The voltage Vout, at their junction, will rise exactly as you would expect from such a pair, exponentially, with a time constant of R4 x C2, which is what you see in the graph.

I'd like to point out that this is somewhat simplified, because there is also Q1's base and R3 to consider, but the dominant players in the rise of potential Vout, at Q2's collector, are C2 and R4.

In summary then, Q2 switches on rapidly, dropping Vout to zero more-or-less instantly. But when Q2 switches off, it is the combination of C2 and R4 that determines the rise of Vout, which is approximately the classic exponential curve with time constant R4 x C2.

This circuit is little tricky means if you not design it properly it will not oscilate, roundings on outputs can become extreme or another thing even small ripple in Vcc can cause false oscilation.

Regarding the roundings you can avoid them with high ratio R1:R2, lets say if you choose R1=1k you must use R2 about 47k at least. The reason is R1 charges C1 and you want to do it as fast as possible to roundings be a minimal in comparison to all signal waveform. But remember this high R1:R2 ratio require high beta transistors (I woulds say 200 at least).

Not the answer you're looking for? Browse other questions tagged distortion multivibrator astable or ask your own question.

0
How to actually calculate the rise time for a square wave generated by an Astable Multivibrator?