How to achieve high impedance input on OPAMP without sacrificing bandwidth

I was trying to simulate (In LTSPICE) buffer for ADC 08200 that would have 1Meg input impedance it is about to be used with standart oscilloscope probes. But I am having problem with bandwidth limiting. So far I have tried OPA354 and LMH6702 and both suffer from this pitfall.

What is correct way to make high impedance ADC buffer?

So far I have came to this as circuit with best result (as far as bandwidth goes, but it's having very high attenuation). I am simulating 1:10 probe with 9Meg resistor. 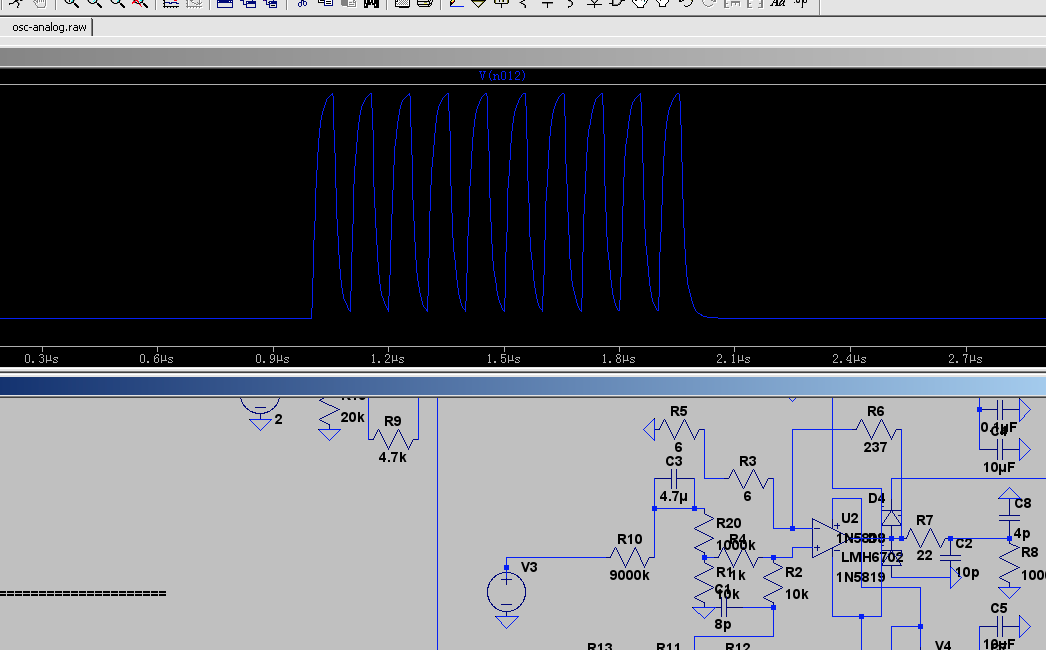 I have redesigned the circuit but I am having weird problem with simulation and I think that circuit should work but I am getting very small negative voltage out of OPAMP even thought it's supplied by positive rail only.

This is my schematic now: 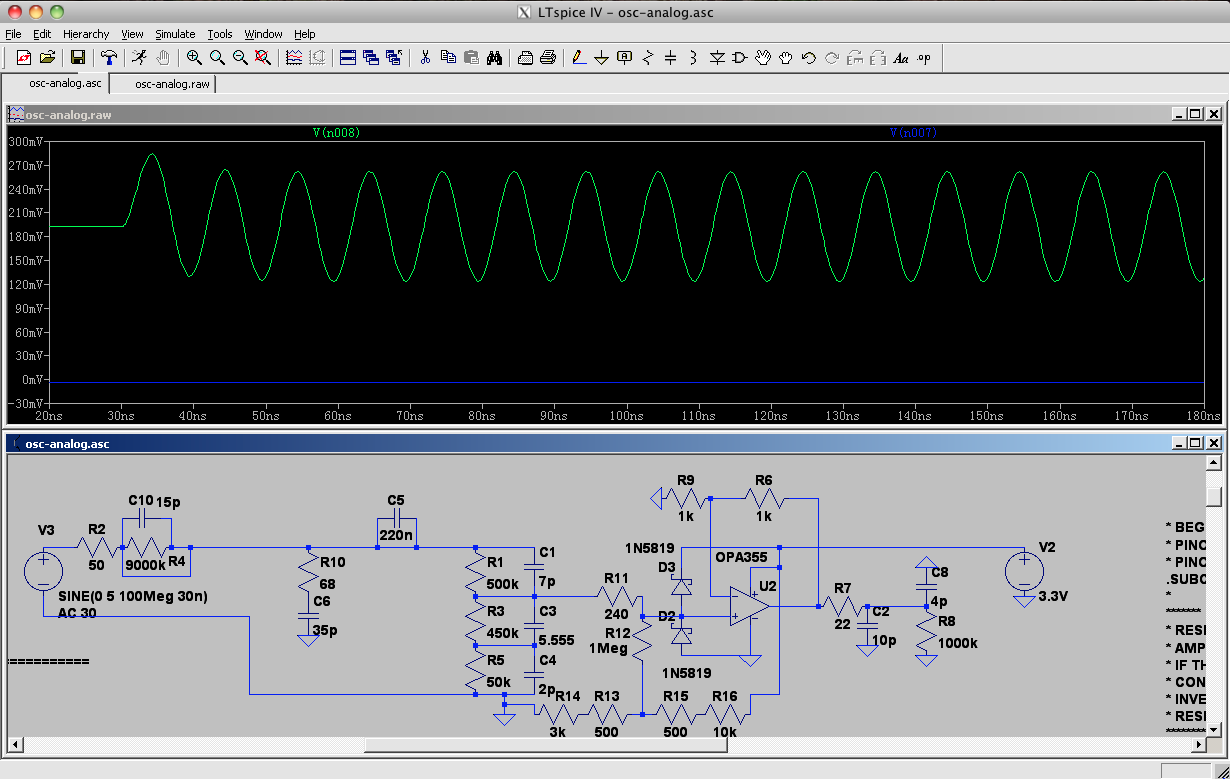 Blue trace is output of OPA355 and green trace is non-inverting input.

R11 and R12 are used for offset adjustment. C5 is AC coupling capacitor (if used).

//Edit3: Fixed model of OPA355 now, but I am having different problem.. on certain frequency it seems that there is some parasitic capacitance charging, but I have no clue where .. Same trace is for non-inverting input, output and inverting input... 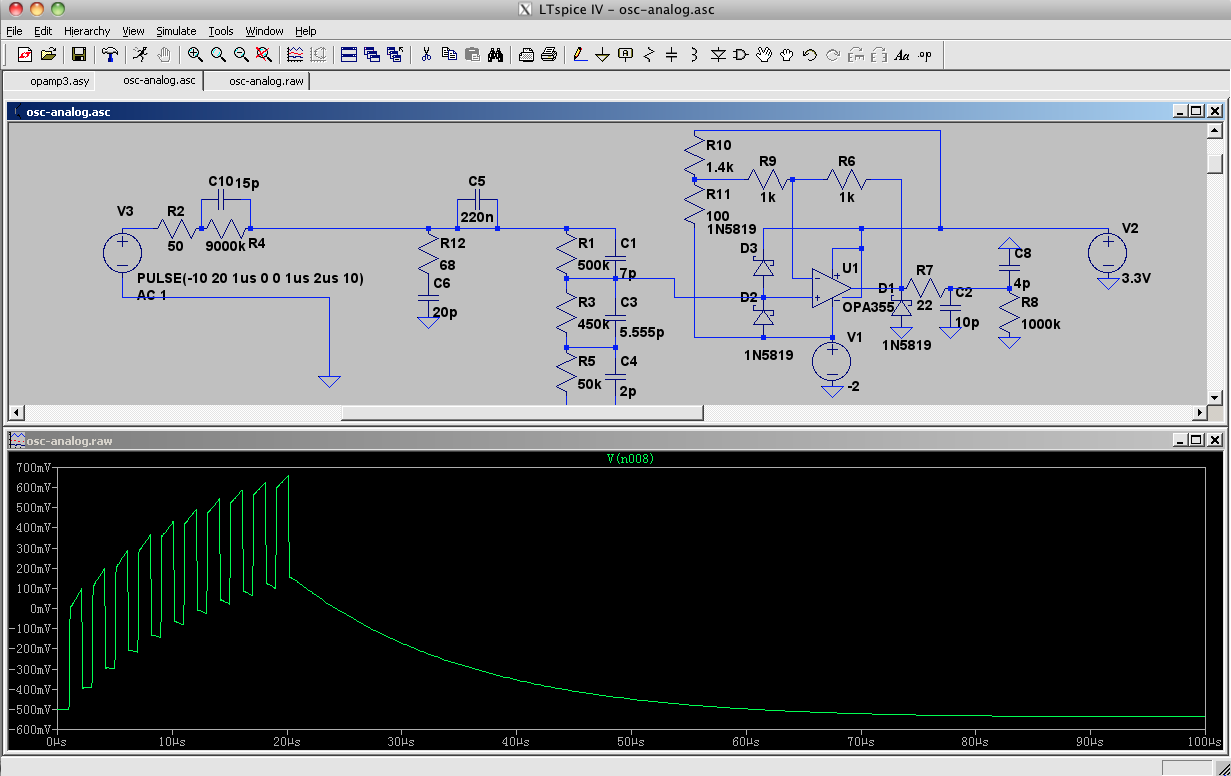 One other factor, though, is the input capacitance of these op-amps, 4 pF in the case of both these example op-amps. This capacitance itself would load the incoming signal, if the signal frequency is very high.

As the question does not state the desired bandwidth, the suitability and capacitance impact of the suggested op-amps can not be verified. Using a spice model for one of these in the simulation may help in this.

Based on subsequent comments, for a 100 MHz unity gain bandwidth desired, the Texas Instruments OPA355 or OPA356 would work, with their GBW of 200 MHz, and input impedance of 10 TeraOhms coupled with capacitance of just 1.5 pF.

The problem with your simulation is possibly not the bandwidth of your input amplifier; it is the model of your 10:1 oscilloscope probe.

You are modelling it as a 9 Megohm resistor; feeding a (nominally) 1 megohm input stage.

A typical oscilloscope input stage is actually 1 megohm in parallel with 20pf (capacitance varies according to scope model) and so the probe must take this into account.

It does so with a small capacitance in parallel with the 9Megohm resistor. To cope with 20pf input capacitance, the parallel capacitance should be 1/9 of this value, or around 2.22pf. Such a capacitance is difficult to generate; so a variable capacitor is used, and you have probably undergone the ritual of calibrating a new (or borrowed!) scope probe before use.

The waveform you show looks like a very badly calibrated scope probe, so you need to do the same with your SPICE model, before worrying about the opamp. Try 2pf across the 9megohm resistor, adjust the value for maximum flatness of a square wave. (Or compute the value to use, from the details of the opamp model). If the result still isn't good enough, then try Anindo's suggestions.

EDIT : it is difficult to read your schematic : if the 1000k resistor is really in series with the opamp input and the capacitor C3 is really shorted out, there are other problems to fix first.

Brian is right about the probe and the need for a parallel cap. Also, combined with the high input impedance, the tiny input capacitance of the opamp makes a big difference at high frequencies. The 2pF combines with the input resistor to form a low pass filter. I can't see from your schematic what exactly you are modelling, but I'll discuss both the probe and scope input itself.
If you want to model a probe more accurately, you will need something like that shown below from the linked pdf, with a 9MΩ and parallel trim cap on the probe side, then transmission line and compensation at the input side. You can then add this to the circuit shown below for a full simulation of both probe and input + buffer.

Having designed/built a couple of reasonably high speed (up to 500Msps) DSOs myself, I can say the front end can present just as many issues as the FPGA design, layout, etc. It's where many of these low end handheld scopes fall down (for example see Dave Jones review of the QDSO)

Assuming you have a good quality probe with a compensation circuit at the BNC end (probe design is an art in itself, the T-line is intentionally lossy - see The Secret World of Oscilloscope Probes for an excellent read) then the front end divider needs to allow for the op-amp buffers input capacitance.
Here is a "typical" scope input example circuit which divides by 2 and 20, that illustrates the difference between compensation/no compensation with just 2pF of input capacitance. 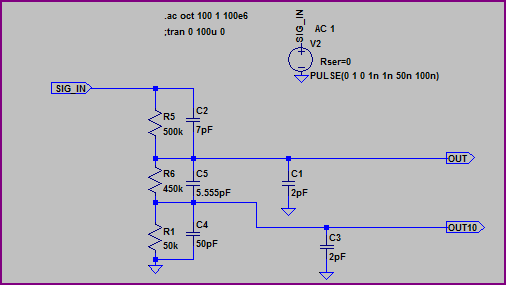 AC Sweep Simulation up to 100MHz

Hello guys I have managed to get something like this, it's complete preamplifier with simulation of probe as lossy transmission line. 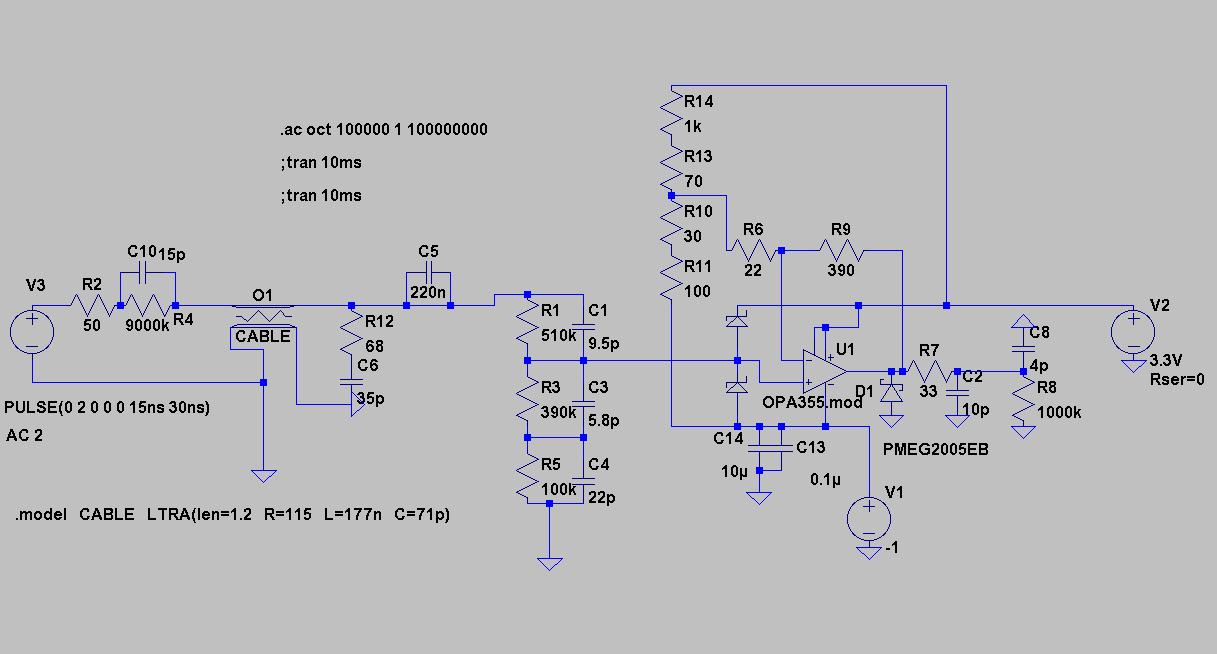 Which has frequency response like this (measured at R8), it has -3dB cutoff just somewhere at 100MHz. 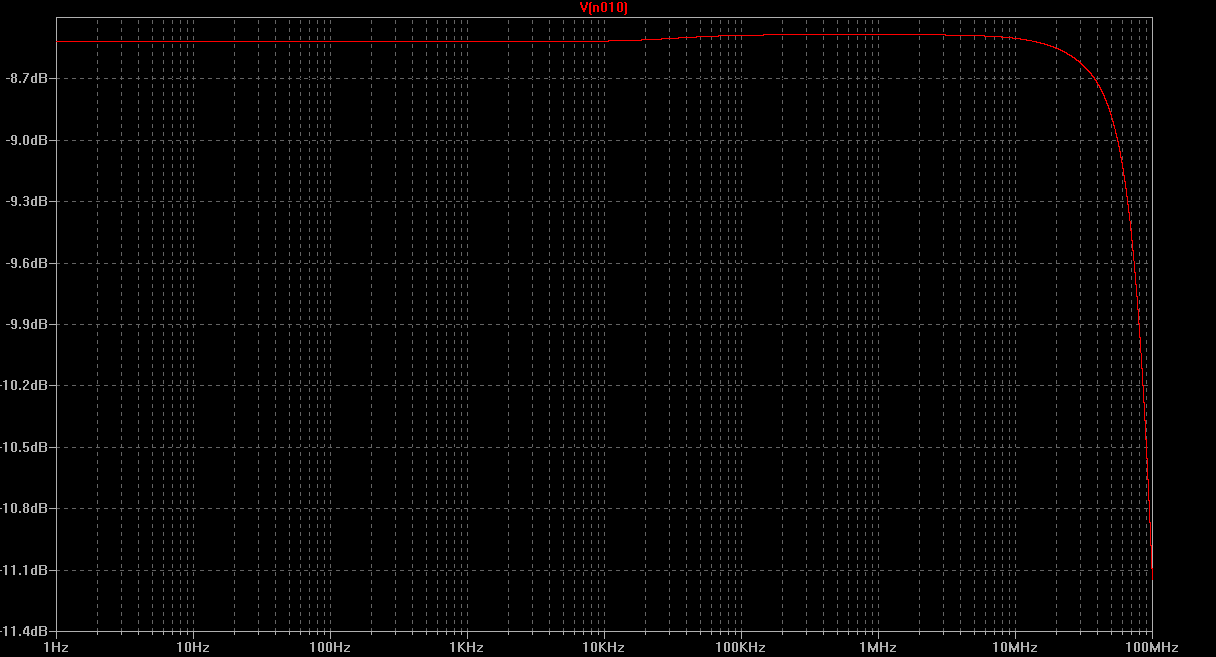 Which is actually quite neat for 200MSPS ADC I'm about to use.

Do you think that it could go better with this OPAMP? I'm just curious I think this will do.

Not the answer you're looking for? Browse other questions tagged operational-amplifier impedance or ask your own question.

3
Opamp output at high frequencies
3
How to deal with the opamp input offset in a circuit with multiple opamps with inputs connected together?
1
high output impedance sensor with voltage output
1
High impedance opamp attenuator
1
Confusion with a measurement method suggested for an opamp input impedance
1
What is a good circuit for recording a piezo contact microphone or an electric guitar pickup?
0
opamp voltage offset balance resistor for varying input Z
2
Determining Impedances of an Op-Amp Circuit
0
Floating input in Op-amp Readout Circuit?
2
Understanding the NE5532's opamp input impedance