I know how to make a signal generator from a 555, but i don't know how to adapt this to drive the speaker magnet.

-Do I put the output to a "power transistor" or a MOSFET? I have only used them for signal amplification before not power supply..

Any tips, Circuits or transistor recommendations will be VERY appreciated... I am fairly proficient at electronics, but this eludes me completely as it is taken for granted in most instances, or they use a 300€ amplifier....

I already built a signal generator.

The EighteenSound 12W500 speaker has a datasheet available here. 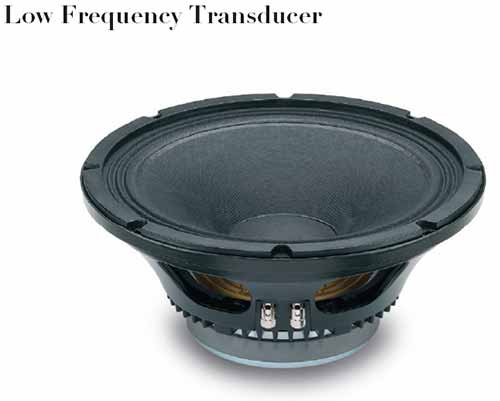 As per the datasheet, the AES power rating is 350 Watts, with a minimum impedance of 6.4 Ohms across the operating band of 50 to 6000 Hz.

Calculating voltage and current values as per this:

If you drive this speaker single-ended, i.e. with a single DC power supply, the final drive stage transistor or driver IC needs to deliver up to 133.87 Volts (instantaneous peaks), at up to 20.92 Amperes (design peak values), and the power supply needs to be able to supply a sustained 350+ Watts - a 400 Watt 150 Volts DC supply would be a good design goal.

If the speaker is to be driven using a balanced (split supply rail) design, the values needed for each of the positive- and negative-side drivers would be up to 66.93 Volts each (instantaneous peaks) at 10.46 Amperes. The power supply still needs to be capable of the same 350+ watts, so 200 Watts per supply rail (say +80 Volts, -80 Volts) would be the supply design goal.

If these voltages are too high to deal with, a Bridge-Tied-Load configuration could be used with a split-supply design and two identical output amplifiers, designed to work with 16 Ohm loads per amplifier. For such a configuration, the power supply needs to have two rails, at around +45 and -45 Volts respectively, again designed to sustain 200 watts per rail.

The voltages do not scale down proportionately because amplifiers require a voltage headroom, which does not scale down in proportion to the output voltage but remain comparatively constant. Not providing that headroom will cause your signal to be clipped at the peaks and troughs, thus introducing undesirable harmonics, and an audible harsh buzzing sound.

While these voltage and current levels computed above are pretty high for designing with discrete transistor circuits, there exist several purpose-built power audio amplifier ICs, or alternatively some high power op-amps, that should be considered for such purposes.

Some examples of possible integrated parts are below - Please note that these are not specific to this question's requirements but are meant as a general resource for future researchers reaching this question. Many / most of them are for lower power or lower load impedance than given in the question.

Adding datasheet links to all the above parts would take too long, so this is left as an exercise for some kindly soul to edit in.

The last example above is provided to show that some very capable pre-built modules can be bought online, sometimes at prices considerably lower than the sum of retail prices of the constituent components.

The required power supply unit will be probably the biggest cost element to build, as also the most difficult to find prebuilt without opting for name-brand high priced units.

A search on sites like eBay will yield several pre-etched PCBs and some kits which can deliver the desired voltage and current. It is worth checking the specifications of such kits carefully before ordering, however. Since these are not validated big brand products, a recommendation would be to opt for parts rated significantly higher than the computed values above.

An alternative is to use a pair of high-voltage high-current switching power supplies with adjustable, floating output voltage, such as are sold for large LED display boards. These may introduce a bit more noise than supplies designed for audio use, but for the purpose of driving a Chladni plate transducer, such noise may be acceptable.

There are thousands of power audio transistors, just google for these three words and you'll have more suggestions than time to devote to read them. What about ON's MJE15028. It apparently handles 8 Amps, up to 50W and comes in a classical and handy TO220 package. Remember some basic design tips:

and... designing a basic power stage is not very different (if we don't get into the hi-fi subtleties) from a signal amplifier stage.

A basic design would be based on the common emitter amplfier. Use tools like LTSpice to simulate your design. A more ellaborated design would be a push-pull with two complementary BJT's.

Not the answer you're looking for? Browse other questions tagged audio amplifier or ask your own question.