Does the LT1364 normally get warm when it is in circuit?

I recently tried to build a differential probe using the LT1364.

Upon powering up with the relevant bypass capacitors and whatnot, I realized that the LT1364 became uncomfortably warm.

I am not used to op-amps running that hot so I put some low value 10 ohm resistors in series with the power rail, to act a bit as a filter with the bypass capacitors and to also allow for current limiting to the LT1364.

I also tried using the LT1364 in a very simple square wave oscillator, using the same configuration (i.e. supply rails ballasted with 10 ohm resistors plus appropriate bypass capacitors. Later on I tried without the resistors.) The same problem persisted, the op-amp became warm.

Later, I founnd out something absolutely moronic. With nothing connected, and the op-amp inputs connected up so they don't cause oscillation in the chip, the damn chip gets even hotter.

The method of connecting the inputs to the output in a voltage follower form and short one of the inputs to ground is supposed to be how it is done, but that just causes the op-amp to draw more supply current instead.

I would be comforted if I checked my LT1364 and found that it does not work, but in fact, ALL the chips I bought worked, and ALL of them get hot under power.

These chips cost me close to a hundred fifty in total, and are direct from Mouser.

I had a look at the internal diagram of the op-amp and noted that it had a input stage quite similar to a current feedback amplifier. Is that the reason why behaves so different to other op-amps I own? (Like the LF356, 4558D, 741, TL072, etc.)

The problem with heating is that the slew rate + bandwidth of the LT1364 dependend on the chip temperature. I am also curious as to why this is even happening, and how to somewhat solve this issue.

Schematic of what I had used while playing with the LT1364s I own: 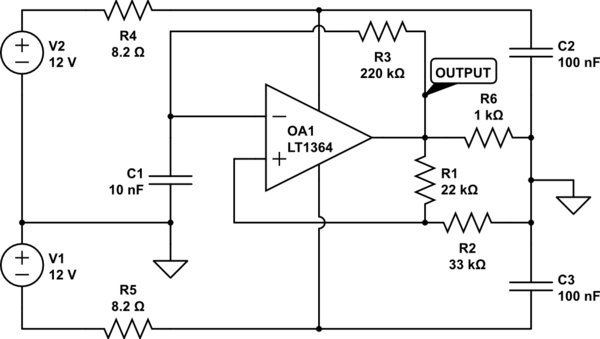 With this set-up, the current draw on the dual power supplies is around 22mA. The same circuit is mirrored on the other op-amp package on the chip. For ease of reference, here is the datasheet provided internal circuit of the LT1364. 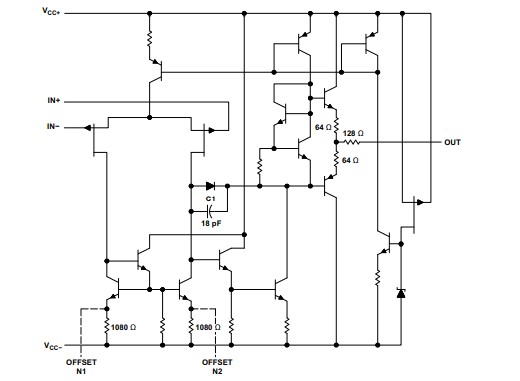 As seen, the two input stages are definitely different, the LT1364's looking more like one of those CFOAs. Is this why the performance is different? Perhaps I am using it wrongly?

Without a complete schematic (and your question reads a bit more like a rant), it's hard to give complete answers, but..

According to the datasheet, the typical current draw is around 6.3mA at +/-15V. If your supplies are +/-15V that's almost 0.2W which is enough to feel warm (or even to exceed the maximum dissipation at high Ta).

You can reduce the dissipation by reducing the supply voltage or maybe by increasing the feedback resistor values, but both will affect the way the circuit works. In fact the GBW is typically only 50MHz at +/-5V vs. 70MHz at +/-15V

As to "why" you'd need to analyze the circuit in detail- transistor hFEs and non-thin-film (diffused or ion-implanted) resistor values change a lot with temperature, like +400 to +1500ppm/°C).

That schematic was most confusing the way it was drawn! See Jonk's two rules on Learning How to Draw Schematics.

Why do you have positive feedback (R1) and gain that gets very high at higher frequencies (C1)?
The quiescent current draw is around 6mA. At 24V that amounts to 144mW. The LT1364 has two sections, so, that's 288mW. On page 10 of the LT1364 data sheet you'll find that the junction to ambient thermal resistance is 130°C/W. Thus, you would expect the junction temp to be around 62°C = 130°C/W * 0.288W. Not horrible, but getting on uncomfortable to touch. Of course the case temp will be less, but that depends on a lot of variables.

The next thing is your output is probably pegged to the power supply rail since you have positive feedback. Closer examination, your circuit is an oscillator. A check with an oscilloscope or volt meter will verify this. If it's pegged to the rail, then you have extra current draw through the output resistor and feedback network which will add extra power dissipation.

Try make a proper negative feedback topology, get rid of the positive feedback and see if things get better. Be sure to use an oscilloscope to monitor the output and make sure it isn't oscillating. If you reduce the power supply voltages, this will get cooler.

According to the datasheet, the power supply current for each opamp in the package is over 8mA (see page 4). Thats a total of 17mA between a potential difference of 24V, meaning that even without any output current, your device is dissipating: $$P_{SUPPLY} = I \times V = 17mA \times 24V = 410mW$$ That thing's going to get warm! Now consider the maximum power that each opamp could potentially dissipate while sourcing or sinking current through a 1kΩ load to ground. With ±12V supplies, this condition occurs when the output is at ±6V (see Maximum Power Transfer Theorem): $$P_{DRIVE} = (V_{SUPPLY} -6V) \times I_{LOAD} = 6V \times \frac{6V}{1kΩ} = 36mW$$

I think all your heating problems can be traced back to these simple causes. The TL072 (and many other devices) will not get as hot because it only draws a little over 1mA per opamp. In that case the dominant cause of heating could well be power disspated in the output stage while driving a load.