How does this glass-protected surge absorber work? 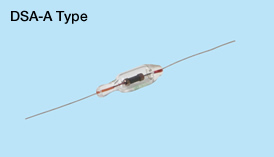 Is there a gas that changes the electrical property of the material?
It's the first time I've seen this type of component on a board, and I'm curious about its proprieties and applications.

It is a precision microgapped conductor <<1 Ohm in an inert gas that goes thru the normal fast pre-glow ionization microsecond period then arcs much faster as an avalanche feature like all gas tubes with follow-on current that must be limited by a varistor to be safe.

It would be faster than a large gas tube with selectable gaps for a range of breakdown threshold ranges and is only ~2pF in normal mode.

This seems to be a spark-gap type of device that enclosed to eliminate the variability caused by humidity. Mitsubishi calls in microgap technology.

This Mitubishi patent says there is an inert gas in the tube.

There is a gas, but it is there for the opposite reason: to not change the properties of the materials.

First of all, this is about control. Since this type of device is there to provide protections against arcs, a designer may not want to be susceptible to changes in the environment causing changes in the protection's behavior. E.g., you do not want higher relative humidity to lower dielectric strength and make arcs happen in lower voltages. Hence, you have an isolated (usually glass) tube and a controlled gap between electrodes, which should be the "easiest path for an arc to develop". The tube, besides holding the glass, also serves as insulation to prevent the arc from travelling to the board through a weaker path and possibly to an uncontrolled point of the circuit.

Also, devices like this, with a micro-gap, are usually faster than devices with bigger gaps (some of them can be seen in this EEVblog episode, so they can start to absorb the energy faster. This grants more time for the next step in the protection chain to "turn on" (and then absorb larger surges) while still protecting the circuit from absorbing the surge themselves.

Finally, by constraining an eventual arc inside the tube there are two other useful consequences, if the surge happens within the design limits of the device:

These two allow the protection circuit to be ready, with minimal effect, for the next event.

In the end, protection circuits like this and other spark gaps/tubes provide a path for the surge current to turn back, while allowing time for the fuse to blow up. At the same time, when the arc occurs and closes a loop through the gap, the voltage between the terminals of the protected circuit is lowered.

The DSA-A-type combined with varistor or a cement resistor can be used as surge-protecting elements in power supplies.

Not the answer you're looking for? Browse other questions tagged components protection or ask your own question.

4
dsPIC33 Code Protection, how does it work?
5
How does this reverse polarity circuit work?
6
What are the characteristics of a memristor?
14
How could I identify this thermistor
1
Component identification 8Y
2
What Electronic Component Marking On A Circuit Board Is Designated For BF?
17
Which glass encapsulated component is this?
3
Identifying SMD component 22P W8
2
Toshiba T1200XE PSU repair. Identifying some SMD component 222/22Y