Astable multivibrator malfunctioning on circuit board 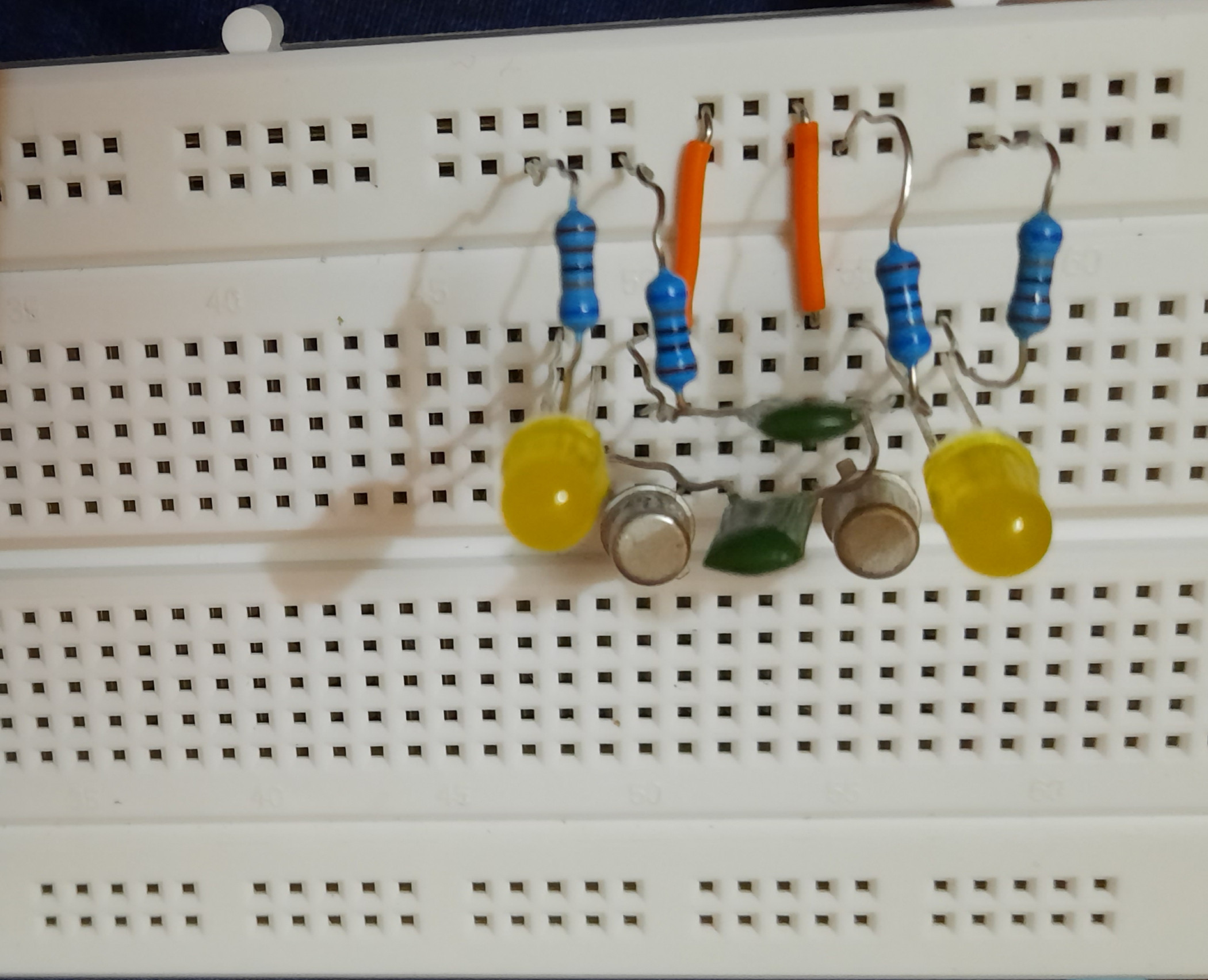 Note: I'm using BC107B transistors instead of BC547 as they are quite similar.

To test the circuit, I added two diodes (as shown in the schematic,) but instead of blinking alternatively, they glow together, and don't turn off. 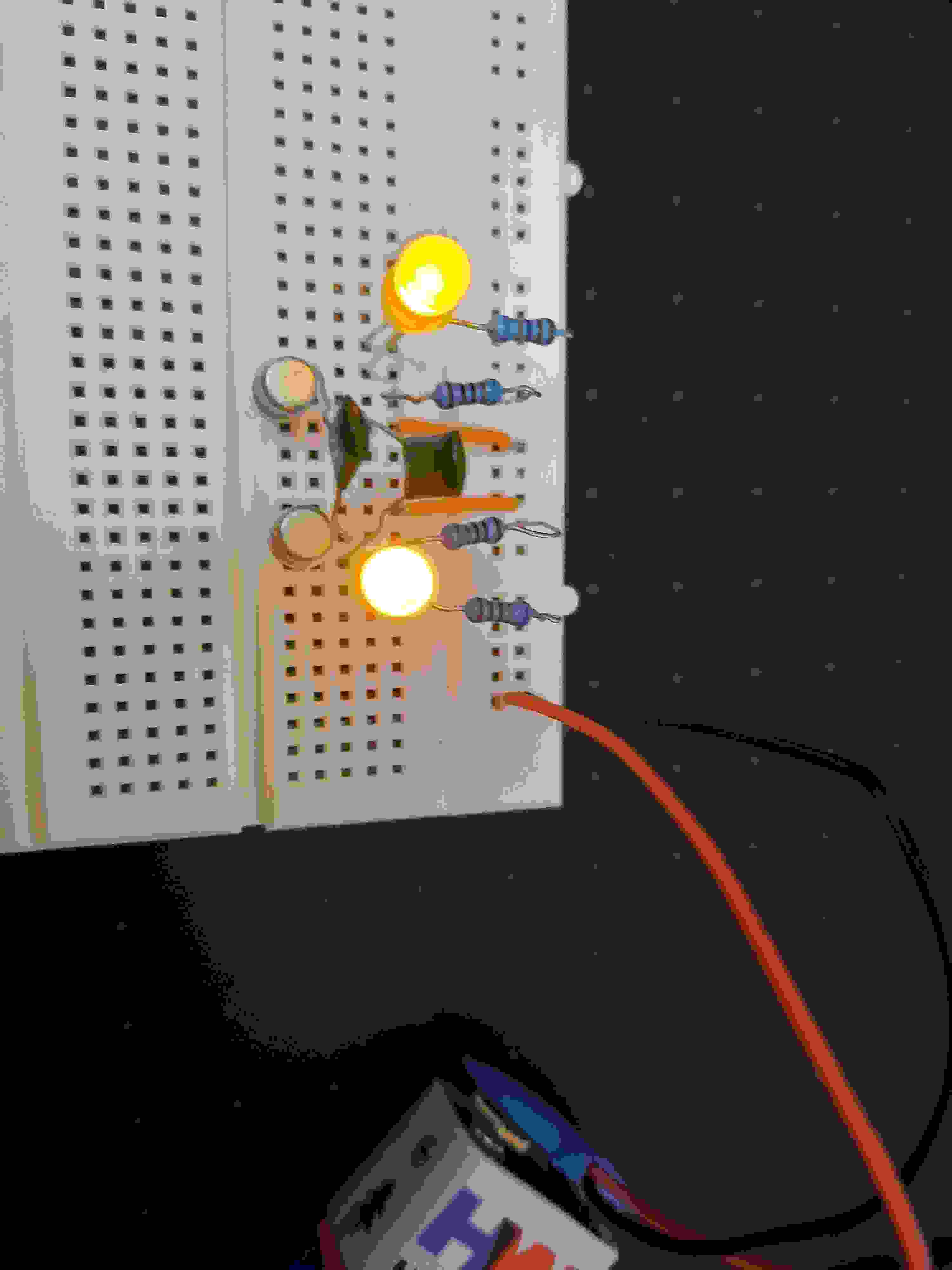 I can't seem to understand the problem behind this occurence. When I connect the collector of a transistor to the red clip of DSO138 and the ground to the black clip, I don't see any square waveform of peak voltage 9V. It just stays at about 0V, indicating that the collector is grounded. I don't understand this.

I've looked up online resources as well where people have built the multivibrator in the exact same way, but it has been working perfectly for them.

Can someone try to help me out in this?

The values you show in LTSPice don't really give the circuit a fighting chance to oscillate. There isn't enough bias current on the input nor enough swing on the outputs to make things happen. The resistor values are just too large.

On your breadboard on the other hand, if those 680k resistors are actually 680 ohms, you have too much base drive. The transistors are saturated, so both LEDs are stuck 'on'.

So we need to adjust this a bit to get the biases so that the circuit can oscillate. Roughly speaking, we want the LED (collector, Ic) currents to be about 10mA, and we want the base bias current (Ib) to be somewhere between 1/10 to 1/100th of that.

A quick pass with a simulator and I get the following:

This simulates ok and gives a stable 24 KHz. You won't be able to see it on your breadboard though, the LEDs will appear to be at half brightness.

If your intention is to make a visible flicker you will need to scale up the caps - a lot. Try the following: replace the caps with 10uF. You will get a flicker at about 8Hz. Next, increase the base pull-ups to 68k and you get about 1.1 Hz.

Here's a sim you can play around with (simulate it here): 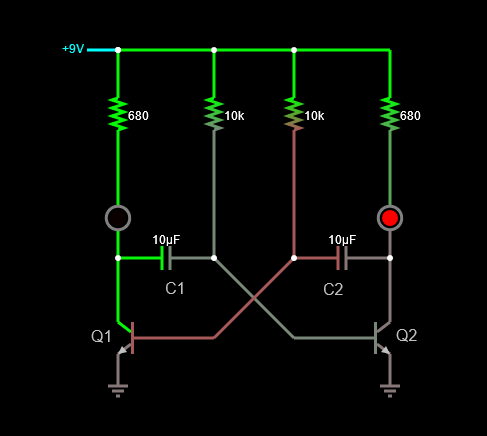 680R is appropriate for diode current but can be less current.

The blink rate is so fast they are both on although they don’t go off completely.